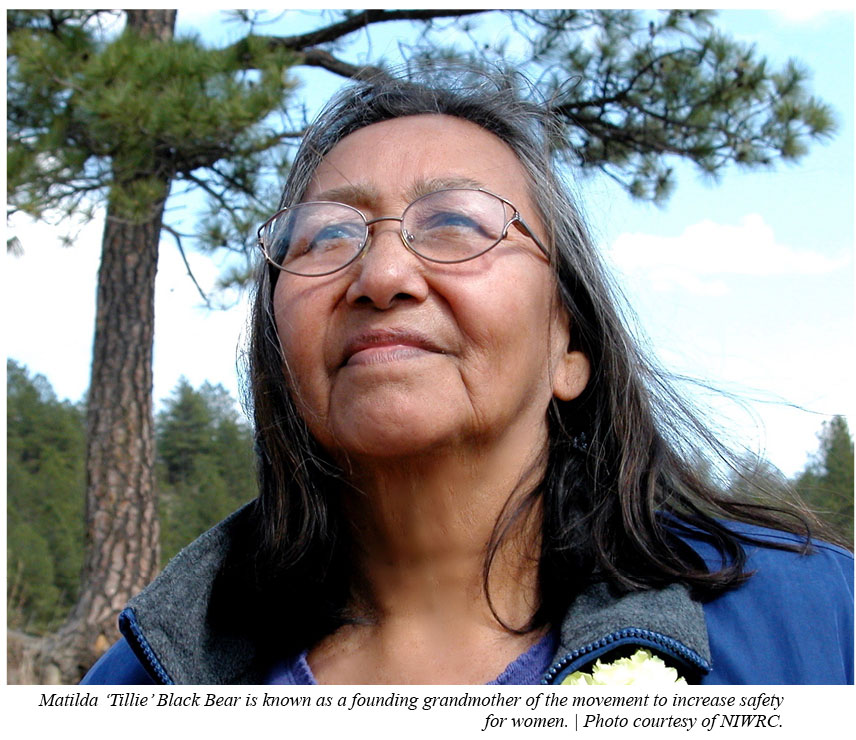 A large part of the legacy of U.S. colonization is the cultural genocide committed against Indigenous peoples. For the movement to increase safety for Native women, it is reflected in the erasing of the leadership roles of Native women, their names, struggles, and victories. The public honoring of historic personalities shapes who we, as a society, uphold as cultural icons.

“As Indigenous peoples, and women, our story is not taught, recognized, or honored by mainstream America. This erasure from the public eye is part of the continuum of dehumanizing Native women,” said Lucy Simpson, Executive Director, NIWRC. “NIWRC, as an organization, is committed to unraveling the cultural foundations of violence against Native women. Telling our story is part of decolonizing.” The federal laws and policies preventing full protection of Native women continue to legally justify the failed response of the government, but the social normalization of such violence is culturally based. The lack of public acknowledgment of the heroines that defended their nations, the grandmothers who stood against the criminalization of those ways of being a Native woman, must be challenged by inclusion and speaking our truth.

In 1978, Matilda Black Bear emerged as the first Native woman to advocate for battered Indian women at the national level. She continued in the movement for safety until her passage in 2014. Known to the movement as “Tillie,” she was well recognized as the Grandmother of the Battered Women’s Movement for her leadership spanning almost four decades. A citizen of the Rosebud Sioux Tribe, Tillie believed in the teachings of White Buffalo Calf Woman. One of the first teachings White Buffalo Calf Woman brought to the Lakota people was that even in thought, women are to be respected. Tillie was given the Lakota name Wa Wokiye Win, which means “woman who helps everyone” in English, a name she fulfilled in life. 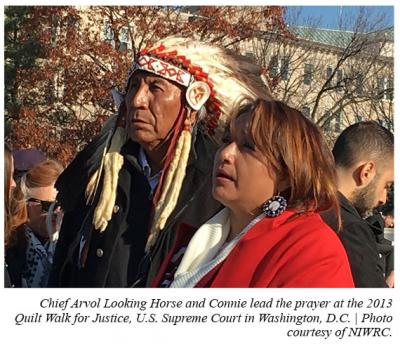 Tillie provided leadership at critical moments of our struggle for safety and sovereignty. Her handprints rest on historic national legislation and the founding of organizations to advance safety for women and a national agenda for strengthening Indian nations’ sovereignty.

“Today, we come together to recognize my Ina for her contribution to making the world a safer place for Native women, and for all women. I say this because if a Native woman can be abused, raped, go missing, or be murdered and nothing is done …. than other women at some point can also be in danger of suffering the same violence. So today, this October 1st, we stand together, to say our prayer for healing. We stand together to raise our voices to restore respect for Native women and to reclaim our sacred status. We join to raise our voices to restore the sovereignty of our Tribal Nations to protect women, children, their peoples, and also their lands and most sacred sites.”—Connie Brushbreaker, Daughter of Tillie Black Bear

“Today, I would like to honor Tillie. I have known her all my life, and she is a relative. Tillie always talked about the women society, and that it was a woman that brought the sacred pipe to the people, and she would always tell me “remember that.” At different times she would come to Greengrass and bring food and offerings to the sacred bundle. I always remember her words today and how strongly she believed in our traditions, and our culture. Tillie was a great leader amongst our Nation.”—Chief Arvol Looking Horse

“Tillie was a leader and inspiration, a teacher, a mother and in many ways part of the soul of our movement. The NCADV has been in place for the last 40 years and we are still a grassroots movement, and it is in part because of Tillie Black Bear. She was the first woman of color to chair our board. Without Tillie I believe there would not be some of the activist elements that we still hold on to today. Tillie lives on in the work of NCADV.”—Ruth Glen, CEO, National Coalition Against Domestic Violence

“Miiyu Poolov Temet (hello and good day), I know Tillie’s spirit is soaring up above. A lot of you knew Tillie as Unci (grandmother), or muske (sister), but I knew Tillie also as Ina (mother). Tillie shared with us the teachings of the White Buffalo Calf Woman and set the marker for our work. She reminded us to go back home and revitalized our creation stories. She was instrumental in starting our coalition and our Avellaka Program here on the La Jolla Indian Reservation. Tillie was proud of our movement and thought it was Native women’s leadership at its best.”—Wendy Schlater, Vice Chair, La Jolla Band of Luiseno Indians, and Treasurer of the NIWRC Board of Directors

In 1978, as a young woman, Tillie testified at the first U.S. Commission on Civil Rights hearings on wife beating. That same year, Tillie went on to lead in building organizations that continue to serve as houses of the movement such as the National Coalition Against Domestic Violence. At the same time, Tillie organized in her home community on the Rosebud reservation, serving as a founding mother to the White Buffalo Calf Woman Society. For the next three decades, Tillie’s leadership continued to indigenize federal legislation—the Violence Against Women Act, the Family Violence Protection and Services Act, Tribal Law and Order Act, and much more. In 1995, after the passage of VAWA, Tillie met with the Department of Justice to plant a stake for VAWA to include Indian tribes. In 2000, Tillie helped shape the new VAWA tribal coalition program. Tillie’s spirituality was constant, and in 2003, Tillie led a Wiping of the Tears ceremony at the Senate building to launch the struggle for the VAWA 2005 Safety for Indian Women Act. In 2011, as part of the NCAI Task Force, Tillie met with United Nations Special Rapporteur Rashida Manjoo as a pathway to the VAWA 2013 victory, restoring jurisdiction over non-Indians to Indian tribes. This same year, Tillie again provided leadership to create the National Indigenous Women’s Resource Center.

“NIWRC will forever hold Tillie in our hearts and honor her dedication to the safety of Native women and the sovereignty of Indian nations. We say thank you to her daughter, Connie, grandchildren, and her entire family, for sharing your beloved ina and unci with the movement for almost four decades.” —Lucy Simpson, NIWRC Executive Director.

On October 1st, the movement helped launch Domestic Violence Awareness Month by celebrating Tillie Black Bear, Wa Wokiye Win (Woman Who Helps Everyone) for her contributions as a founding grandmother, Unci, of the movement to end violence against women in the U.S. and across tribal nations. Speakers included spiritual leader Chief Arvol Looking Horse, Tillie’s grandson, Taylor Brushbreaker, and voices in the movement.