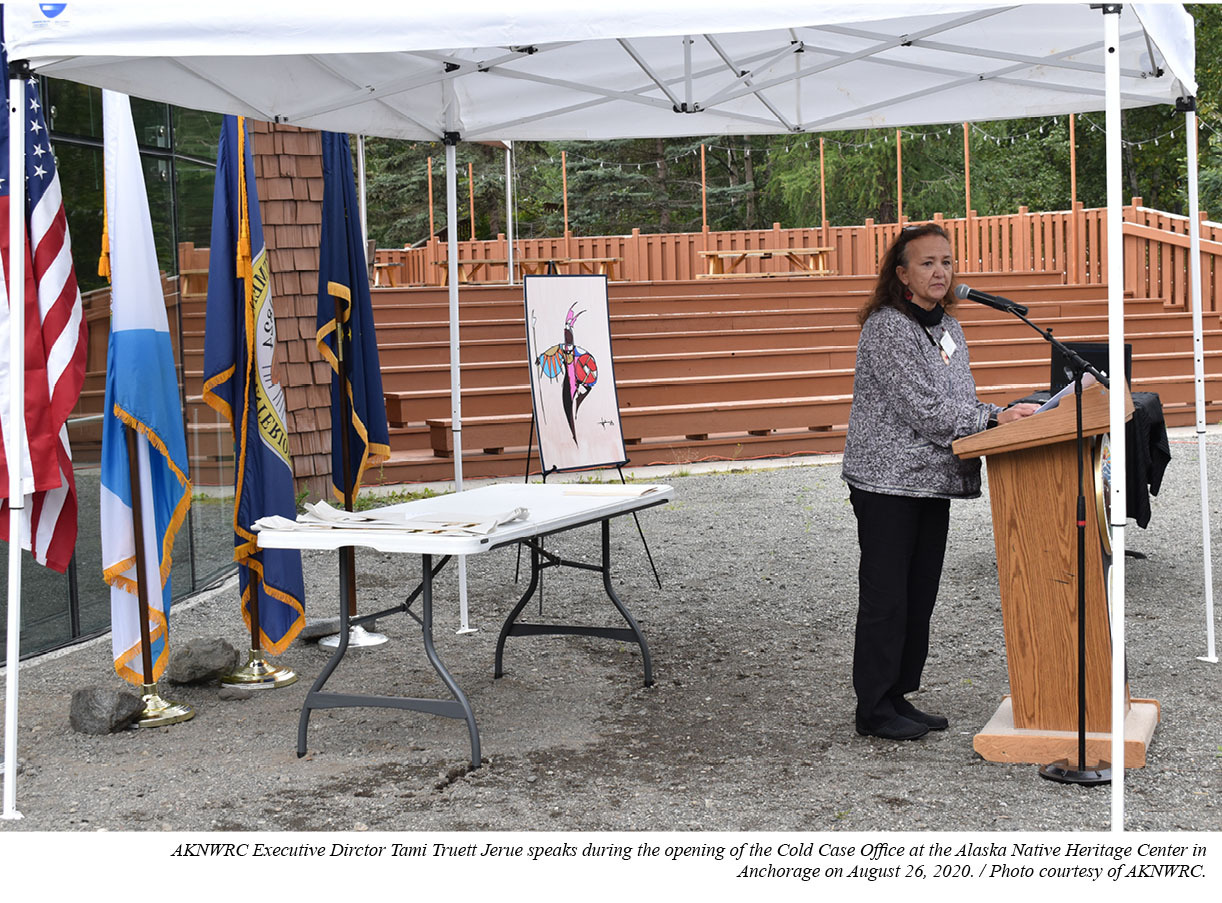 On August 26, 2020, the Department of Justice held an official opening of a Cold Case office in Anchorage, Alaska. This is one of seven offices, spread throughout the United States, dedicated to working on long standing cold cases involving the homicide of Indigenous women over the last several decades. Tami Truett Jerue, Executive Director of the Alaska Native Women’s Resource Center (AKNWRC), was in attendance to both applaud the efforts of the federal government and send the message that the effort was long overdue.

Truett Jerue, an enrolled citizen of the Anvik Tribe, Deg it’ tan Athabascan from interior Alaska is the mother to four children, the grandmother of five. In her opening remarks she stated, “We have waited a very long time for this.”

Sadly, Alaska is a violent state. While violence against Native women occurs at higher rates than any other population in the United States, it is at its worst in Alaska. A full 50 percent of Alaska Native women will experience physical or sexual violence in their lifetime. As for missing persons, Alaska has the highest number of any state in the union and these are not per capita numbers.

Violence is nothing new for Indigenous people. Violence, rape, murder and trafficking have been a significant part of the Native experience since first contact with the European and Russian explorers and traders.

There are far too many Alaska Native women and girls that have experienced victimization just because they are Indigenous women. Too many relatives have suffered abuse and death because the government has failed in their legal trust and moral responsibility to assist Indigenous nations in safeguarding the lives of our women and children. Alaska Tribes and Tribal communities have few options when seeking help such as safe shelter, sexual assault services, law enforcement, medical and mental health services, or any type of help dealing with the aftermath of victimization. The result of this lack of fundamental services is far too often death or missing.

“Our families have no closure when our mothers, daughters and aunties die unexpectedly and unnaturally. The manner of death, while sometimes considered “suspicious,” often with visible injuries, results with the death classified as accidental, suicidal, or undetermined,” said Truett Jerue. “Because these causes are not criminal, there is no investigation and there is no justice. No one is held accountable, and there is no closure for the families left behind.” 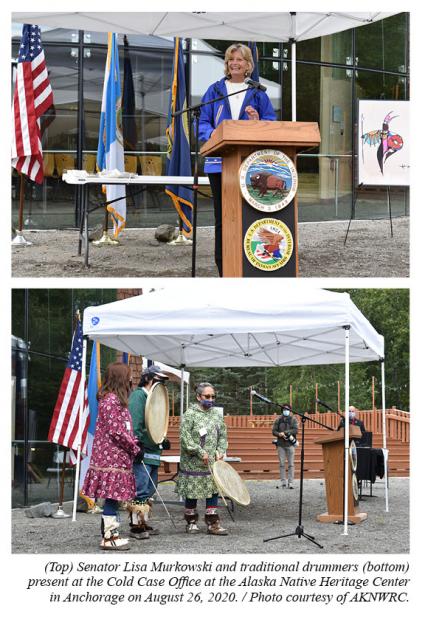 Occasionally, there is a resolution, but it often takes years. The case of Sophie Sergie is an example of one such case that took 25 years to solve when DNA was used to identify the killer. Currently, there is a missing Alaska Native woman named Florence Okpealuk from Nome who has been missing since August 31, 2020. The search continues with no new updates.

Unfortunately, Florence’s case is an exception, not the rule. Here in Alaska there are hundreds of unsolved murder and missing cases involving Alaska Native women and girls. Each day the numbers continue to grow and escalated in 2020 due to COVID-19 effects on transportation, safety and law enforcement response were put into place.

It is our hope with the opening of the Anchorage Cold Case Office that more attention and resources will be given to the many missing and murdered Alaska Native women. This is one more step in the right direction in addressing this longstanding problem. We want to thank the Department of Justice for taking this big step forward in this battle for our lives. At the same time, we will continue to sound the alarm. Investigations into all of the murder and missing cases in Alaska requires more than simply reassigning one FBI agent to the task.

There must be a full cross jurisdiction effort with collaboration and uniformed protocols for all of the law enforcement agencies currently operating in Alaska, from the FBI to the Alaska State Troopers to the various local and Tribal officers. The fact that there are no protocols that assist first responders with communication and coordination only leads to failure in the investigation of missing and murdered women.

The AKNWRC urges the Cold Case Office to coordinate with the newly formed Missing and Murdered Indigenous People Task Force. What is needed is reliable and consistent information about how and when to report that someone has gone missing so that search and investigation can begin immediately. There must be a reliable and consistent way to get information to and from the family and community. The lack of information only increases the stress, anxiety and grief during a very traumatic situation. It is family and friends that hold the most information that can assist with any investigation. It is their loved ones that have gone missing or have been murdered yet they are often the last to be interviewed or sought for information.

The law enforcement agencies across the state should find or develop ways to work together, rather than to pass the buck to one another. Nearly 40 percent of the rural Alaska Native communities’ lack any law enforcement or Western style court systems. This makes the need for cooperation the greatest and collaboration should be the first course of action, not the last.

Today we are at a historic crossroads with a unique opportunity to stop the devastation of violence. In Deg it’ tan Athabascan, as with other language groups in Alaska, we had no words or description for violence within a family home. We had traditional forms of justice that kept our community in check and women valued as the life giver of the family. We had community justice, which we are now returning to. We ask the Department of Justice and the new Cold Case Office to recognize and respect our experience, culture, and our efforts to make our homes safe again. We ask that all of the law enforcement agencies become involved with the solution to this crisis of violence.