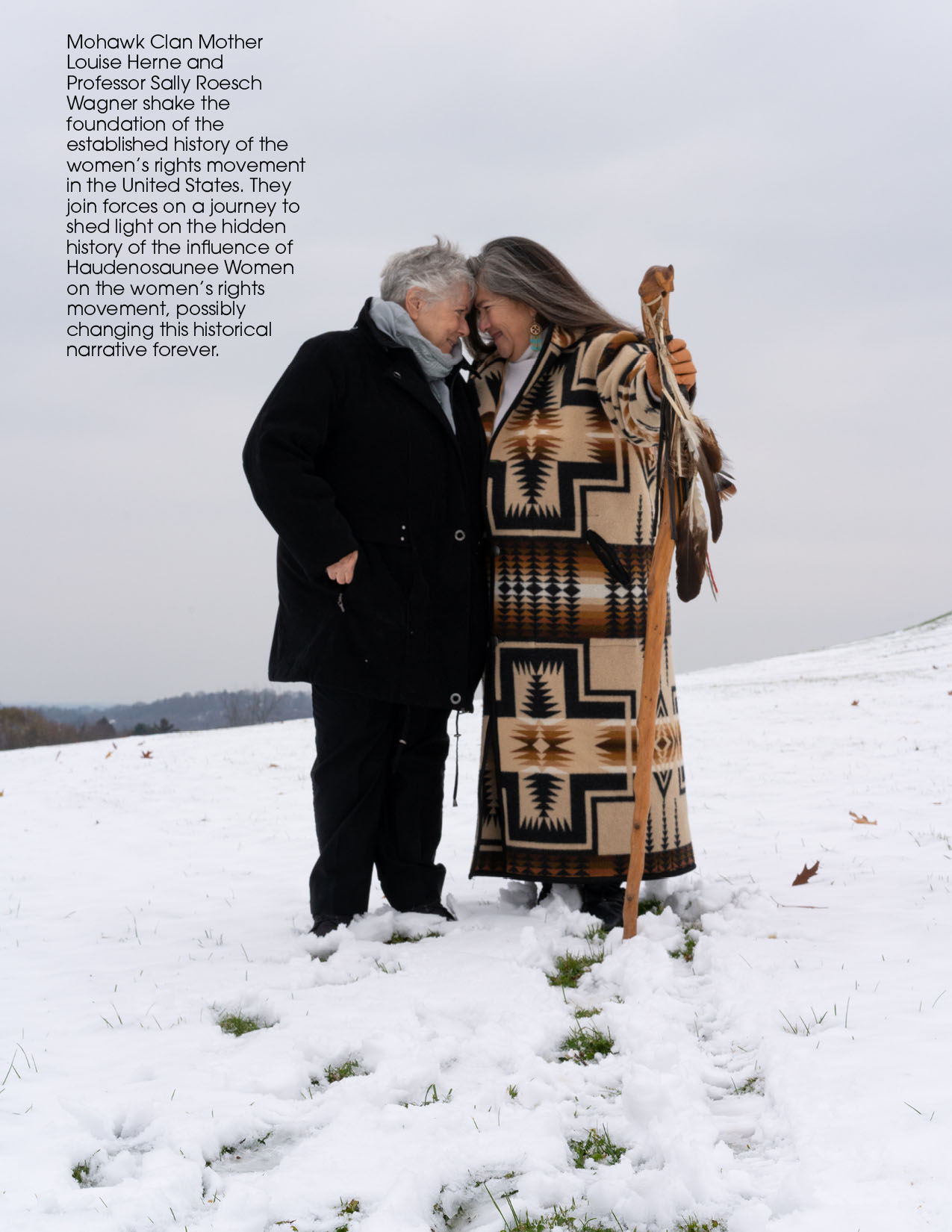 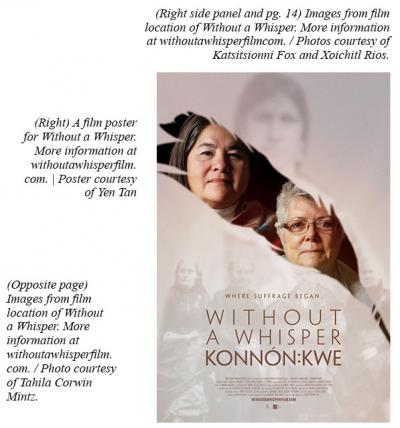 WITHOUT A WHISPER - KONNÓN:KWE is a journey of two unlikely friends, Professor Sally Roesch Wagner and Mohawk Clan Mother Louise Wakerahkatsteh Herne as they uncover the hidden history of how Indigenous women influenced the suffragettes in their fight for freedom and equality in the early 1800s.

During this period in history, Euro-American women were “dead in the law” losing all their rights and property to their husbands once they became married. They did not have a voice in politics, the economy or religion. At a time when non-Native women lacked even the most basic rights, they witnessed their Native counterparts, the Haudenosaunee (Iroquois) living in a matrilineal society in their traditional homeland of what is now New York State. Haudenosaunee women had inherent authority in all aspects of their life: politically, economically, socially and spiritually.

Louise Wakerakatste Herne is Mohawk Clan Mother from the Mohawk Nation territory, located in upstate New York. She is fluent in her language, a spiritual practitioner, and political leader. She is well known for her work empowering Native women and youth. Dr. Sally Roesch Wagner, is one of the most important scholars of Women’s Studies in the United States. In her research, Sally made the surprising discovery of the Haudenosaunee women’s influence on the early feminists. A fact that was completely unknown. When Sally and Louise met, there was an immediate kinship and connection, echoing the relationship of feminists and Haudenosaunee women in the not so distant past. Since her discovery, Sally has fought many years for the re-writing of history to acknowledge the influence of the Haudenosaunee women on the women’s rights movement. Louise has supported her in her quest, as she herself works to reignite the power of Haudenosaunee women in her community.

Haudenosaunee society is based on equality and balance amongst men and women rooted in their culture and worldview. Clan Mothers were responsible for selecting Chiefs and had the final say if men could go to war. Our protagonists give voice to the women of long ago, guiding us down a different path of women’s rights history that is unknown. Suffragettes, including Lucretia Mott, Elizabeth Cady Stanton and Matilda Joselyn Gage were astounded by the freedom and authority Native women possessed. Matilda Joselyn Gage remarked about the Haudenosaunee “Never was justice more perfect, never civilization higher than under the Matriarchate.” These women held the first women’s convention in the United States in Seneca Falls, New York in 1848 on the ancestral land of the Haudenosaunee. The struggle of these early American Feminists would take more than 70 years to win the right to vote in 1920. However, the influence of Haudenosaunee women on the early suffragists was side-stepped by the western male writers of history.

Ironically, during this time that Non-Native women gained strength and new-found freedoms, the roles and strength of Native Women began to deteriorate. Government enforced assimilation policies, land loss, and the influence of foreign religions caused the traditional Haudenosaunee way of life to unravel and women’s power declined.

Creation of a Partnership

When a publisher approached Sally Roesch Wagner to write an anthology on women’s suffrage, Sally agreed, granted she can write a more inclusive history that includes the influence of the Haudenosaunee. This collaboration is unprecedented, and the partnership gives a voice to an untold historic perspective and recollection. Sally Roesch Wagner is joined by Gloria Steinem and Louise Herne in New York City for the launch of this controversial book. In Louise’s community, Louise continues to empower Haudenosaunee women to reclaim their power and strength. The realization of a history that includes Indigenous women’s voices is upon us. The Haudenosaunee contribution to the women’s rights movement could be common knowledge for this generation.

“Sally Roesch Wagner joined Tillie Black Bear and other Native women in the ‘90s who were organizing to end violence against Native women. Together they did anti-racism work across South and North Dakota still remembered today. Sally is the author of several books, including “Sisters in Spirit,” many of us read in the early days of our movement for safety.” —Carmen O’Leary, Board Member, NIWRC