For over two decades, tribal advocates for Native women and tribal leaders have repeatedly raised that Congress must act to save the lives of Native women and stop the violence. Violence happens across all populations, but violence against American Indian women is different and the reasons why are not surprising. From the beginnings of the United States, the safety of Native women as citizens of Indian nations was vulnerable.

While their respective tribal nations based on teachings of respect held women as sacred, the law of the United States offered no protection. The culmination of this legacy is the current legal infrastructure by which the federal and many state governments continue to operate. Change is happening, but the toll in human life demands that Congress act in accordance to the human crisis confronting Native women and girls.

“We call upon Congress to act to address this crisis, to make the necessary changes, for Indian tribes to have the authority and resources to protect Native women.”—Elizabeth Carr, Senior Native Affairs Advisor, NIWRC

The federal government, specifically the Department of Justice, has documented this crisis and the need for changes being called for by tribal leaders. Three specific Congressional findings separate Native women from all other women in the United States and must be continually highlighted by the movement. Three injustices lived by American Indian and Alaska Native women include: higher rates of violence; violence committed more commonly by non-Native perpetrators; and as victims of violence they are less likely to receive the services needed. These three facts reflect the inequalities imposed upon and lived by Native women from birth to death.

“To change our reality, we must understand it. Not case by case, but over lifetimes and generations. The pattern of violence over hundreds of years is what screams to be recognized and calls for change.”—Lucy Simpson, Executive Director, NIWRC

These injustices are well documented by the federal government and reflected by the following data:

More than 4 in 5 American Indian and Alaska Native (AI/AN) women (84.3 percent) have experienced violence in their lifetime.

More than half of AI/AN women (56.1 percent) have experienced sexual violence in their lifetime.

More than half of AI/AN women (55.5 percent) have experienced physical violence by intimate partners in their lifetime.

Almost half of AI/AN women (48.8 percent) have been stalked in their lifetime.1

In 2019, Congressional champions have responded to this crisis with the introduction of the following legislation to address barriers raised by Indian tribes to the safety of Indian women. 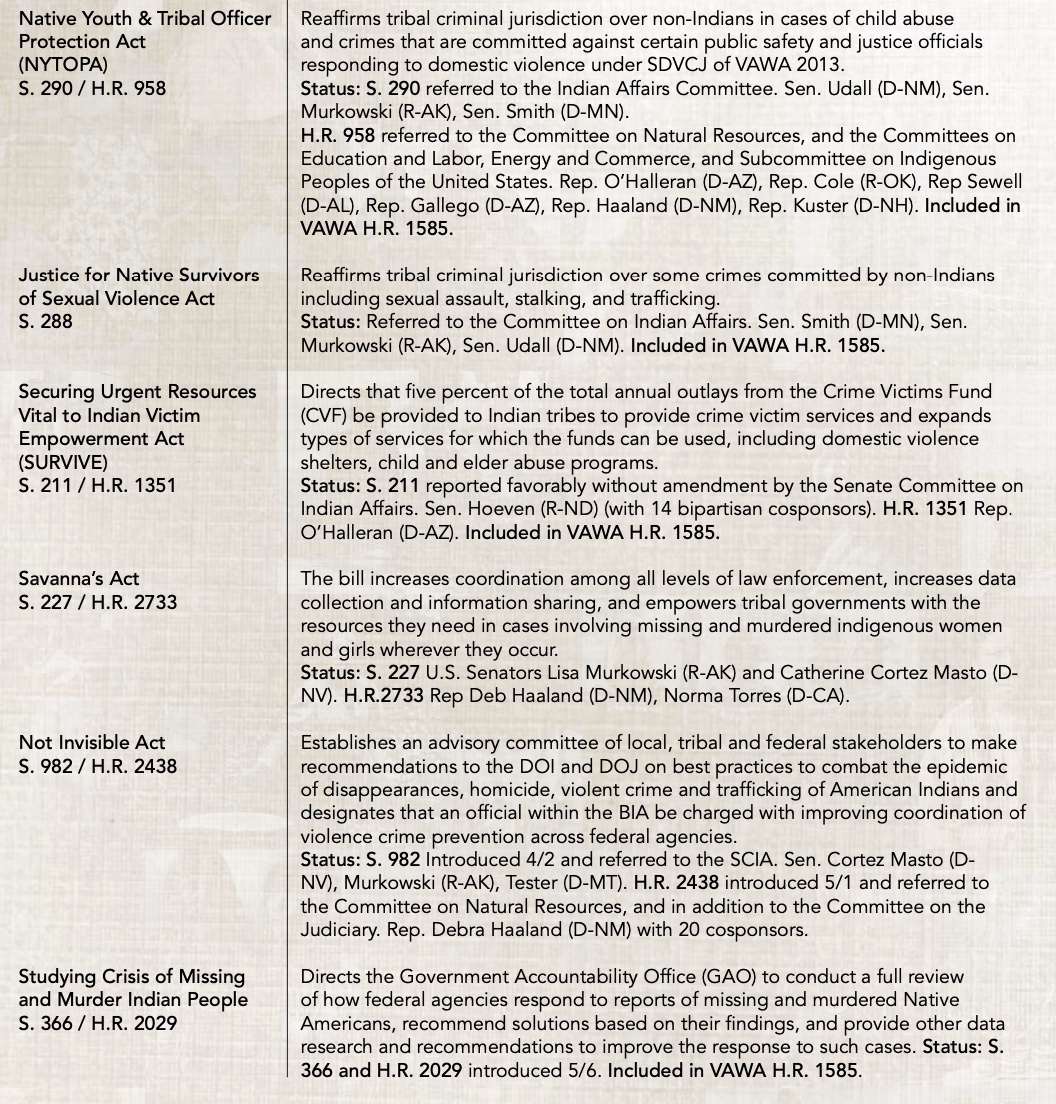