In the face of thousands of abductions and murders of Native women, why is a voluntary database acceptable? The government can do better.

There are many stories of Alaska Native women and girls that have faced victimization just because they are Indigenous women. Too many of our relatives have suffered abuse and death because of a government system that fails in their legal trust and moral responsibility to assist Indigenous nations in safeguarding the lives of our women and children. Simply stated for Alaska Native women, there is little, if any, help available. The safe shelter, law enforcement, medical services, and other types of help dealing with the trauma and crisis after being victimized for most do not exist. The services needed to help Alaska Native women from going missing or being murdered do not exist. Yes, we want to know how many women are missing and have been killed. And, at the same time, we must address the lack of services to prevent future disappearances and murders.

We have no closure with many of our women who die unexpectedly and unnaturally. The manner of death, while often considered “suspicious” and often with visible injuries, are classified as accidental, suicidal, or undetermined. In the village of Klawock, police suspected “foul play” in the unnatural death of Francile Ella Turpin (37) on January 14, 2018, a year later, there is no resolution.1 Why is it that our women and their families do not receive the closure regarding the cause of death that the general population takes for granted?

40 percent of our communities have no law enforcement, or any 911 services to speak of, so who do they call? The first responders are often volunteer medics whose first inclination is to address the injury. The possibility that there could be a crime committed is not even contemplated, and the scene can easily be contaminated before a semi-qualified individual can preserve the scene. Other potential first responders are tribal leaders and our volunteer women advocates who go to attempt to preserve any crime. Joel Jackson, President of the Organized Village of Kake, has had to respond to the crime scenes, including murders because he is the closest that the village of 800 plus has to a police officer. President Jackson is a former policeman.

How do we track the missing and murdered? We don’t. NamUs is about the only database that tracks MMIW and does contain valuable information, but it is a volunteer system and it does not currently talk to the  FBI CJIS’s Missing persons file, which is the system law enforcement is most familiar with. Anyone can have access to NamUs--literally. All they have to do is set up an account and enter the information they want to enter about a missing person. The NamUs staff take that information and confirm with Law Enforcement before it can go out publicly. There are less missing Native persons in NamUs than there are in FBI CJIS’s missing persons file, likely because law enforcement doesn’t use it in the same way. 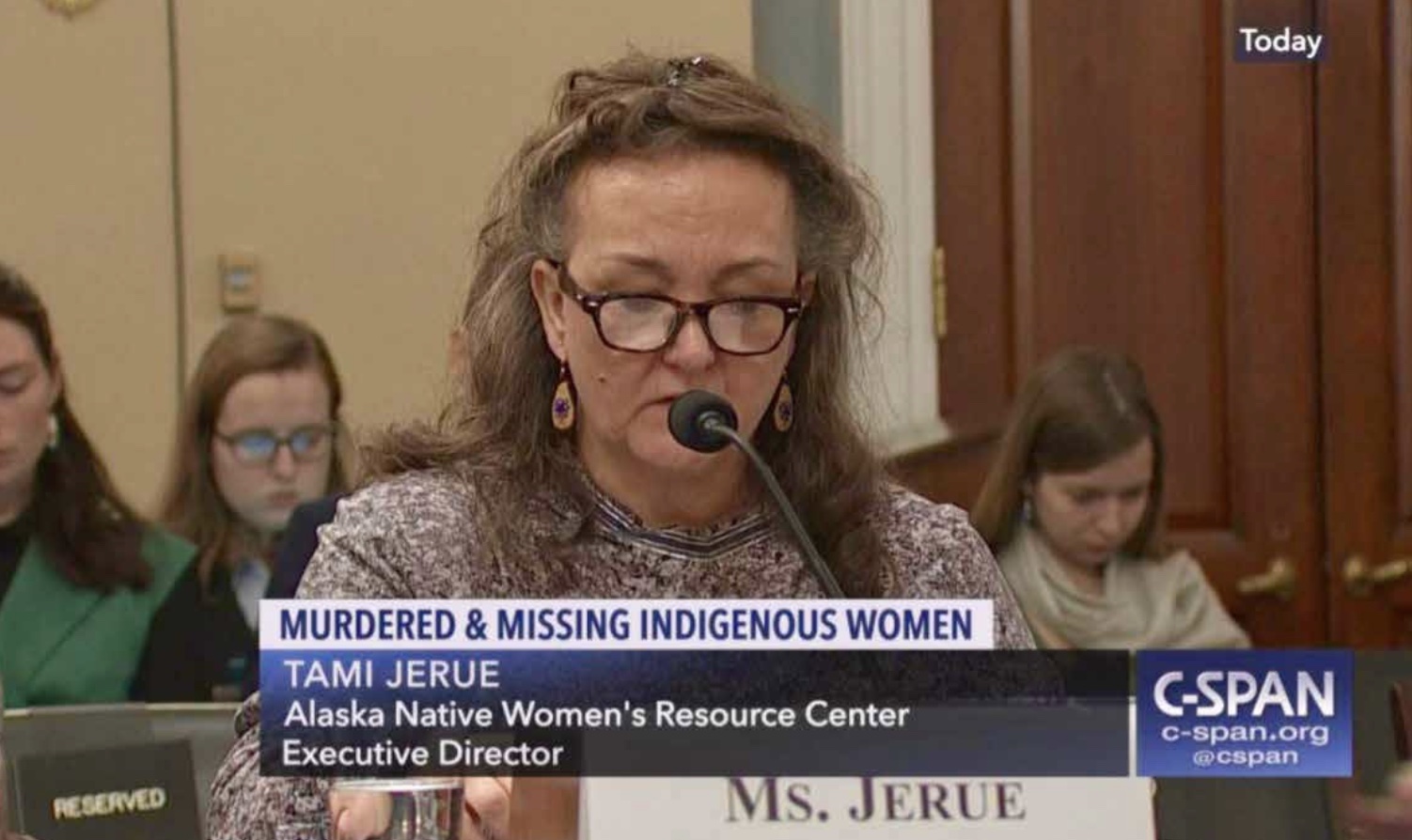 NamUs is completely voluntary and was originally set up to try to match remains found with people who were missing. FBI CJIS’s database is also voluntary except for the entry of missing persons under age 18 which is mandatory, and then some states have mandatory missing person reports to CJIS by their state law, but it is way less than half. A tribe, or any person, have access to initiate cases in NamUs, however, the net effect of going that route is unknown.

In addition, there is a component in which genetic material is requested in NamUs. While this request is voluntary, it makes most Native Americans shy away from the process. Anyone can provide a family reference sample, DNA collection, to NamUs, a law enforcement officer, or agent of a criminal justice agency for testing at the University of North Texas Health Science Center, Center for Human Identification, where NamUs is housed. Upon completion of the testing, the DNA profile is sent directly from the lab and uploaded to CODIS; no DNA samples are housed in the NamUs system. While NamUs says that the family reference sample can only be run against the unidentified decedent database and cannot ever be run against the convicted offenders or the forensic profiles. Apparently, at any time a family would like their DNA removed from CODIS they can send a written request to NamUs/UNT and the lab will request that the profile be removed from CODIS. Again, while this is the current policy, we do not have the assurances that our DNA won’t be used in ways not approved.

According to the National Institute of Justice, the NamUs team was in Alaska in October 2018 to do outreach with several law enforcement agencies, the Alaska medical examiner, Department of Public Safety, and others. During those discussions it was raised that there is a backlog in digitizing 1,200 missing persons cases. Apparently, there is only one person currently working the backlog (Search and Rescue Program Coordinator, Missing Persons Clearinghouse Manager, Alaska State Troopers). That is not to say those cases are not being worked, just that they are not digitized thus unknown how many of those 1200 cases are American Indian and Alaska Natives.

As for missing persons, Alaska has the highest number of any state in the union and these are not per capita numbers. As of January 2019, out of the 347 missing Alaska Native and American people’s in the NamUs system 74 of those were from Alaska—the most of any state. Overall, 92 % have been missing for less than a year, and the majority of cases are male—about 1/3 to 2/3 respectfully. Why does it take so long to work our cases compared to other populations? And where are all the cases of women who are missing from their families and communities?

As for the murder epidemic, the Violence Policy Center reports that Alaska is ranked first among states with the highest homicide rates of women by men and is the most violent state, with Anchorage as the most violent city within the Union. The Seattle-based Urban Indian Health Institute reports that Alaska is among the top ten states with the highest number of missing and murdered Native Americans and Alaska Natives with 52 active cases.

While there is tremendous diversity among all tribes, it is worth noting that many of the 229 tribes in Alaska experience extreme conditions that differ significantly from tribes outside Alaska. Most of the Alaska Native villages are located in remote areas that are often inaccessible by road and have no local law enforcement presence. The Tribal Law and Order Commission found that “Alaska Department of Public Safety (ADPS) officers have primary responsibility for law enforcement in rural Alaska, but ADPS provides for only 1.0-1.4 field officers per million acres.”2 Without a strong law enforcement presence, crime regularly occurs with impunity. Victims live in small, close-knit communities where access to basic criminal justice services is non-existent and health care is often provided remotely through telemedicine technology. Providing comprehensive services and justice to victims in these circumstances presents unique challenges. In many of these communities, tribal members receive services in informal ways. Domestic violence victims, for example, may be offered shelter in a home that is a known “safe house” in the village. Furthermore, Alaska tribal governments are unique among Indigenous American tribes in their lack of access to the same type of government revenues available to nearly every other sovereign entity in the country.

For years tribal leaders have raised concerns at the annual VAWA mandated consultation the inadequate response to cases of missing or murdered Native women. DOJ summarized tribal leader testimony on this issue in 2016:

“At the 2016 consultation, many tribal leaders testified that the disappearance and deaths of American Indian and Alaska Native (AI/AN) women are not taken seriously enough, and that increased awareness and a stronger law enforcement response are critical to saving Native women’s lives. They noted that missing AI/AN women may have been trafficked, and they also provided examples of abusers who murdered their partners after engaging in a pattern of escalating violence for which they were not held accountable. Tribal leaders also raised concerns that cases involving Native victims are often mislabeled as runaways or suicides, and that cold cases are not given sufficient priority. Recommendations included the creation of a national working group to address these issues and an alert system to help locate victims soon after they disappear, as well as the development of an Indian country-wide protocol for missing Native women, children, and men.” 3

We call on the United states for a jurisdictional fix to the Alaska Native Indian country issue, meaningful consultation, and consistent tribal justice funding. The Savanna’s Act, the Not Invisible Act, and the Studying the Missing and Murdered Indian Crisis Act introduced this year are beginnings. And, while these are steps forward, they are not enough. Alaska Native women need services to prevent these crimes. And, Alaska Native Villages must be included in any legislative response to address the crisis of MMIW in Alaska.

There is a unique opportunity to recognize these issues and make corrections to the laws. In Deg it tan Athabascan, as with other language groups in Alaska, we had no words or description for violence within a family home. We had traditional forms of justice that kept our community in check and women valued as the life giver of the family. We had community justice, which we are now returning to.

The federally funded Alaska Native Women’s Resource Center through the Office on Violence Against Women, U.S. Department of Justice and the Family Violence Prevention and Services Office, U.S. Department of Health and Human Services, is providing meaningful village engagement sessions with Alaska Native tribes. Through this engagement we help to identify the resources within each tribe to address violence against women in their own voices, language and teachings. With each engagement session we partner with the tribe towards restoring balance in their community.

The story of Sophie Sergie recently in the news finally gave closure to her family. 4 Sophie traveled to Fairbanks from her village in western Alaska in 1993, to visit her friend at the University of Alaska dormitory. She left the room to go outside and smoke a cigarette and never returned. There was a search for her, and she was found raped and murdered in a dormitory bathroom. For 25 years, there was no justice in her case. Then a DNA link was made to man living in Maine who was a student who at the University at the time of the murder. On February 15, 2019, after 25 years an arrest was made. The arrest is a step forward and we believe other cases must also be solved.

To address the crisis of missing and murdered Alaska Native women and girls requires restoring and enhancing local, tribal governmental capacity to respond to violence against women to provide for greater local control, safety, and accountability. These crimes are far removed from the reach of the state or federal governments. From this local approach we create the possibilities of safer communities and a pathway for long lasting justice. We have the possibilities of preventing Alaska Native women from going missing or being murdered.

Tami Truett Jerue, Executive Director of the Alaska Native Women’s Resource Center, and a citizen of the Anvik Tribe, Deg it’ tan Athabascan presented at a hearing of the Resources Subcommittee for Indigenous Peoples of the United States,

“Unmasking the Hidden Crisis of Murdered and Missing Indigenous Women (MMIW): Exploring Solutions to End the Cycle of Violence,” held on March 14, 2019. Read her testimony at https://naturalresources.house.gov/imo/media/doc/Written%20Testimony_Ta….

2. A Roadmap for Making Native America Safer: Report to the President and Congress of the United States (November 2013), available at http://www.aisc.ucla.edu/iloc/report/.

3. U.S. Department of Justice, Office on Violence Against Women, “2017 Update on the Status of Tribal Consultation Recommendations,” (2017).