As of the deadline to send this article to print for the June 2019 issue of Restoration, we have yet to receive word on any decision in two critical Supreme Court cases: Carpenter v. Murphy, No. 17-1107, and Gamble v. United States, No. 17-646. Both will have huge implications for Tribal Nations who seek to protect their women and children from domestic violence and abuse on tribal lands.

Murphy arises from a tribal citizen’s conviction of murder in Oklahoma State court. After exhausting his appeals, he filed a habeas corpus petition in federal district court asserting that because the crime occurred within the Tribe’s reservation boundaries, and because he is Indian, the state court was without jurisdiction. The federal district court denied his petition, holding that Oklahoma possessed jurisdiction because the Muskogee (Creek) Nation (MCN) reservation was disestablished. On appeal, the Tenth Circuit Court of Appeals utilized the three-factor Solem reservation disestablishment analysis to conclude that the reservation had not been disestablished and granted Mr. Murphy’s petition. The State of Oklahoma appealed to the U.S. Supreme Court.

Oklahoma has asked the Supreme Court to reverse the Tenth Circuit’s decision. Specifically, Oklahoma posits that because the MCN reservation no longer remains a “reservation,” lands within the reservation boundaries do not constitute “Indian country” under 18 U.S.C. § 1151(a).

The NIWRC, in conjunction with many Tribal Nations and tribal coalitions, filed an amicus brief, noting the implications the Court’s decision could have for Native women. In re-authorizing the Violence Against Women Act in 2013 (“VAWA 2013”), Congress tethered its restoration of tribal criminal jurisdiction to lands that constitute “Indian country.” VAWA, Pub. L. No. 113-4, title IX, § 904, 127 Stat. 120 (March 7, 2013) (codified at 25 U.S.C. § 1304(a)(3)). Thus, because the lands within a Tribal Nation’s borders—its “reservation”—constitute “Indian country” under § 1151, a judicial decision disestablishing a Tribal Nation’s reservation would effectively preclude that Nation from fully implementing VAWA’s restored tribal jurisdiction. For instance, if this Court were to declare the MCN’s reservation “disestablished,” the MCN’s ability to prosecute a non-Indian engaged in an act of domestic violence or dating violence within its territorial jurisdiction would be severely truncated. 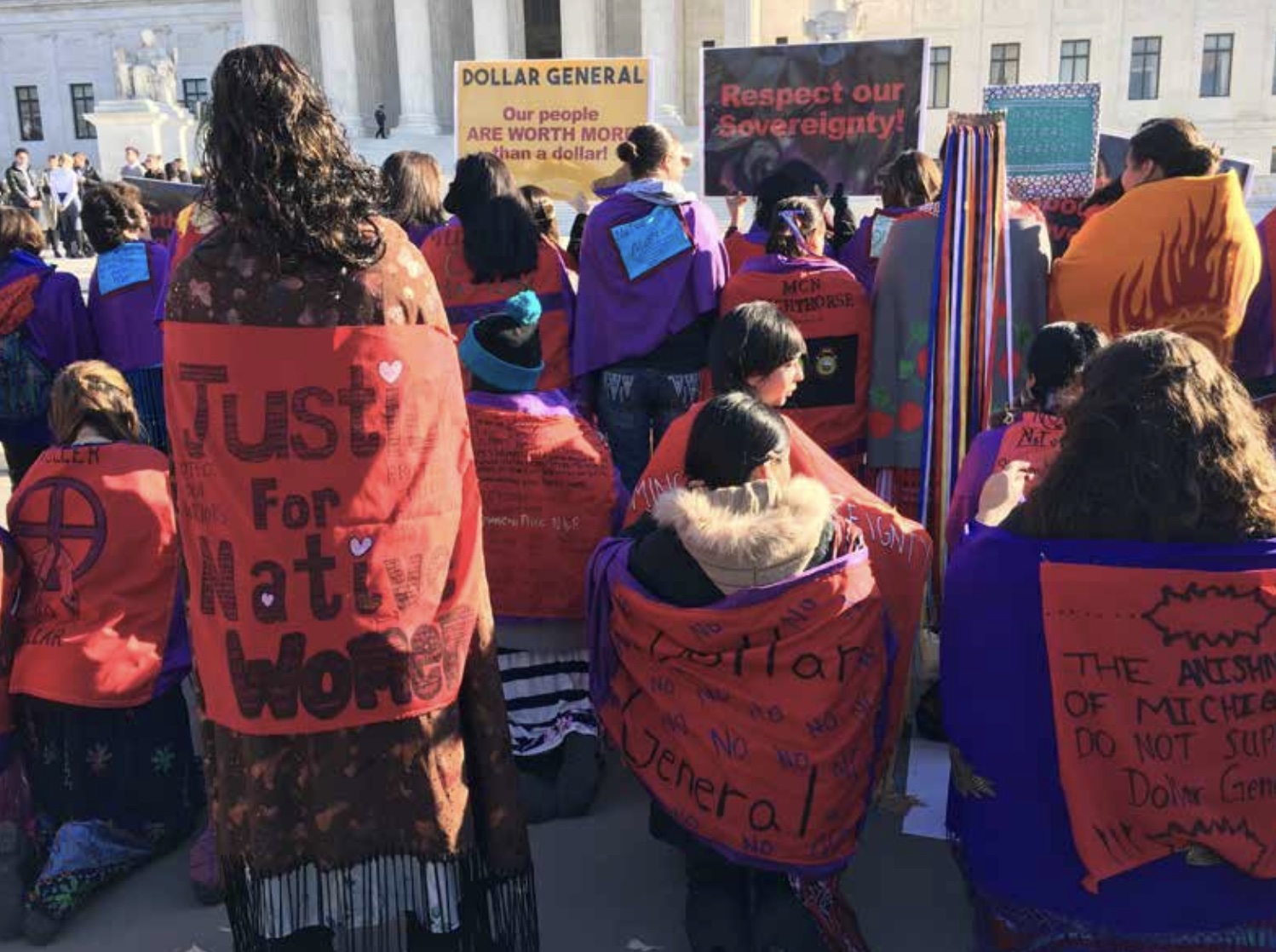 During oral argument in November 2018, Lisa Blatt, on behalf of the State of Oklahoma, argued vigorously that in creating the State of Oklahoma, Congress intended to obliterate every aspect of MCN’s sovereignty, and consequently, the MCN is without a reservation today. Justice Breyer expressed skepticism regarding Ms. Blatt’s position that Congress completely terminated tribal authority, commenting at some length about how the Tribe continually maintained a legislative body.

According to Mr. Kneedler, who argued on behalf of the United States Department of Justice, this case implicates not just the MCN’s reservation, but all of eastern Oklahoma, and affirming the Tenth Circuit would require increased federal resources of all crimes involving an Indian and call into question “a number of convictions” (which he later characterized as “several thousand” convictions). Moreover, he asserted, Indians would not be subject to state taxation in the entire area of eastern Oklahoma.

Arguing on behalf of the MCN, Riyaz Kanji emphasized that significant disruption would result not from affirming the Tenth Circuit, but from reversal. He stressed that other large metropolitan areas, such as Tacoma, Washington, exist within reservation boundaries without the dire consequences that Oklahoma suggests. If the Court affirms, he said, the State would retain significant authority over non-Indians within the reservation, over non-Indian fee lands, and that existing cooperative agreements would continue allocating tribal, state, and local governmental activities within the reservation boundaries.

It has been six months since the oral argument, and with Justice Gorsuch having recused himself, the delay in issuing a decision may indicate the Court is struggling to reach a decision that does not result in a 4-4 tie. Of course, a tie in this instance would result in a victory for the MCN, as well as Native women and children, since the Tenth Circuit Court of Appeals ruled in the Nation’s favor. We remain hopeful that the Court will reach the right outcome and uphold the existence of the MCN reservation.

In Gamble, the Supreme Court is considering whether to abandon the dual-sovereignty view of the Double Jeopardy Clause, by which separate sovereigns—that is, the federal government, States, and Tribes—are not precluded from bringing separate, successive prosecutions for the same criminal act. Although the case specifically concerns a subsequent federal prosecution following a state one, a holding for Gamble would almost certainly impede the application of the dual-sovereignty doctrine to subsequent tribal court prosecutions. Together, NIWRC and the National Congress of American Indians (“NCAI”) filed an amicus brief noting that:

[T]he eradication of the “separate sovereigns” doctrine would require a Tribal Nation to choose whether to prosecute a case before the U.S. Attorney has had sufficient time to perform the necessary investigation to determine whether he or she will prosecute under federal law and sentencing authority. The Tribal Nation may be forced to go ahead and prosecute, and without the “separate sovereigns” exception, such a prosecution would then preclude the more meaningful and deterrent sentencing authorized under federal jurisdiction.

And thus, until or unless tribal criminal jurisdiction—and sentencing authority—is fully and completely restored, federal prosecutions will remain an essential tool in preserving the safety of Native women and children in their own homes. See U.S. v. Wheeler, 435 U.S. 313, 331 (1978) (“Were the tribal prosecution held to bar the federal one, important federal interests in the prosecution of major offenses on Indian reservations would be frustrated.”).

Oral arguments were held in December 2018, and Justice Breyer specifically referenced the brief that NIWRC and NCAI filed, noting the concerns that a complete eradication of the dual sovereignty doctrine would effect “Indian tribes” because of the crisis of “abuse of women.” No decision has yet to be issued in this case, and NIWRC continues to monitor it closely.

Since 2015 NIWRC has filed six amicus briefs providing the perspective of safety for Native women. Over the last three years NIWRC in partnership with Pipestem Law has filed amicus briefs in the following cases: