The following concerns and recommendations are on-going national priority issues raised during past annual consultations from 2006–2018. These issues have been voted upon by Indian tribes through tribal resolutions unanimously passed during NCAI conferences by member Indian tribes (2000–2018). Regional organizations of Indian tribes have also discussed and passed resolutions in support of these recommendations. And tribal leaders and advocates have discussed and raised concerns about these barriers to protecting Native women at numerous national meetings with the administration, federal departments and agencies, and their respective Congressional delegations.

A review of the oral and written statements made by tribal leaders during prior consultations, for more than a decade, clearly document these are not new issues but complicated legal and policy barriers embedded in the layers of federal Indian law. These issues are monitored on an on-going basis by the NCAI Task Force on Violence Against Women. The Task Force recommends that federal departments address these issues and coordinate with Indian tribes regarding the implementation of the proposed recommendations to fulfill the purposes of the VAWA Safety for Indian Women Title.

“In 2005, advocates and tribal leaders came together as a national tribal movement to engage Congress to understand the life and death need to expand VAWA to support Indian tribes in responding to violence against Native women. After 10 years it was clear VAWA fell short, was inadequate, and needed to address the roots of the violence. To reach Indian tribes VAWA had to be more than a grant program. And, Indian tribes clearly were more than ‘grantees.’ The passage of the Safety for Indian Women Title was a historic stepping stone, but we have a long road ahead of us to reach safe ground.”—Carmen O’Leary, Executive Director, Native Women’s Society of the Great Plains; Board of Directors, NIWRC

The recommendations that follow include amendments to federal law, changes to administrative policies, and budget appropriations. These concerns and recommendations to address barriers raised at consultation are within the context of the government- to-government legal relationship of Indian tribes to the United States. In this context it is important for tribal leaders to provide statements regarding specific legislation to inform federal departments of such positions. This clarity based on an informed mutual understanding strengthens the tribal-federal relationship whether agreement or disagreement exist on the positions.

Many of the concerns and recommendations made by tribal leaders during past consultations are addressed in the Violence Against Women Reauthorization Act of 2019, H.R. 1585. Other recommendations are addressed in the SURVIVE Act, Justice for Native Survivors, and the Not Invisible Act. In 2018 tribal leaders raised concerns about the lack of shelter and supportive services for Indian tribes. The primary and only dedicated funding for shelter is provided under the Family Violence Reauthorization Act (FVPSA) that expired in 2015 and must be reauthorized in 2019.

The concerns and recommendations raised by Indian tribes are extensive as documented in past VAWA Consultation Reports to Congress. On the following pages are provided some of the priority issues and where available any supporting legislation. Additional information on pending legislation is also provided for VAWA on pages 24-27, MMIW on pages 28-41, FVPSA on pages 42-44, and Alaska Native villages on pages 37- 39 and 44-48. A chart of pending legislation is provided at pages 22-23. We hope this information is helpful to your preparation for and engagement during the 2019 Consultation.

Consultation Issues Regarding Reauthorization of the Violence Against Women Act, 2019

The lack of tribal jurisdiction over non-Indian offenders on Indian lands continues to be a key reason for the perpetuation of disproportionate violence against American Indian and Alaska Native women. VAWA 2013 addressed this issue for certain crimes of domestic violence, dating violence, and protection order violations for some tribes. While a step forward VAWA 2013 failed to make the changes needed for Indian tribes to fully protect Native women from abusers, rapists, traffickers, and predators. It also did not address protections for tribal children and public safety personnel in the context of domestic violence crimes. And, it failed to include 228 tribes in Alaska and Indian tribes in Maine. For those tribes that are implementing the jurisdiction provision of VAWA 2013, funding and resources are a significant problem. Indian tribes are concerned about payment of health care costs for non- Indian inmates who are sentenced in tribal courts. Recommendations to DOJ and DOI to Support the Following as provided by the VAWA Reauthorization Act (H.R. 1585):

The federal response to the crisis of Missing and Murdered Native Women is a failure and human rights violation. We cannot continue to ignore the importance of a fully resourced local, tribal response to prevent abductions and murders. It is a continuation of the history of genocide committed against the Indigenous peoples of this country. The tribal and public calls for justice have created a National Day of Awareness for Missing and Murdered Native Women and Girls recognized by Senate Resolutions (2017, 2018, and 2019), and this year a Presidential Proclamation. In combination, over 200 tribal, state, regional, and national organizations joined with the National Indigenous Women’s Resource Center in support of the Senate MMIW resolutions. The National Day of Awareness efforts reached millions of people across the United States and the world through social media platforms. And the United Nations Commission on the Status of Women joined in support of the National Day of Awareness. This public call for increased awareness is indicative of the extent of the reality that Native women go missing on a daily basis often because of the lack of tribal advocacy services and without any response by law enforcement.

American Indians and Alaska Natives experience the highest crime victimization rates in the country.1 The newly created 3% tribal set-aside from the Crime Victims Fund was celebrated across Indian tribes. This funding held the potential to change the landscape of crime victim services in tribal communities; however, disbursement by USDOJ of these funds has not met this expectation. Tribal governments have consistently asked for grantmaking processes at DOJ that respect tribal self-determination and the government-to-government relationship. Tribal leaders during the last consultation and other meetings with USDOJ and the Office for Victims of Crimes (OVC) recommended how to best use these lifesaving funds and a process for disbursement. While the timing of the FY 2018 appropriations created many challenges for administering this new funding, tribal leaders stressed the importance of demonstrating success with this inaugural round of funding. And, the NCAI Task Force offered preliminary recommendations concerning: 1) the mechanism for distributing the funds and 2) permissible uses of the funds by tribal recipients. The failure to fully disburse these lifesaving funds is unacceptable given the suffering and need for services of Indian victims.

Office on Violence Against Women (OVW) Rescission from Tribal Programs

OVW continues to apply congressionally mandated rescissions to tribal programs; for example, $3.2 million was taken from the 2016 Grants to Tribal Governments program. It is our understanding that OVW has the discretion to determine how to apply the rescission across its funding lines. Because of the unique federal trust responsibility and heightened federal obligations to, and disparities in crime and victimization for Indian tribes, future rescissions should not be applied to tribal grant programs.

Department of Interior, Bureau of Indian Affairs Disparities in Funding

Address funding disparities for tribes in Public Law 280 (PL 280) and similarly situated jurisdictions. Indian nations in PL 280 jurisdictions have been provided substantially lower amounts of support from the BIA for tribal law enforcement and tribal courts than Indian nations not subject to PL 280. Consequently, the tribes in PL 280 jurisdictions have had far less opportunity to develop their own police departments and court systems. Beginning in the 1990s, the DOJ has financially supported and provided technical assistance to Indian nations for development and enhancement of their police departments and court systems. In the past few years the DOI requested and received funding towards this end.

The escalation of sexual and domestic violence, including sex trafficking, due to extractive industries must be addressed by the DOJ, DOI, and HHS. Industries must be held accountable for the resulting violence of itinerant workforces created within tribal communities by these industries. Native women and their children should not be exposed to violence by felons, often times serial predators employed by such industries.

TLOA, Section 201, Federal Accountability. Section 201 requires U.S. Attorneys to coordinate with tribal justice officials on the use of evidence when declining to prosecute or refer a reservation crime. Sharing of this type of information is critical to keeping Indian women safe. Tribal officials need to be notified when a U.S. Attorney declines to prosecute sexual assault and domestic violence cases so that, in the case of an Indian defendant, a tribal prosecution may proceed, or in all other cases, tribes can at least notify the victim of the status of the case so that the victim may take the necessary steps for protection.
Recommendation: The Attorney General direct U.S. Attorneys to implement the law, Section 201, and be accountable for the necessary coordination and reporting duties with tribal justice officials under the TLOA. Failure to implement the law should be tied to employee performance and merit-based reviews.

TLOA, Section 304, Enhanced Tribal Sentencing Authority. Section 304 provides tribal courts the ability to sentence offenders for up to 3 years’ imprisonment for any one offense under tribal criminal law if certain protections are provided. This is a significant improvement, although this maximum sentence still falls short of the average sentence of 4 years for rape in other jurisdictions. Crucial for our purposes, tribes must have the capacity to house the offender in detention facilities that meet federal standards; otherwise, the enhanced sentencing power is meaningless. Recommendation: The DOJ work with Congress to ensure that the Bureau of Prisons Pilot Project is reauthorized.

The 2018 consultation report, which summarizes the 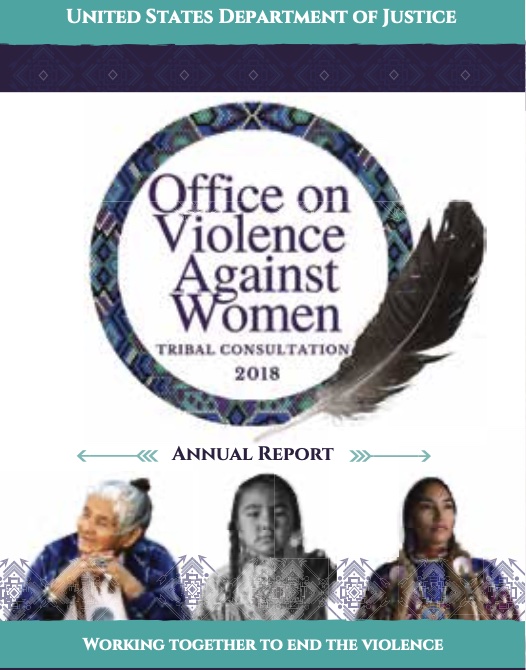 1. Rosay, R. B. (2016). Violence against American Indian and Alaska Native women and men: 2010 findings from the national intimate partner and sexual violence survey. Retrieved from https://www.ncjrs.gov/pdffiles1/nij/249736.pdf.