Missing and Murdered Indigenous Women and Girls is a serious crisis within the United States. Organizing efforts, from the grassroots to national level, have brought this issue into the public’s eye. As social justice actions continue to increase across Indian tribes and communities, lawmakers and government departments are being educated and held accountable to make the changes needed.

Governmental Responses to Calls for Justice and Change

The increased attention to the issue of MMIW is long overdue. In the first five months of 2019, three bills were introduced in the Senate with companion bills in the House, and hearings on MMIW in both the Senate and House. The changes contained in these bills are needed and will bring attention to the injustices of MMIW. They are critical first steps to fully understanding the injustices and defining solutions.

As affirmed in the 2009 Apology to Native Peoples 1, the U.S. recognized that there have been years of official depredations, ill-conceived policies, and the breaking of covenants by the Federal Government regarding Indian tribes; and apologized for the many instances of violence, maltreatment, and neglect inflicted on Native Peoples. The release in 2018 of the U.S. Commission on Civil Rights Broken Promises Report 2 also continues to affirm the need for the government to fulfill their trust responsibility with appropriate allocation of resources. The crisis of MMIW is reflective of this history and ongoing failure of the United States to protect Native women. This crisis is in part what the U.S. apologized for; the lack of resources for tribes to provide justice and victim services; and, the failure of local, state and federal responses to these crimes.

The NIWRC is working in partnership with the NCAI Task Force to educate Congress to strengthen tribal authority to respond to these crimes and ensure availability of resources to support such increased tribal responses. Efforts at all levels of tribal, state and the federal government are required to begin making the changes needed. The following state and Congressional legislative actions are highlights of such change.

National Responses: In 2019, Congress introduced three bills in both the Senate and House to recognize, study, and increase the coordination and response of law enforcement agencies to the MMIWG crisis.

The Savanna’s Act, Not Invisible Act, and Studying the Missing and Murdered Indian Crisis Act were introduced this year. The last bill providing a study by the GAO of the current government response to MMIW passed out of the House and under the Violence Against Women Reauthorization Act (HR 1585). In addition, the House 3 held a hearing on the crisis of MMIW. And, on May 5th, 2019, the White House issued a Presidential Proclamation recognizing May 5th, 2019 as the National Day of Awareness for Missing and Murder Indigenous Women.4

The U.S. Congressional effort was launched in 2017 by the delegation from Montana after the murder of Hanna Harris on the Northern Cheyenne Reservation and other abductions and killings of Native women. The 2017, Senate Resolution calling for a National Day of Awareness marked the first Congressional recognition of MMIW as a national issue. Like, every year since 2017, a resolution recognizing May 5, 2019, as a National Day of Awareness for Missing and Murder Native Women and Girls was passed in the Senate with increased support and awareness of the need to take action. 5 These proclamations and social justice actions on May 5 have resulted in the increasing response from Congress and the current administration.

Recognition and Support for Tribal Authority and Responses

The NIWRC envisions a return to Indigenous values where women are respected and recognized as sacred. The normalization of violence against Native women occurred over several hundred years as federal law and policies eroded the authority of tribal governments to protect women. It happened as the fundamental right of Native women to safety as human beings were ignored by the United States and violated. These laws and policies over time placed Native women in the status of “unprotected.” Laws shape public perception and change the cultural norm of what is unacceptable or is a crime. Many of the laws that led to this crisis continue to exist today and must be changed.

“Together, we call for prayer and healing for the families in response to this violence,” said Lucy Simpson, Executive Director of the NIWRC. “But we also demand meaningful legislative reforms that remove barriers to safety for Indian women by recognizing and strengthening the sovereign ability of all tribal nations to protect Indian women and their children.”

The National Indigenous Women’s Resource Center (NIWRC) continues our efforts to address this crisis and offers resources to raise awareness and organize community action. New resources include a new MMIW Special Collections Resource Page, MMIW digital awareness cards, and access to NIWRC weekly compilation of state and federal MMIW legislative actions. Connect online to any of the following resources provided to assist you in understanding and responding to the crisis of MMIWG.

LISTEN: “Honoring Missing and Murdered Indigenous Women to Guide our Advocacy for Change.” A recorded webinar available on NIWRC’s Resource Library at www.niwrc.org.

SIGN ON: Support May 5th as the National Day of Awareness for Missing & Murdered Indigenous Women & Girls! https://docs.google.com/forms/d/e/1FAIpQLScW6R4jHRrDDBLLWXZJhklEQti295B…

DOWNLOAD: "Tribal Community Response When a Woman is Missing: A Toolkit for Action" in NIWRC’s Resource Library. http://www.niwrc.org/resources/tribal-community-response-when-woman-mis…

SHARE: The StrongHearts Native Helpline (1-844-7NATIVE). The StrongHearts Native Helpline is a safe, confidential and free helpline for American Indians and Alaska Natives impacted by domestic violence and dating violence. Trained Native advocates offer emotional support, crisis intervention, assistance with safety planning, and a connection to local Native resources. If you or someone you know is in an abusive relationship, get free, confidential support and referrals to resources by calling 1-844-7NATIVE (762-8483), available daily from 7 a.m. to 10 p.m. CST nationwide. Callers reaching out after hours may connect with the National Domestic Violence Hotline (1−800−799−7233) by selecting option 1. More information at www.strongheartshelpline.org 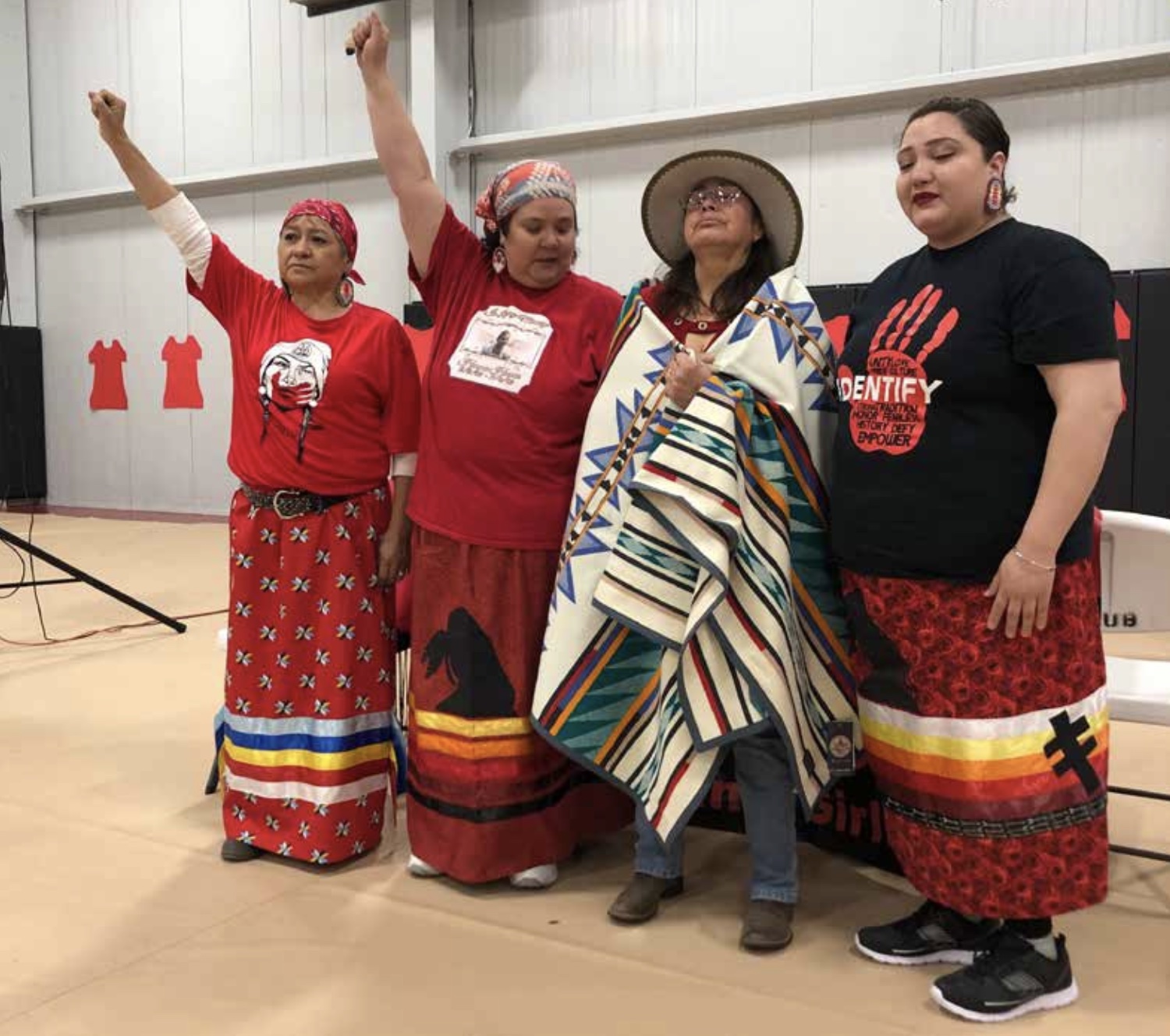 May 5, 2019, Lame Deer, Montana—As in past years, the Northern Cheyenne Indian tribe held a justice walk and program calling for national recognition and increased response to the crisis of MMIW. Pictured from left to right Northern Cheyenne President Rynalea Whiteman Pena, mother of Hanna Harris Malinda Harris Limberhand, Montana House of Representative Rae Peppers, and Hanna’s sister Rose Harris. Representative Peppers (D-Lame Deer) was the primary sponsor of Montana Bill 21, Hanna’s Act. The Act provides for a new Montana state missing persons specialist to track cases. Native Americans make up 6.7 percent of the state's population yet account for 26% of the missing persons reports. 23 of Montana’s 77 missing women, or 30 percent, are Native American. Lame Deer is where NIWRC’s main office is located and is home for many staff members.

A National Day of Awareness: Recognition of the Crisis

This year S. Res. 144 designating May 5th as a National Day of Awareness was introduced by Senator Daines and joined by Senators Tester, Hoeven, Rounds, Warren, Gardner, Crapo, Lankford, and Murkowski. As in 2017 and 2018, the Senate resolution passed by unanimous consent. These National Day of Awareness resolutions acknowledge the wrong done to missing and murdered Native women and girls and honors their lives. The resolutions are the beginnings of change, the opening of national recognition of the wrongs committed against Native women. Public honoring’s are important, they offer a path for the healing of the families and communities from the trauma of the disappearance or murder of loved one. The National Day of Awareness is also a call for justice for the changes needed to prevent future abductions, to prevent future killings, and future murders. NIWRC is honored to share the full remarks of Malinda Limberhand, the mother of Hanna Harris, during a national webinar honoring missing and murdered Native women and girls.

I want to thank all of you for joining us today.

Hanna went missing on July 4, 2013. Like in so many cases of missing Native women the system was slow to respond. We as her family, friends, and community had to conduct the search for Hanna. And this is what happens across Indian tribes when a Native women or girl goes missing or disappears. This failed response is not acceptable and must change.

As a mother of a Native woman who became one of the “Missing and Murdered” I am committed to organizing to make these changes happen. I do this for my daughter and all our missing and murdered Native women.

This is not a new problem. It is an old problem. Traditionally Native women were respected. But today we face levels of violence greater than any other group of women. This violence touches every family. Every tribe has Native women and girls who are missing or have been murdered. Since Hanna went missing and was found murdered, I have become very aware of how large a problem we face as Native women and as tribes. The Department of Justice has found that in some tribal communities, American Indian women face murder rates that are more than 10 times the national average.

Hanna was just 21 years old when she went missing. Her future was stolen, and her beautiful son denied his mother. Like Hanna murdered Native women will not live to see their dreams come true. Their tribes will not see their talents and contributions.

As a mother, nothing will replace the loss of my daughter but by organizing, by working to support the National Day of Awareness, and creating the changes needed I know it will help others. And Hanna and so many others will not be forgotten.

To end this problem, we must understand it. Many Native women go missing or are murdered by a rapist, abuser, sex trafficker, or as in the movie “Wind River” oil rig workers. These men rape, abuse, beat, and murder Native women because we are seen as “unprotected.” They know nothing will be done.

Acceptance of violence against Indian women is not new. It goes back to the Indian wars and the boarding schools when violence was used by the government. It also goes back to an old standard of not doing anything when an Indian woman was raped, beaten or murdered. It is an old problem we continue to live with today.

Bad people commit these horrible crimes against Native women, but it is the system that allows it to happen generation after generation.

This needs to stop. The system must change. And that is why I am speaking today. 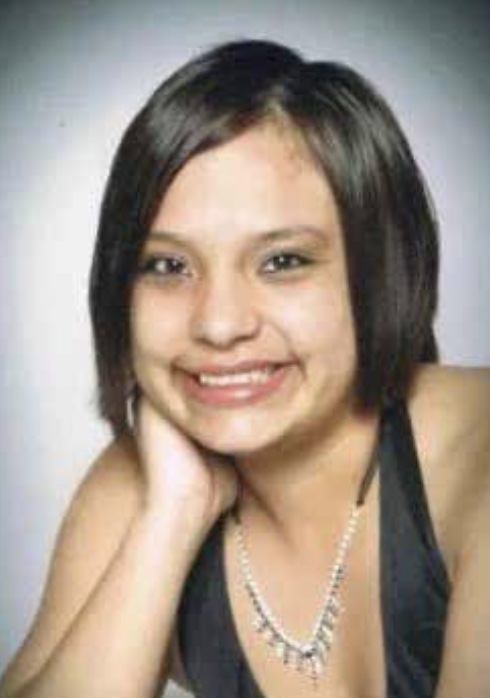 “When I reported my daughter missing, the chief of police told me, ‘She’s probably scared to come home.’ I was told I could search for Hanna myself. We did the search and found Hanna, but it was too late. Having a dedicated resource in the Department of Justice and a requirement that law enforcement takes a missing person report could have help my daughter.”