Addressing the Urgent Concerns and Recommendation of Indian Tribes in Alaska

In March, the House Judiciary Committee Subcommittee on Crime, Terrorism and Homeland Security held a hearing on the reauthorization of the Violence Against Women Act (VAWA). The following concerns and recommendations were summarized and presented in written testimony by the Alaska Native Women’s Resource Center (AKNWRC). The AKNWRC is a nonprofit organization dedicated to ending violence against women in partnership with Alaska’s 229 tribes and allied organizations. AKNWRC’s philosophy is that violence against Indigenous women is rooted in the colonization of Indigenous governments. In the context of VAWA reauthorization, the goal of the AKNWRC is to assist Alaska Indian tribes in protecting their citizens from crimes included under VAWA. We believe each tribe has the knowledge to do this.

Recommendation: Create a jurisdictional fix to address the exclusion of Alaska tribes under the current definition of Indian country and work closely with the Alaska Delegation, Alaska tribes, and the AKNWRC to ensure that provisions added will provide for the unaddressed needs of Alaska Native victims of domestic and dating violence, sexual assault, stalking, sex trafficking, and the crisis of missing and murdered Native women.

Discussion: The 2013 Tribal Law and Order Commission (TLOC) issued the Report, “A Roadmap for Making Native America Safer” and devoted a chapter to the unique issues in Alaska. 1 The Report found that the absence of an effective justice system has disproportionately harmed Alaska Native women who are continually targeted for all forms of violence. The Commission found that Alaska Native women are over-represented in the domestic violence victim population by 250%; they comprise 19% of the state population but are 47% of reported rape victims. And among other Indian Tribes, Alaska Native women suffer the highest rates of domestic and sexual violence in the country. Alaska Indian tribes lack and desperately need access to tribal and state justice services, those services are centered in a handful of Alaska’s urban areas, making them often more theoretical than real.

As mentioned, many tribes have no advocacy services, law enforcement, no 911, no state official they could conceive of raising a complaint to, given the separation of geography, language, and culture. Jurisdictional issues in Alaska create extremely dangerous conditions for our small, remote communities.

Historically, Alaska tribes have been treated differently than lower 48 tribes, confusing the fundamentals of tribal court jurisdiction resulting in recognized disparities which justified the FY17 appropriations for an Alaska Native Tribal Resource Center on Domestic Violence.2 With the passage of the Alaska Native Claims Settlement Act (ANCSA) in 1971, the only remaining reservation in the state is the Annette Island Reserve in Southeast Alaska.3 Rather than recognize sovereign tribal lands, ANCSA tasked the for-profit corporations to manage more than 40 million acres of fee land. ANCSA divided the state into 12 regional corporations and over 200 village corporations that would identify with their regional corporation. Many of these villages had corresponding tribal village governments, but with the passage of ANCSA, no meaningful land base. As a result, unlike most court systems that have defined territorial jurisdiction and personal jurisdiction. Alaska Tribal courts generally exercise jurisdiction through tribal citizenship, and not through a geographic space defined as “Indian country” because of ANCSA and in part due to a United States Supreme Court case.

As a result of the United States Supreme Court’s unfavorable decision in Alaska v. Native Village of Venetie Tribal Government, 522 U.S. 520 (1998), most of the tribes’ traditional territory is not considered “Indian country.” Without the ability to tax, without Indian gaming, and without consistent and predictable tribal justice appropriations, Alaska tribes lack the revenue typically available to other tribal governments to fund and sustain essential governmental programs. All Alaska tribes are in a similar position and must find innovative ways to raise government revenue and to leverage other resources to sustain their tribal courts and public safety programs. As a result of this resource dilemma, available grants for developing and maintaining programs are incredibly important for Alaska tribes. Whether a tribe has advocacy services or public safety personnel makes a difference if victims have support and someone to call for help.

“The strongly centralized law enforcement and justice systems of the State of Alaska . . . do not serve local and Native communities adequately, if at all. The Commission believes that devolving authority to Alaska Native communities is essential for addressing local crime. Their governments are best positioned to effectively arrest, prosecute, and punish, and they should have the authority to do so—or to work out voluntary agreements with each other, and with local governments and the State on mutually beneficial terms.”—Tribal Law and Order Commission Report, 2013

Domestic violence and sexual assault survivors in Alaska Native villages are often left without any means to seek help and justice for the crime against them because many villages lack advocacy services and law enforcement. When law enforcement does finally arrive, sometimes the evidence is stale, or the chain of custody can no longer meet applicable legal standards, and the case cannot be prosecuted. In addition, tribal victims of domestic violence crimes may need to leave their home village to seek safety for themselves and their children. In a 2018 case in a small remote interior village, a victim waited 17 days to get out of the village to safety. During this time the victim had been treated at the clinic, called law enforcement (Alaska State Troopers) located in a hub community one hour away by plane. The weather was unflyable for 3 weeks and the victim could not even get a charter plane to pick her up so she could go to a neighboring village to relatives, she could not get to a regional medical clinic for further treatment, or law enforcement could not get into the community for an investigative report. There was no safe homes or safe housing available and so she had to wait, afraid that her partner would find out that she was trying to leave.

Recent studies such as the newly released, National Institute of Justice, Research Report on the Violence Against American Indian and Native Women and Men, document the dire safety circumstances that Alaska Native villages are in as a result of their unique geographic situation. One startling statistic is that 38% of Native victims are unable to receive necessary services compared to 15% of non-Hispanic white female victims.4 Our young woman described above waited in fear for more than two weeks to get to safety. 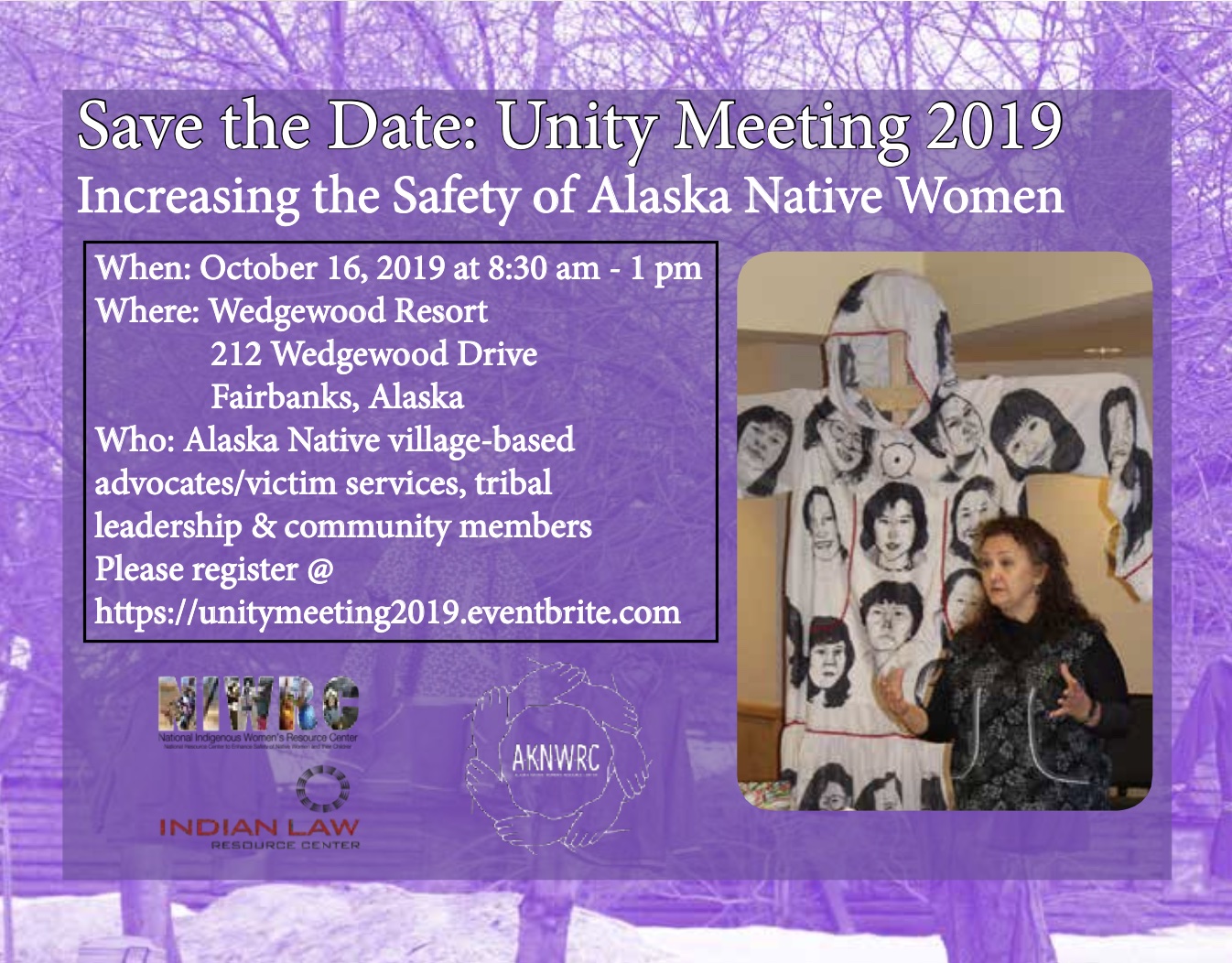 Recommendation: 1) Create a Pilot Project for Alaska so that more than just 1 of the 229 federally recognized tribes can exercise Special Domestic Violence Criminal Jurisdiction (SDVCJ) and creates a path forward. The pilot phase could be similar to the SDVCJ pilot project in VAWA 2013, requiring an application, participation in an Alaska Intertribal SDVCJ Working Group, involve a planning phase for the development of written tribal laws and ordinances, development of enforcement mechanisms, and tribal court structuring. The VAWA Reauthorization Act, HR 1585, includes this amendment.

Discussion: The repeal of section 910 of VAWA 2013 was a victory as it was a necessary step towards removing a discriminatory provision in the law that excluded all but one Alaska tribe from enhancing their response to violence against Native women in ways afforded other federally recognized tribes. Nevertheless, because of the Venetie decision, additional reforms are needed before Alaska tribes will be able to increase safety for Alaska Native women and hold all offenders accountable. This is because section 904 of VAWA 2013 limits the exercise of the special domestic violence criminal jurisdiction restored to tribes to certain crimes committed in "Indian country." Yet, at the same time, the State does not have the resources to provide the level of justice needed in tribal communities and ultimately the State is not the local, tribal authority. In the NIJ report, we learned that American Indian and Alaska Native women are 3 times more likely to experience sexual violence by an interracial perpetrator than non-Hispanic White-only females.5 Alaska Indian tribes need to be able to exercise Special Domestic Violence Criminal Jurisdiction to address these staggering statistics.

HR 1585 begins to address these jurisdictional challenges. It recognizes a tribe’s territorial jurisdiction equivalent to the corresponding village corporation’s land base and traditional territory.6 In addition, removing the requirement of “Indian country” to enforce a protection order would assist Alaska Tribal villages and provide stronger footing for enforcing protection order violations.

We need to begin a dialogue that gets at the heart of community safety issues and concerns. Government- to-government consultations must be held to develop a solution to address the jurisdictional issues found in Alaska. Until the issue of “Indian country” in Alaska

is addressed, Alaska Tribes, except Metlakatla, are largely left without inclusion in this important legislation that recognizes the inherent authority of a tribe to prosecute violent crimes against women. This situation is especially dire with the economic strain the state of Alaska is currently in. The state lacks resources to address the concerns of the village. The VAWA’s Title IX. Safety for Indian Women, Section 901. Findings state: Congress finds that (6) the unique legal relationship of the United States to Indian tribes creates a Federal trust responsibility to assist tribal governments in safeguarding the lives of Indian women.

The Violence Policy Center reports that Alaska is ranked first among states with the highest homicide rates of women by men and is the most violent state with Anchorage as the most violent city within the Union. The Seattle-based Urban Indian Health Institute reports that Alaska is among the top ten states with the highest number of missing and murdered Native Americans and Alaska Natives with 52 active cases. While some of these crimes are not domestic violence related, it does demonstrate the high rate of violence against Native women.

Recommendation: 1) Reauthorize the grant programs for Indian tribes under VAWA and make additional appropriations available to address the serious need for victim services in tribal communities. 2) Make permanent and increase the dedicated tribal funding stream included under the Consolidated Appropriations Act of 2019.

Discussion: As sovereign nations, tribes engage in a government-to-government relationship with the federal government and utilize their sovereignty to exercise care and control over their people. In exercising care and control in tribal communities, tribes must address gender-based violence in all forms. Yet resources are scarce, and culturally appropriate resources are practically non-existent. This resource disparity continues, in part, because tribes continue to be shut out of meaningful access to the Crime Victims Fund (CVF). Though the Consolidated Appropriations Act of 2019, includes a 3% set aside for tribal government, a permanent fix is needed. There must be a permanent government-to-government funding stream established for tribal governments accessing the CVF. Alaska Native women and children who are victims of crime are mostly shut out of receiving any state assistance as crime victims primarily because nearly 1/3 of Alaska Native Villages do not have law enforcement, thus cannot meet applicable requirements for funding—a police report number. We need equal access to resources such as domestic violence shelters, rape crisis services, legal services for victims, basic health services, mental health services and related services, alcohol and substance abuse treatment services, fatality reviews, which are vital to any meaningful response to violence in Alaska Native Villages.

Lack of Research on Violence Against Alaska Native Women

Discussion: In 2013, VAWA was amended to include the 229 “Alaska Native Villages” under the National Baseline Study being implemented by the National Institute of Justice (NIJ). The baseline study is intended to provide recommendations to enhance the effectiveness of federal, state, tribal, and local responses to violence against Indian women. It is a concern that research specific to violence against Alaska Native women committed in Alaska Native villages is lacking.