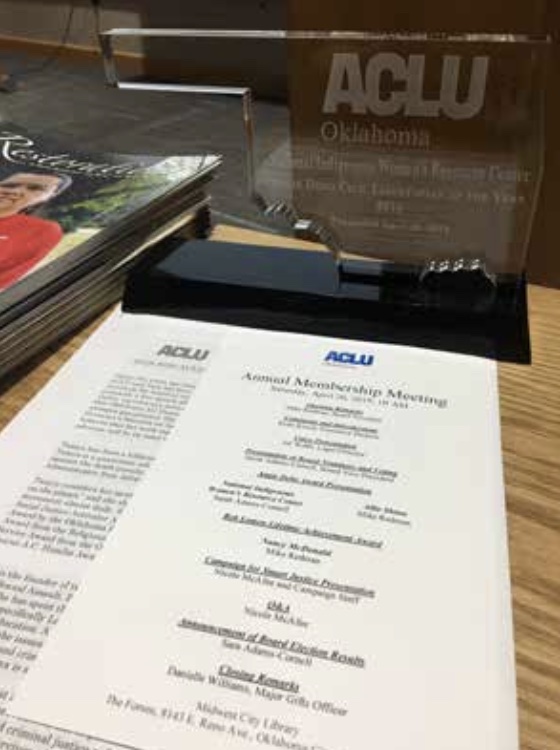 “The ACLU of Oklahoma is honored to present the 2019 Angie Debo Civil Libertarian Award to the NIWRC in recognition of their pursuit to protect women, especially indigenous women.” Said Sarah Adams-Cornell, Choctaw, Vice President, ACLU Board of Directors. “Much like the award namesake, NIWRC’s resolute advocacy to make known and change disparities impacting indigenous people, including VAWA is a gold standard. The empowerment provided to our indigenous women through NIWRC resources and training can be felt throughout Indian Country.”

The Angie Debo Award is named in honor of the writer, historian, and civil rights advocate Angie Debo, who relentlessly pursued justice in cooperation with the ACLU of Oklahoma during the late 1960s and 1970s. It is the highest award presented by the ACLU of Oklahoma and has been presented annually since 1971 for outstanding achievement in the fight for civil rights and civil liberties.

“NIWRC is honored to receive the 2019 Angie Debo Civil Libertarian Award,” said RedCorn. “We appreciated this award as a meaningful statement of support for our organizing efforts to end violence against Native women at its roots. It is support such as this award that sends the signal that laws limiting the authority of Indian tribes to protect women must be changed.”

A founder of NIWRC, Tillie Black Bear, often said: “Who is going to advocate for the safety of Native women if not us?” The passage of VAWA in 1995 opened the door for the historic changes we have seen over the last several decades. These changes are the result of on-going organizing efforts at the tribal, regional and national level to inform Congress and federal departments.

“This year, 2019, NIWRC is again organizing for lifesaving reforms needed under VAWA, and we hope that our allies will continue to support our efforts,” said Princella RedCorn, Communications Officer for the NIWRC. “Our organizing efforts to create the changes needed are rooted in the same injustices Angie Debo wrote about in her articles and books.”