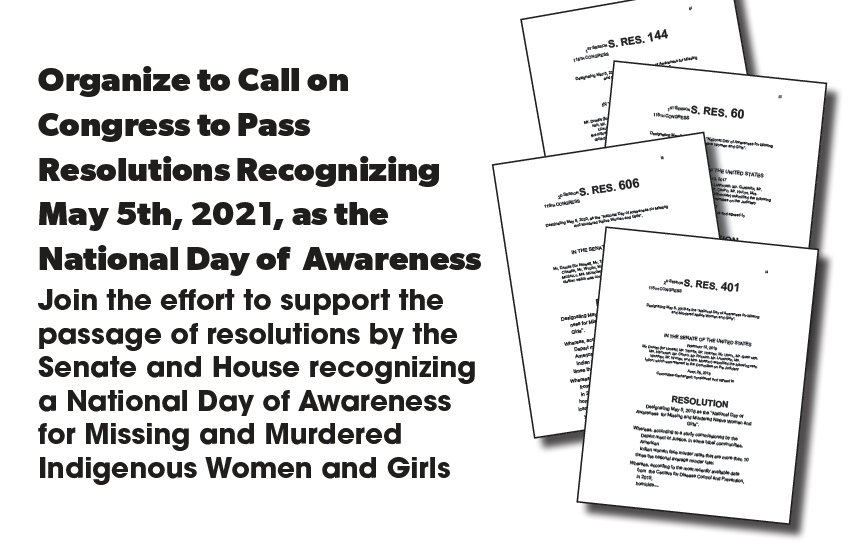 Support May 5th as the National Day of Awareness for Missing & Murdered Indigenous Women & Girls:

Support for recognition and acknowledgment of the crisis of missing and murdered Indigenous women through a congressional proclamation of a National Day of Awareness is now one of the largest tribal grassroots organizing efforts in the United States.

The initial concept for the National Day was created as a result of the community organizing of Malinda Limberhand on the Northern Cheyenne Reservation in Lame Deer, Montana.

Due to the inadequate response of the justice system, Malinda faced numerous roadblocks in reporting Hanna’s disappearance, conducting a search, holding the justice system accountable to prosecute her murderers, and obtaining services for Hanna’s son. Malinda relied upon her family and friends in her efforts for justice for Hanna—including organizing community members to conduct the search for Hanna. As in so many cases of MMIW, Hanna's family and community organized a march in Lame Deer calling for justice for Hanna and other unsolved murders of Native women.

The home office of NIWRC is located in Lame Deer, Montana, and, responding to Malinda’s calls for justice, Senator Steve Daines and Senator Tester reached out to NIWRC for assistance in the passage of a Senate resolution proclaiming a national day of awareness for MMIW.

In response, NIWRC launched a national campaign to gather signatures of organizations to educate and urge senators to support the resolution. In response, 175 organizations signed on. This list was provided to Senator Daines and Senator Jon Tester, who referenced it during Senate floor time as strong support for passage of the resolution. On May 5, 2017, by unanimous consent the Senate passed S. Res. 60, designating May 5, 2017, as the “National Day of Awareness for Missing and Murdered Native Women and Girls.” May 5th is when Hanna Harris was born.

In 2021, NIWRC is partnering with a working group comprised of the NCAI VAW Task Force, Pouhana O Na Wahine, the Alaska Native Women’s Resource Center, Alliance of Tribal Coalitions to End Violence, and the Indian Law Resource Center to call upon the Senate and House of Representatives to pass resolutions to honor Indigenous women by designating May 5, 2021 as a National Day of Awareness for Missing and Murdered Indigenous Women and Girls.