The Long Fight For Justice Continues

Missing and Murdered Indigenous Women and Girls is a National Crisis within the United States.

Organizing efforts, from the grassroots to a national level, have brought this issue into the public eye. As social justice actions continue to increase across Indian tribes and Native communities, lawmakers and government departments are being educated and held accountable to make the changes needed.

In 2021, increased grassroots organizing and community action will continue to call for foundational changes to systemic inequalities that separate Native women and make them a population vulnerable to violence.

The increased attention and political will to make meaningful change on the issue of MMIW is long overdue.

As affirmed in the 1993 Apology to Native Hawaiians and 2009 Apology to Native Peoples,1 the U.S. recognized that there have been years of official depredations, ill-conceived policies, and breaking of covenants by the Federal Government regarding Indian tribes and Native Hawaiians; and apologized for the many instances of violence, maltreatment, and neglect inflicted on Native Peoples. The release in 2018 of the U.S. Commission on Civil Rights Broken Promises Report also affirmed the need for the government to fulfill its trust responsibility with appropriate allocation of resources for tribal governments.2

This MMIWG crisis is in part what the U.S. apologized for—the lack of resources for tribes to provide justice and victim services; and the failure of local, state, and federal responses to these crimes.

The ongoing crisis of MMIWG is intertwined with the long history of colonization and the development of the United States as a country. Efforts at all levels of tribal, state, and federal government are required to begin making the changes needed. In addition, foundational changes are needed to address systemic barriers within the economic, social, and political sectors.

The changes required are at the foundational level requiring broad public support.

The Response of Congress to the MMIWG Crisis: Legislative Reforms, 2019-2020

The U.S. Congressional effort was launched in 2017 by the delegation from Montana after the murder of Hanna Harris on the Northern Cheyenne Reservation and other abductions and murders of Native women. The 2017 Senate Resolution calling for a National Day of Awareness marked the first Congressional recognition of MMIWG as a national issue. Every year since 2017, a resolution recognizing May 5th as a National Day of Awareness for Missing and Murdered Native Women and Girls has been passed in the Senate with increased support and awareness of the need to take action.3 These proclamations and social justice actions on May 5th have resulted in the increasing response from Congress and federal departments, as well as from states and localities.

In 2019, Congress introduced three bills in both the Senate and House to recognize, study, and increase the coordination and response of law enforcement agencies to the MMIWG crisis. The Savanna’s Act, Not Invisible Act, and Studying the Missing and Murdered Indian Crisis Act were introduced to address MMIW. The last bill providing a study by the Government Accountability Office (GAO) of the current government response to MMIW passed out of the House under the Violence Against Women Reauthorization Act (HR 1585). In 2019, none of these congressional efforts became law.

In October of 2020, Congress passed the Savanna’s Act and Not Invisible Act. The passage of these two bills is a victory for tribes across the country. Congresswomen Deb Haaland (D-NM) and Sharice Davids (D-KS) on the House side and Senators Lisa Murkowski (R-AK) and Catherine Cortez Masto (D-NV) on the Senate side led the charge alongside tribal leaders and grassroots advocates.

Savanna’s Act is named in honor of Savanna LaFontaine- Greywind, a 22-year old pregnant citizen of the Spirit Lake Nation in North Dakota who was viciously murdered in August 2017. The Act aims to improve MMIW data collection and access, and directs the Department of Justice to review, revise, and develop law enforcement and justice protocols to address missing and murdered Indigenous peoples. 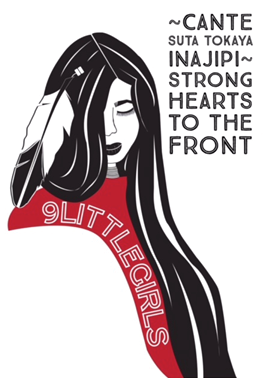 The Not Invisible Act complements Savanna’s Act, with its purpose to identify and combat violent crime against Indians or within Indian lands through the creation of an advisory committee on reducing violent crime against Native people. Comprised of tribal leaders, law enforcement, federal partners, service providers, and survivors, the advisory committee will make recommendations to the U.S. Department of Interior and Department of Justice on addressing violence against Native Americans and Alaska Natives.

While these two bills are a small step forward in beginning to address the impacts of centuries of colonization and historical and intergenerational trauma, we are grateful to survivor families, members of Congress, tribal leaders, Native organizations, and the many individuals who supported the Acts from the beginning and tenaciously monitored and advocated for them. The passage of these Acts are important steps in the right direction for our relatives seeking justice for their missing and murdered loved ones and for all our relatives who have experienced violence in their lives.

Legislative reforms are also reflected in actions by city, county, state, and national legislative bodies. From the entire West Coast to the Great Plains, Southwest and Midwest, state lawmakers have acted to address the MMIWG crisis. Numerous states (AK, AZ, CA, NM, MN, MT, ND, NE, OR, SD, UT, WA) have introduced and passed legislation such as establishing an MMIW Task Force, proclamations recognizing the National Day of Awareness, and/or authorizing and funding a study, and more. 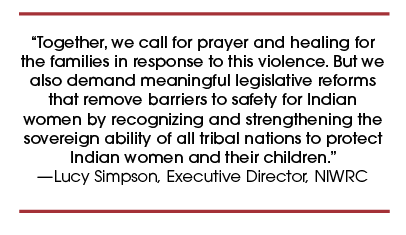 Recognition and Support for Tribal Authority and Responses

The normalization of violence against Native women occurred over several hundred years as federal law and policies eroded the authority of tribal governments to protect women, sanctioning efforts by and interests of the military, religous institutuons and corporations that resulted in violence against women. It happened as the fundamental right of Native women to safety as human beings was ignored and violated by the United States. These laws and policies over time placed Native women in an “unprotected” status. Laws shape public perception and change the cultural norm of what is unacceptable or is a crime. Many of the laws that led to this crisis continue to exist today and must be changed.

The national movement has joined with national and congressional champions to propose legislative changes in two essential reauthorization bills of the Violence Against Women Act and the Family Violence Prevention and Services Act. We call on Congress to move quickly to pass these bills and place them before President Biden for his signature to become law.

“Together, we call for prayer and healing for the families in response to this violence,” said Lucy Simpson, Executive Director, NIWRC. “But we also demand meaningful legislative reforms that remove barriers to safety for Indian women by recognizing and strengthening the sovereign ability of all tribal nations to protect Indian women and their children.”