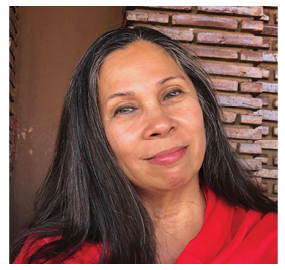 Through the courageous stories of sisters like Elsie Boudreau, Louise Charbonneau Aamot, Malinda Limberhand, and from personal experience, we know that healing is possible.

Our larger challenge as a social justice movement is creating structural change within the United States government in the hope of preventing future violence against Native women and the generations to come.

Throughout 2020, police killings generated a groundswell across a broad spectrum of American society calling for systemic change to address structural inequalities.

Will such change be inclusive of justice for Native women and the crisis of missing and murdered Native women—the victims and survivors of domestic, sexual, trafficking, and hate crimes?

Rose Burkowski, a friend, beloved elder, and lifelong advocate, lived her life in remote Alaska and encountered the harsh reality of violence committed against her Yup’ik sisters. Rose always carried a deep sense of hope and often shared, “Nothing is impossible. Everything is possible.” Her words can light our path, our efforts, in 2021.

THE STORY OF THE THREE SISTERS

One spring morning, three sisters left camp with their buckets to get water from a nearby stream. The stream was narrow but deep and fast flowing. The sisters were enjoying the warm weather and visiting as they walked to the stream.

As they neared the stream, they began to hear the cries and screams of babies. The sisters dropped their buckets and ran to the stream. To their horror, there were dozens and dozens of babies floating down the stream; many were drowning.

The first sister jumped in and began catching and throwing babies on to the bank of the stream as fast as she could.

The second sister hollered, “You’re not saving enough babies!” She jumped in and began teaching the babies to swim so they could save themselves.

The third sister began running upstream. Her sisters yelled at her to help. She turned and yelled, “I am. I’m going up the stream to see how the babies are getting in the water in the first place.”

The Challenge of Addressing Structural Inequalities

The question before us is—How do we prioritize and integrate addressing structural inequalities into our ongoing organizing efforts to increase safety and justice for Native women?

Structural inequalities for Native women are interwoven with the current political, economic, and social institutions of the United States. Through its authority as a government, the U.S. enacted laws, developed policies, funded programs, and supported social practices to eradicate and forcibly assimilate Indigenous peoples.

These structural inequalities created by colonization are not just historical facts but are alive today in the laws and policies that separate Native women from other populations, increasing their vulnerability to violence in a multitude of ways.

Indigenous women face both the structural inequalities resulting from the colonization of their nations and also gender-based inequalities and violence.

The litmus test of structural change is more than acknowledging the barriers. It must be removing and replacing the laws, policies, and programs separating Native women from living lives free of violence. While this includes accessing meaningful justice-related services, it also requires the full range of governmental departments and services—healthcare, housing, education, and others.

Beyond targeted reforms of the government, safety is linked to inclusion and fairness in the political, economic, social, and cultural institutions of the U.S. as a nation.

In 2021, and going forward, acknowledgment of injustices must be connected to changes that structurally correct the injustice. To the call for ongoing public awareness, we add the task of informing the public of the specific reforms required to dismantle systemic barriers. These reforms include reforms within the VAWA Reauthorization Act such as restoring tribal jurisdiction over non-Indians commiting violence against women and children and resources to support services such as shelter, housing, and advocacy for survivors of domestic and sexual violence. Public awareness must be linked to intentional reforms.

Federal laws and policies created broad social permissions and tolerance of violence committed against Indigenous women. And while the struggle to correct the structural inequities are challenging, a far greater challenge is altering the dominant societal view of Native women.

In preparing for this April as Sexual Assault Awareness Month, we aim to share information beyond the statistics that one in three Native women will be sexually assaulted in her lifetime by offering recommendations from survivors. In organizing for the May 5th National Day of Awareness to honor Native women who are missing or have been murdered, we identify and share recommendations from family members of our missing and murdered sisters to reform and remove structural barriers.

We raise the question of—Why? And to the answers, the reasons given, we call for systemic reforms.

The answers to Why? are not simple, but they are not ‘mysteries.’

The recurring violence committed against Indigenous women spanning generations is not natural. Domestic and sexual violence is not natural. These are the products of humans using the structures of governments to impose and achieve specific purposes through laws and policies. Essential to the creation of structural inequities are laws and policies reflective of specific beliefs and goals. One example is the Code of Indian Offenses criminalizing specific Indigenous spirituality; another is the Indian Civilization Act authorizing the forced removal of children from their parents to the horrors of government boarding schools.

Looking forward to 2021, the central question for the movement for safety is less the government’s role in the past but how current departments and agencies of the federal government maintain structural inequities separating Native women. Understanding and removing structural inequalities do not occur in the abstract but in the everyday functions and policies of government impacting the lives of Native women—the decisions, relations, and mandates of government.

Achieving these structural changes requires partnerships within the federal, state, and local governments because these employees are the people who implement the changes step by step, day by day. The structures that must be changed are currently considered the ‘normal’ operations of departments and agencies—the everyday policies separating Native women as invisible, less than, and vulnerable.

For these reasons mass public education is essential to establishing a new social standard of intolerance and accountability for violence against Indigenous women for the United States as a nation.

The structures that must be changed are currently considered the ‘normal’ operations of departments and agencies—the everyday policies separating Native women as invisible, less than, and vulnerable.

In this sense, 2021 presents a political season of hope.

In addition, President Biden has the specific commitment, knowledge, and will to create change within the federal government. The President has championed safety for Native women for over two decades. It was then-Senator Biden who included Indian tribes in the 1995 Violence Against Women Act, increased the VAWA funding stream from 4% to 10% under VAWA 2000, and included the Safety for Indian Women Title under VAWA 2005. In his previous role as Vice President, Joe Biden supported the restoration of tribal jurisdiction over non-Indians in domestic violence cases under the VAWA 2013.

The face of the new Administration, including Vice President Kamala Harris, nominee Deborah Haaland for a Cabinet position as Secretary of the Department of Interior, and so many others, is historic, and our social justice movement can strengthen the potential for change under their leadership. Their individual personas represent a step toward normalizing the reality that Native women and women of color can provide leadership at the highest levels of the United States political system.

We can support their efforts by identifying and presenting solutions to structural inequalities and building the societal groundswell needed for such changes to occur. Tribal leaders, policy experts, and advocates can offer their unique understanding of violence against Native women from their work every day to keep Native women safe.

The purpose of Restoration is to connect those concerned about the safety of Native women with the information necessary to create the changes needed. In this Restoration, we lift the voices of Native women who challenged the systemic responses to sexual violence and the crisis of missing and murdered Indigenous women. We honor the courage and commitment of these sisters to rise and stand against systemic injustice.

Despite the devastating losses of 2020, like our elder Rose did throughout her life and years of advocacy, we must carry a deep sense of hope for the potential of the next four years.

It is an exciting time—where nothing is impossible, and everything is possible