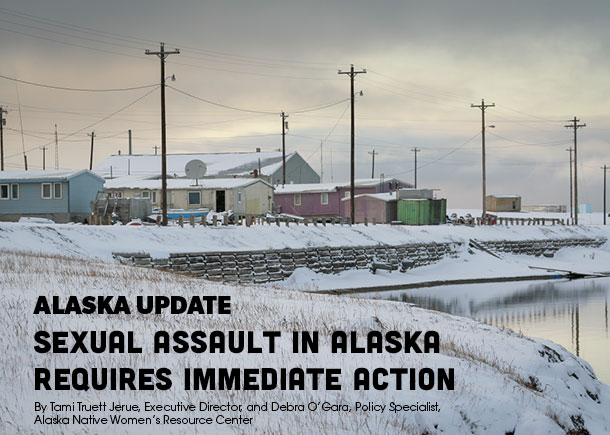 Sexual assault continues to escalate throughout this country and the hardest hit continue to be Indigenous women and girls. Results from the National Intimate Partner and Sexual Violence Survey, issued by the Center for Disease Control (CDC), states that 21% of women reported completed or attempted rape sometime in the their lifetime. 43% of these report that the rape or attempted rape first occured when they were between the ages of 11 and 17 and 38% between the ages of 18 and 24.1 This survey concludes that 20.8 million women and girls reported a rape or attempted rape before their 25th birthday.

The National Institute of Justice reported that in 2020, “Alaska’s rape incidence was well over twice the national rate.” It is widely believed that incidents of domestic violence, rape, and other forms of sexual assualt go unreported, especially among Alaska Native women. Therefore, the rate of sexual abuse is likely much higher than double the national rate.2

There are concrete reasons for these high rates as well as for the underreporting to law enforcement. In Alaska, justice has been hard to achieve for Alaska Natives, in both urban centers and rural villages. Why? The general answer is rural villages are isolated, often with no law enforcement. When there is local rural law enforcement, usually Village Public Safety Officers, there is minimal to no training provided on how to respond appropriately to sexual assault victims. The same occurs in cities and larger hub village communities.

In addition, there have been numerous reports exposing that many individual law enforcement officers have been arrested or convicted of domestic violence or have had domestic violence protection orders issued against them, often prior to being hired to work in Alaska.3 There is at least one incident, in Nome, where an officer was arrested for the abduction and murder of a young Alaska Native woman.4 Given these incidents by officers, although small in number compared to the total number of officers statewide, coupled with the disproportionality of arrests and convictions and general discrimination throughout the State, it is understandable that there is a strongly held distrust of the State-operated law enforcement and justice system. 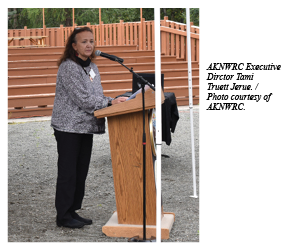 There are also tangible barriers to safety for Alaska Native families. There is no 911 system set up statewide. This emergency response system would assist with location of victims and speed up response time for help to arrive. Law enforcement has been slow to respond because they are not present in the village, it takes days to travel, there is a shortage of officers, or the sexual assault incident is not a priority. There have also been several situations, after law enforcement has responded, where investigations have been slow, not conducted, and/or no communication was made with the family or community.

All of these beliefs, stories, and conduct by law enforcement––whether true, partially true or not true at all––create a situation where victims of sexual assault and their families distrust local and state law enforcement. It is law enforcement that should be helping to increase public safety, but that is too often not the case. In addition, the state criminal justice system has not been available to assist with building up a sense of safety for Alaska Native citizens. It is important that Alaska’s law enforcement agencies as well as the Alaska Department of Law and Court System understand the level of distrust amongst Alaska Native communities so that these vital public agencies can better engage with victims and families to address the high rates of abuse, assault, and murder of our Indigenous relatives.

In the last few years there have been numerous cases that expose these problems. In 2013, in the small community of Kake on Kupreanof Island, 13-year-old MacKenzie Howard was found beaten to death. Alaska State Troopers arrived a day later, and after a lengthy investigation, a suspect was detained. However, because the suspect was a minor, his identity and the resolution of the criminal case was kept secret, even from the family.

Four years later in 2017, also in Kake, Jade Williams was found dead after she had been to a party. Again, because there is no law enforcement in Kake, Troopers did not begin an investigation until the next day. In Jade’s case, however, no arrests have been made, no one has been held accountable, and the family and community have been left with no closure. 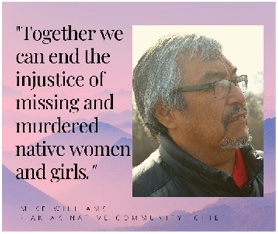 The town of Nome has been especially hard hit with unresolved and uninvestigated sexual assaults. In 2017, Clarice Hardy reported she was drugged and sexually assaulted. Though she did not remember anything due to the drugging, there was video, taken on her own phone by the assailant’s girlfriend. Hardy, at the time, worked for the Nome Police Department as a dispatcher and was told by the Lieutenant that the assault would be investigated. After a frustrating year of waiting, no investigation and no arrest was made.5

Hardy’s situation was not a unique or isolated case. Several Alaska Native women began to meet and compare stories and facts.They pieced together a pattern of non-response to reports of rape, assault or attempted rape, especially if the victim was Native or had been drinking. 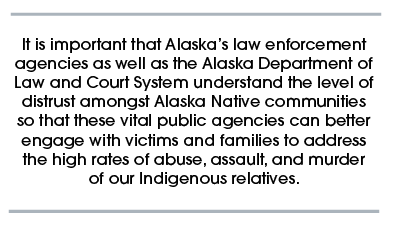 The failure to take seriously the issue of sexually-related or violent crimes is not isolated to just rural villages. In Anchorage, Justin Schneider violently attacked a woman, choked her to unconsciousness, and ejaculated on her face. The woman thought she was going to die, because Schneider told her he was going to kill her. The District Attorney did not charge sexual assault or attempted murder. The DA offered a plea deal of second degree assault and Schneider walked away. The DA, his bosses in the Department of Law, and the judge defended this outcome saying the law defining sexual assault did not fit the crime admitted to. Public outcry was swift and the judge was removed when he failed to prevail in a public retention ballot. The “loophole” relied on by the justice system was later closed; however, Schneider’s charge still remains troublesome.

Many sexual assaults go unreported because of the long-established expectation that no action or investigation will happen, or that even if an arrest is made, the DA’s office may decide not to pursue the case or the justice system may fail to hold the perpetrator accountable for the harm they caused. The result of all of these possible scenarios—violence—is given the green light. Sexual violence against Indigenous women is sanctioned, as it has been for the last 250 years.

It is crucial to recognize that there are multiple levels of need and support for victim/survivor reform on all levels of the justice system. There has to be a consistent, reliable, and sustainable emergency response that is available for each and every Alaskan community, large and small, even those that are predominantly Native. There must be education about sexual assault and violence against Indigenous LGBTQ2S people across all Federal, State and Tribal agencies, not just law enforcement but all justice and human service systems. There has to be a coordinated effort to increase supportive services to victims of violence and methods to hold perpetrators accountable for their behavior.