I am named after my maternal grandmother whom I have never met, but I feel her spirit when I introduce who I am. I come from a long line of proud Yup’ik people who inhabited the southwestern part of Alaska for thousands of years living off the land and, according to Yuuyaraq— the Way of the Human Being—living out what it means to be a good relative.

First, I want to say that we are in this together. No one is greater or less than anyone else. As I share, I don’t admit having all the answers, but I speak my truth and share my experiences of my healing journey. I honor all of you for having the courage to read about trauma and believing that healing is possible. I honor you for being of service to our people, to our children. In that way, we honor our ancestors and hold hope for a safe world for our children.

I will share a bit of what happened to me as a victim of child sexual abuse. I will also share what I did to survive and protect myself because of the abuse I endured. My hope is that through my story, you will come to see that healing is not only possible, but how freeing the process is and how what happened to many of us is a legacy of the actions of those who colonized us. That you will come to believe and know that we can heal collectively. Please give yourself permission to be present and remind yourself that you are safe if you’re finding yourself triggered by what is shared.

Each person’s experience is their truth. While what gets shattered because of abuse/traumatic experiences is different for everyone, speaking TRUTH and being believed is universal medicine to heal. Healing takes work, it takes practice and it takes patience. Healing requires love, justice, and truth.

I was sexually abused by a family friend who happened to be a priest. I was 10 years old and vulnerable. As a result of him paying attention to me, I felt special. I did not equate his actions as sexual abuse until much later because it was not violent. I thought it was love. This relationship went on until I turned 19 and I wrote a letter to him while in college that I never wanted to be alone with him again. After that, I never was. Until that happened, it was almost like we were boyfriend/girlfriend, like we were a couple. I received “love letters” and I looked forward to being with him. I remember at one point when I was a teenager and had a boyfriend my own age, he had me go to confession in his room. I thought that was strange, but he was the adult and a priest. I also remember asking a close friend whether she thought it was weird to be in such a relationship with a priest. But I didn’t know what to do about it and I never told my mom. 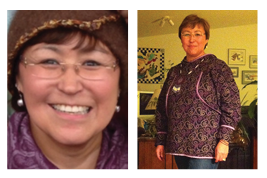 It wasn’t until years later when my daughter turned 10, the same age I was when the abuse began, that I could no longer shield the truth from my consciousness. I remember looking at her and wondering how anyone could take advantage of such innocence. During this time, there was a group of 20 men from my village of St. Mary’s that had filed a lawsuit against the Catholic Church. They had been sexually abused by the priest that served our village when I was growing up. My brother happened to be one of those that was abused, but he had yet to come forward. It was then that I realized that I was not the only one abused by a priest. I filed a lawsuit against the Catholic Church and, once it was settled, served as an advocate for other survivors in various capacities. That is how I’ve come to know that what happened to me, happened to many. Therefore, I say what happened, happened to us collectively. I believe our history as Alaska Native and American Indian people must be rewritten to include clergy sexual abuse.

Before I went public with my story, I talked with Grandma Rita Blumenstein and got permission. She told me that it was time. Throughout various points of my healing journey, I have felt held, and that was one of the times. Held by our ancestors—by my side, in front of me pulling me forward and behind me, pushing me to keep going. I don’t believe any of this is by accident. I find that the more I speak my truth–,and people believe me, it’s like “shedding old, bruised, harmed skin”—the closer I get to the essence of who I am—that is where I find strength, in the truth. I do not attest that I am healed. I just say I am healed enough…healed enough to speak, acknowledge my Truth, and encourage the truth of others in a loving, gentle way.

I have come to a point where I know I was sexually abused and have rid myself of the shame and guilt I carried. I have come to see that being vulnerable was not a bad thing, but that this person who I thought loved me took advantage of my vulnerability. I did nothing wrong. I used to equate my vulnerability as a weakness, but I know now that all children are vulnerable and have a birth right to feel loved, safe, protected and put in a place of honor.

I protected myself. Relationships were difficult, particularly relationships with others who I viewed as having authority over me and who expressed affection. Once I learned that I was “special” to that person, I didn’t know how to act, and I would almost freeze. It’s like I had to figure out what it was that they wanted from me to keep that feeling of being special. I have come to realize that because of the dynamics of the sexual abuse I endured over all those years, feeling special to the man who abused me came at a price. I had to sacrifice my sacredness (we are all born sacred), which translated into shame. I had become a victim of emotional, spiritual and sexual abuse at the hands of the man I loved and thought loved me.

My thinking patterns were flawed. I believed for a long time that I was less than…less than others, inferior. And even today, I have to be careful of that way of thinking. Some of this comes from intergenerational trauma, I believe, and the sense of internalized oppression. I had to learn to use positive words and thoughts toward myself. I had to learn to identify positively with my needs and find ways to get those met. To be compassionate toward myself.

School was a safe place. I could engross myself in my studies and I found that I could do well. I worked hard to get the best grades. It’s almost like if I didn’t get the best grades, it proved that I was that needy child and that there was something wrong with me.

I had to protect myself from the truth—like I was allergic to the truth, as it would reveal my inadequacies….the shame I felt. I had to use kindness and compassion toward myself.

Today, I can sit in my own body and be okay with it. I can be myself with nothing to hide, with my strong side and my vulnerability. It’s almost like I can smile at my insides. I have forgiven myself for the negative thinking patterns and thinking I was less than. I can be gentle with myself. And I ground myself in that truth. That we are not alone.

I have to hold the victim within and acknowledge that victim in order to grasp my survivor within…because I am both. I could not be a survivor without having been a victim. It’s about integrating both while recognizing we are part of a greater Universe, we are our ancestors and our children deserve to know that beautiful truth.

Healing through the truth not only affects you, but others, too. That is how it works. The opposite is true as well; not telling the truth is suffocating. It keeps you from growth, experiencing life and all that life has to offer—love, laughter. Today, I feel free from having to protect myself from getting hurt, I am free to love and to love myself, I can accept myself and rejoice in my own strengths and vulnerabilities, I can laugh fully and just BE without fear. It’s almost like I am seeing the world with new eyes—with the eyes of my heart. And I can listen with my heart, knowing we are all interconnected, with ourselves, each other, the land, the animals, the Universe and our ancestors. What a gift.

At one point after coming forward publicly, I had a conversation with my brother. He said:

“It makes it okay for other people to talk about what’s going on.”

He made me laugh when he said he amazes himself sometimes by what he says, and he was glad he made me laugh. My hope for you and all our Native people who have been impacted is that through collective healing, we can be the heroes our children deserve and so need. Healing is possible.

In closing, I want to share a quote by Grandma Rita Blumentstein. She says...