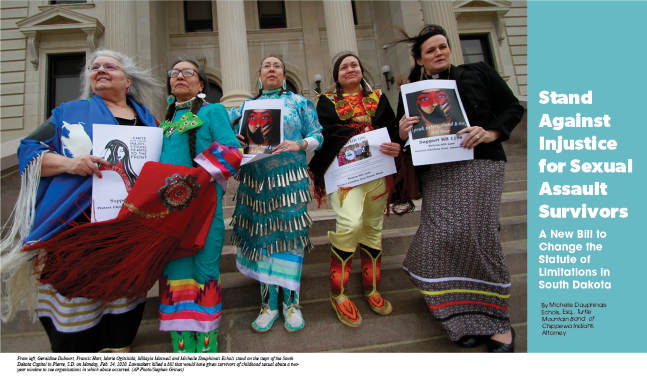 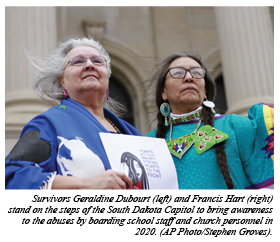 In 2021, how different is the rule of law in the lives of Indigenous peoples in the United States?

The efforts of Native survivors and Indian nations have increased public awareness of how the United States used laws, policies, and the courts to prevent justice. The theft of Native land, removal of children, and criminalization of spirituality and language were done under the color of law—legislative acts, court rulings, and orders by government officials.

The struggles of nine sisters in South Dakota tell us we have a long way to go on the road to justice and safety.

The sisters have courageously stepped forward to tell their stories of the sexual abuse they suffered as young girls at St. Paul’s Catholic boarding school. In 2021, they hope to change the law and help other survivors of such sexual abuse. Their story is that of thousands of American Indian children taken from their families as a result of United States’ laws and sent hundreds of miles away to face cultural genocide and reeducation. They have been pushing for awareness and fighting for justice in South Dakota for almost two decades now. 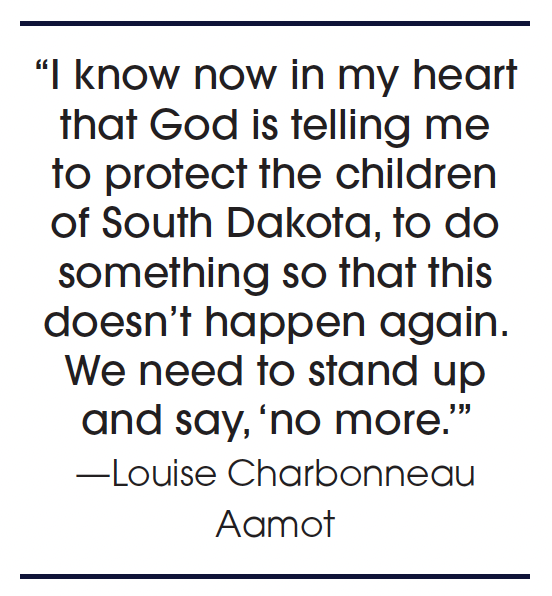 The reality that in 2021, the sisters are prevented access to justice by the South Dakota lawmakers and the court is unconscionable.

In 2010, just days before the Charbonneau sisters were set to go to court, South Dakota lawmakers passed a last-minute bill to limit the state’s child sexual abuse statute of limitations, taking away the ability of abuse victims older than 40 to pursue legal action against institutions that facilitated and even covered up child sexual abuse. The bill was enacted to deny victims of abuse like Louise Charbonneau Aamot and eight of her sisters justice under the law. In South Dakota where many Native people attended boarding school, this new law effectively blocked virtually all Native American boarding school survivors from being heard in court.

The legal barrier created by the South Dakota lawmakers reflects the ongoing structural inequalities ingrained in a political system that uses legal authority to deny justice.

The molestation, rape, and torture of the nine sisters by priests, nuns, and church staff running St. Paul’s demands justice. The repeated abuse they endured for years at the hands of sexual assailants—criminals— who were their teachers and caretakers, is horrific. One sister agonizingly tells of being raped by a priest, getting pregnant, and having a forced abortion performed by nuns who incinerated the baby.

“There were tunnels built under the school that the abusers used to have access to the children in the dormitories at night while everyone slept,” said Michelle Dauphinais Echols, an attorney and member of the Turtle Mountain Band of Chippewa Tribe who spent her early years at the school campus and is the author of the bill being presented to the South Dakota legislature.

Statute of Limitations—Three Years From the Time the Abuse Occurred

The nine sisters filed suit against their abusers, including the Native American boarding school and the church, which went up to the South Dakota Supreme Court in Bernie v. Blue Cloud Abbey. The court held that the statute of limitations for childhood sexual abuse did not apply in these cases—instead, a more restrictive statute of limitations applied, requiring the lawsuit to be filed within three years from the time the abuse occurred. A statute of limitations is like a legal stopwatch dictating when the time to file a lawsuit runs out. The court also said that the statute was not meant to apply to institutions like the church and diocese. That meant the nine sisters’ claims were blocked from being heard in court. South Dakota lawmakers didn’t stop there. In addition to enacting the current statute of limitations of three years from the abuse, or three years from the time you discover the abuse, no one aged 40 years or older can recover damages from anyone other than the person who did the actual sexual acts. This language stops all boarding school survivors of abuse from pursuing their claims.

“Common law never contemplated these types of claims against boarding schools run by the church until relatively recently," Dauphinais said. "The Native American boarding school narrative is unlike anything before or after it in history and it doesn’t fit within traditional law principles, so the legislatures and courts have got to account for that in these statutes and cases."

The proposed new state bill will eliminate the statute of limitations to allow survivors of childhood sexual abuse to bring suit at any time and to file suits against institutions that facilitated the abuse, like the schools.

“Abusers should not be protected just because of the passage of time," said Geraldine Charbonneau Dubourt, member of the Turtle Mountain Band of Chippewa Tribe, and one of the nine survivors. Molestation and rape of children is not something we, as a society, should tolerate. It has been an uphill fight. We really need the people of South Dakota to call their state representatives in support of the bill to get it passed."

For almost two decades, the Charbonneau sisters have struggled for justice and legal changes for survivors of childhood sexual abuse. The sisters need help in their efforts for justice—they need the national movement for the safety of Native women to support their efforts. Louise passed away on February 8, 2020, but her courageous words remain. 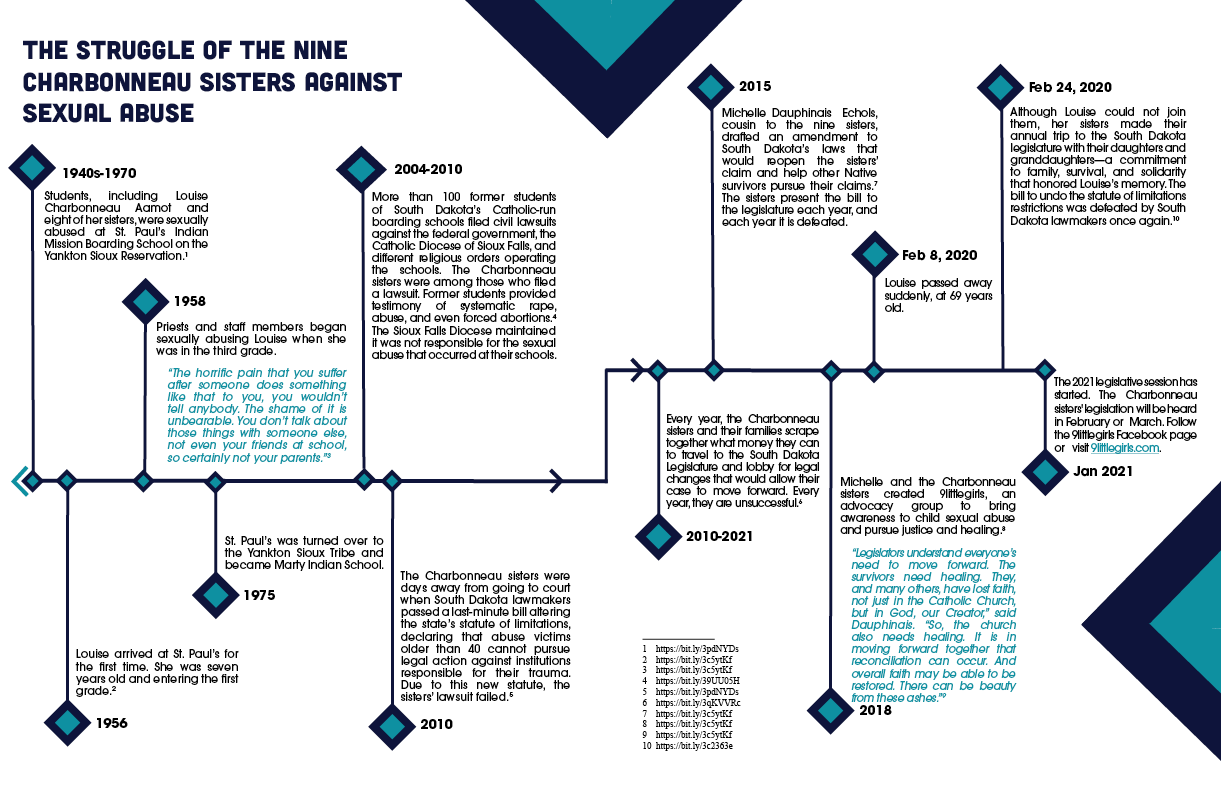