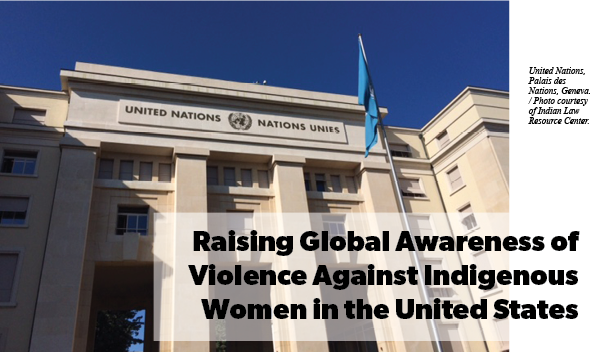 Throughout the year, a number of recurring dates and meetings at the United Nations and the Organization of American States are particularly relevant to our work to end violence against Indigenous women. Although most in-person events have been moved to virtual platforms due to the COVID-19 pandemic, the Indian Law Resource Center continues to look for ways we can use the United Nations and Organizations of American States as advocacy spaces to inform the public and the international community about the human rights dimensions of violence against Indigenous women in the United States. This update reports on recent and upcoming events. 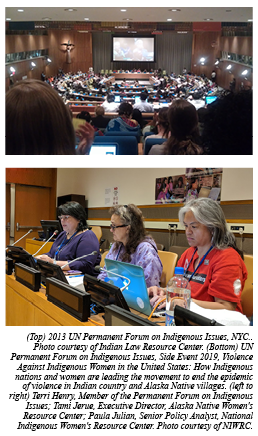 International Day for the Elimination of Violence Against Women

Each year on November 25, the United Nations observes the International Day for the Elimination of Violence Against Women. To mark this date in 2020, UNESCO, the UN Educational, Scientific and Cultural Organization, asked the Indian Law Resource Center to participate in a high-level roundtable on “Engaging men and boys to address the root causes of violence against women.” Robert T. Coulter, Executive Director of the Center, spoke about the need for policy reforms to enable local, tribal governments to respond more effectively to gender-based violence, especially crimes committed by non-Indigenous men. Center Senior Attorney Christopher T. Foley addressed the need to

“Ending violence against women must be a community project,” Foley said. “Changing federal law is essential, but we change federal law so that we can enable tribal governments and tribal communities to act. And that means everyone, including men and boys, must join together to create laws and standards that express our traditional cultural values that women are sacred and domestic violence is never acceptable.”

The Commission on the Status of Women (CSW) is the UN’s principal intergovernmental body that focuses exclusively on the promotion of gender equality and the empowerment of women globally. The CSW will meet in New York from March 15-26, 2021, to focus its work on the priority theme of women’s “full and effective participation and decision-making in public life, as well as the elimination of violence, for achieving gender equality and the empowerment of all women and girls.”

A critical element of the CSW’s work is the active participation of non-governmental organizations (NGOs) in its sessions, particularly through Parallel Events. This year, NGO participation will be virtual due to the pandemic. The CSW has approved a Parallel Event sponsored by the Alaska Native Women’s Resource Center; Indian Law Resource Center; National Congress of American Indians; National Indigenous Women’s Resource Center; the Native Women’s Society of the Great Plains; the Coordination of the Indigenous Organizations of the Brazilian Amazon (COIAB), the leading Indigenous rights organization working in the Brazilian Amazon which represents some 160 different Indigenous peoples; and the International Mayan League, an NGO that works with Mayan communities in Central America and the United States.

The program, “Violations of Indigenous Women’s Rights: Brazil, Guatemala, and the United States,” will feature a panel discussion with women from these organizations focusing on specific political and advocacy work their organizations are doing and how the long-term effort to end gender-based violence helps to achieve gender equality and empowerment in the present. The Parallel Event is scheduled for March 22, 2021 at 1:00 p.m. Eastern. When available, details on how to attend this and other CSW Parallel Events will be posted at: bit.ly/3qyu7PN.

The Permanent Forum is a high-level advisory body to the UN Economic and Social Council that meets for two weeks every year at UN Headquarters in New York. It has a mandate to deal with Indigenous issues related to seven key topics: economic and social development, culture, the environment, education, health, and human rights.

"In the context of addressing violence against Indigenous women in the United States, these seven components offer the opportunity to identify and address structural inequalities separating Native women from other

women in the United States,” Walker said. “Systemic barriers are the foundation of the vulnerabilities that for generation-after-generation result in the suffering and death of American Indian, Alaska Native, and Native Hawaiian peoples.”

This year, the Permanent Forum will hold its 20th Session from April 19-30, 2021, under the theme “Peace, justice and strong institutions: the role of indigenous peoples in implementing Sustainable Development Goal 16.” The UN’s Sustainable Development Goal 16 aims to promote peaceful and inclusive societies for sustainable development, provide access to justice for all and build effective, accountable and inclusive institutions at all levels. Details about this session will be available at: bit.ly/2XT8ZY2. 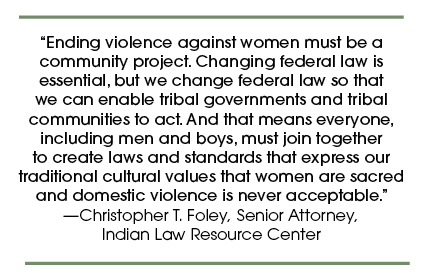 When an Indigenous woman in the United States goes missing or is murdered, it is a tragedy that we all grieve. It is a crime, and we must demand our federal, state and tribal justice systems to respond effectively. It is also a human rights violation, and we must go to the appropriate international bodies to demand action from the United States.

Indigenous women’s human rights are expressly recognized in the UN Declaration on the Rights of Indigenous Peoples and in the American Declaration on the Rights of Indigenous Peoples. They include, but are not limited to, rights to gender equality and to live lives free of all forms of violence and discrimination. These rights are violated when crimes against Indigenous women are not investigated as carefully as crimes against men, nor prosecuted as zealously as crimes against non- Indigenous women. Our tribal nations have collective rights of self-determination and self-government, which include the right to maintain our own juridical systems. These rights are violated by United States law that strips our governments of the authority to protect Indigenous women, restricts tribal law enforcement investigative authority, and denies our courts the jurisdiction to enforce laws against all perpetrators regardless of their race or Indigenous status.

Advocacy to raise global awareness of violence against Indigenous women and missing and murdered Indigenous women (MMIW) in the United States has been an ongoing effort for some time. For example, in 2011, the Inter-American Commission on Human Rights, an organ within the Organization of American States, granted its first-ever thematic hearing on the epidemic of violence against American Indian and Alaska Native women and the role of United States law in creating and sustaining this human rights crisis. The hearing was requested by the Indian Law Resource Center, the National Congress of American Indians Task Force on Violence Against Native Women, Clan Star, Inc., and the National Indigenous Women’s Resource Center.

“At that time we dedicated the hearing to our missing and murdered Indigenous sisters throughout the Americas and the lost generations,” notes Walker, “and our recommendations to the Commission included support of U.S. legislation restoring the criminal authority of Indian nations to prosecute non-Native perpetrators of violence against Native women, inclusion of tribal specific provisions in sex trafficking legislation, and the development of a national protocol and reporting system for handling and monitoring missing Indigenous women cases.”

Since then, efforts have continued both in the OAS and the UN human rights systems. At the United Nations, the Commission on the Status of Women and the Permanent Forum on Indigenous Issues are both bodies with mandates to address these sorts of human rights violations. This year, the CSW will explicitly consider how violence against women and girls is a barrier to achieving gender equality and empowerment.

The Commission has repeatedly commented on the specific issues facing Indigenous women. For example, in its 2013 Agreed Conclusions, the Commission noted that “violence against women and girls persists in every country” and is “a form of discrimination that seriously violates and impairs or nullifies the enjoyment by women and girls of all human rights and fundamental freedoms.” The Commission then went on to specifically recognize that “Indigenous women often suffer multiple forms of discrimination and poverty which increase their vulnerability to all forms of violence” and recommended that states “ensure women’s and girls’ unimpeded access to justice” and “just and effective remedies” and urged states to “end impunity by ensuring accountability and punishing perpetrators of the most serious crimes against women and girls.” By their very nature, MMIW cases raise exactly these issues.

“The impunity of perpetrators is assured when crimes are not even investigated,” notes Foley. “There are no just and effective remedies and no meaningful access to justice for victims if there is no prosecution, and our sisters are taken and murdered at such terribly high rates not by chance, but due to overlapping forms of discrimination—because they are Indigenous, because they are women, and because poverty makes them vulnerable.” 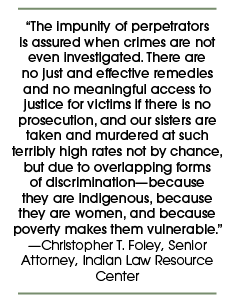 This year’s theme opens up a space to talk to the United Nations about these horrific crimes and about the United States’ failure to fully address these violations of human rights and Indigenous rights.

The Permanent Forum on Indigenous Issues’ theme, “Peace, justice and strong institutions: the role of Indigenous peoples in implementing Sustainable Development Goal 16,” is also relevant to discussions about MMIW. The Sustainable Development Goals are part of what the UN calls the 2030 Agenda for Sustainable Development. The Agenda was adopted by all UN Member States in 2015, and is described as a “shared blueprint for peace and prosperity for people and the planet, now and into the future.” Goal 16 includes a series of targets, including to significantly reduce all forms of violence and related death rates; to end trafficking and all forms of violence against children; to promote the rule of law at the national and international levels and ensure equal access to justice for all; to develop effective, accountable and transparent institutions at all levels; to ensure responsive, inclusive, participatory and representative decision-making at all levels. 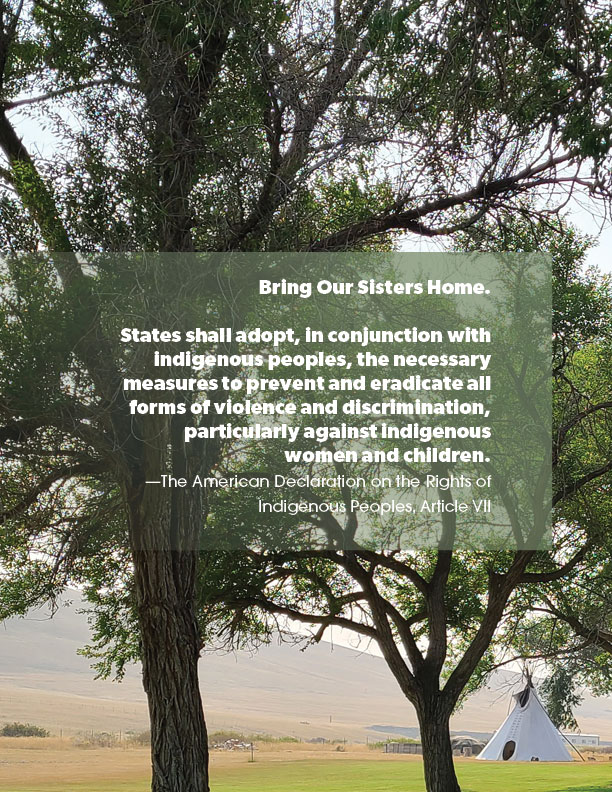 The absence of an adequate response to MMIW cases is rooted in systemic, institutional failures. The criminal jurisdictional and law enforcement gaps in Indian country undermine the rule of law. Perpetrators face no accountability, Indigenous women are less protected than other women, and victims and families are left without meaningful access to justice. This happens in large part because government institutions and decision-making processes so often leave out Indigenous peoples and our tribal governments when they make policy decisions that affect Indigenous women’s safety. When the Permanent Forum considers Goal 16 later this year, we will have another valuable space to speak out about these topics and to recommend what steps the United States should take to meet these targets.

The United Nations was established in 1945, and its Charter states that the institution was founded, in part, to “reaffirm faith in fundamental human rights, in the dignity and worth of the human person, in the equal rights of men and women…” The United Nations was created to respond to issues just like MMIW—violations of human rights, violations of women’s rights, government actions that deny the dignity and worth of every Indigenous woman. But institutions rarely act without pressure, so it is up to us to speak, to write, to advocate, to make sure that the UN lives up to its stated purpose.

Stay tuned for future details on how to attend the UN Permanent Forum on Indigenous Issues here: 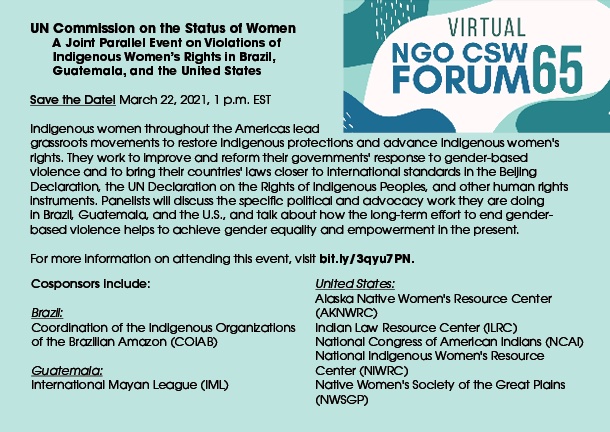