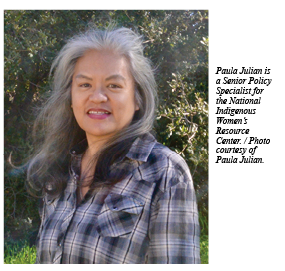 Authorization for the Family Violence Prevention and Services Act (FVPSA), which is the only federal grant program dedicated to domestic violence shelter and supportive services, expired in 2015.

Funding under FVPSA provides lifesaving support for shelters, state coalitions, training and technical assistance centers, children’s services, emergency response hotlines, and prevention initiatives. It is the primary source of funding for these purposes for Indian tribes.

After months of negotiation, on December 12, 2019, the Senate Health, Education, Labor, and Pensions (HELP) Committee passed S. 2971, a package of legislation inclusive of portions of S. 2259.

“While S. 2971 as passed by the HELP Committee makes slight improvements, S. 2259 and H.R. 5041 provide a better pathway for providing Native victims with the advocacy services so desperately needed,” said Lucy Simpson, Executive Director, NIWRC. “We will continue to advocate on the importance of moving this critically needed legislation forward, ensuring that it aligns more closely with the actual needs of victims to be served.”

According to a 2019 annual national survey of the National Network to End Domestic Violence, in just one day, domestic violence programs were unable to meet 11,336 requests from survivors, of which 68% were for housing and emergency shelter.

The 2020 Senate Resolution 36 that observed January as National Trafficking and Modern Slavery Prevention Month states: “...the Administration for Native Americans of the Department of Health and Human Services reports that American Indian, Alaska Native, and Pacific Islander women and girls have a heightened risk for sex trafficking.” The Hawaii State Commission on the Status of Women and Arizona State University released three reports from 2018 to 2020 titled “Sex Trafficking in Hawaii,” which found that 64% of survivors identified as being part Native Hawaiian.

Now is the time for Congress to appropriate the urgently needed funding for a Native Hawaiian Resource Center. Such a center acknowledges the federal trust responsibility to assist Native Hawaiians in safeguarding the lives of Native women who experience violence disproportionately. It will help to ensure that Native Hawaiian women have the opportunity to organize to address domestic and sexual violence.

Native survivors of domestic violence urgently need increased services, recognized by federal appropriators who increased appropriations from $175 in fiscal year 2020 to $182.5 million in fiscal year 2021, including an additional $7 million to increase FVPSA’s tribal set-aside. Our coalition welcomes the opportunity in the 117th Congress to work with our congressional champions to move FVPSA reauthorization forward with the enhancements, including fulfilling the federal trust responsibility and recognizing the role of tribal domestic violence coalitions, the StrongHearts Native Helpline (a national Indian domestic violence hotline), and the Alaska Native Women’s Resource Center. The national coalition will continue to work with the Senate and the House to introduce bills with the enhanced provisions in S. 2259 and H.R. 5041.

“We are thankful for the recognition of the unique role that tribal coalitions play in supporting tribes and tribal organizations to address domestic violence and look forward to ongoing negotiations to secure the tribal resources so badly needed,” said Dawn Stover, Executive Director, ATCEV.

FVPSA tribal enhancements include the following:

The national coalition does not support the straight reauthorization of FVPSA, S. 85, introduced by Senator Chuck Grassley (R-IA) in the last Congress, because it lacks increased support for survivors.

“Straight reauthorization falls short of our coalition’s call for improvements to the law,” said Lucy Simpson, NIWRC. “Given the impact of COVID-19 exacerbating the challenges facing victims, tribes, and tribal programs, the growing call of families and grassroots organizing against the injustice of missing and murdered Indian women, and resulting state and federal attention, the need for advocacy services for Native victims is urgent.” 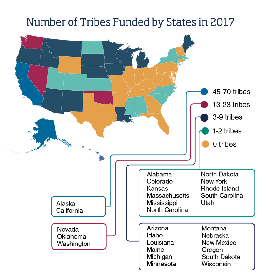 Funding Under the FVPSA 2021 Reauthorization Must Increase

While all federally recognized Indian tribes are eligible to apply for FVPSA funding, unfortunately the current funding level prevents funding all tribes. We applaud the FVPSA office for funding over 250 tribes and tribal organizations, yet this number must increase. Currently fewer than half of all federally recognized tribes receive FVPSA funding.

“Typically, the largest number of tribes funded are in Alaska and California (between 45 to 70 tribes), followed by Nevada, Oklahoma, and Washington (13 to 23 tribes). All other states have fewer than ten tribes funded through FVPSA. To meet the need for shelter, tribal programs contract with hotels, utilize safe homes, and access non-Native shelters outside of their villages, communities, and reservations.”2 Less than 60 tribal domestic violence shelters currently exist. FVPSA funding must increase to support additional Indian tribes to provide lifesaving shelter and services.

Forty-two years ago, in 1978, Tillie Black Bear provided testimony to the U.S. Commission on Civil Rights at a historic hearing titled “Battered Women: Issues of Public Policy” about the lack of shelters and support for victims. In 1984, because of the groundswell of advocacy from survivors like Tillie and other advocates, FVPSA became federal law. Given the increased grassroots and governmental support to address the injustice of missing and murdered Indigenous women (MMIW), we are long overdue for these enhancements to ensure that women have the shelter and supportive services they need to prevent abductions and homicides.