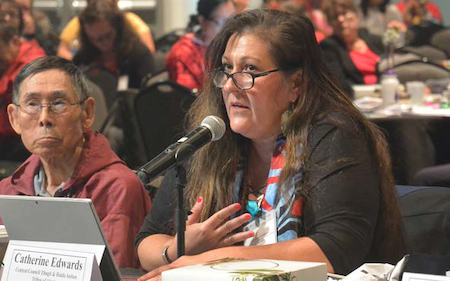 I am Catherine Edwards, the first Vice-President of the Central Council Tlingit and Haida Indian Tribes of Alaska. We represent 22 villages in Southeast Alaska and 3 urban populations in Anchorage, Alaska, California, and Washington, with more than 32,000 citizens. Thank you for the opportunity to provide comments on the Not Invisible Act––Gunalcheesh! I would like to say that I am honored to be here and honored to be a representative of my people. Though after many years of being involved with this work and testifying in various federal consultations each year, I continue to hope that someday we could stop repeating the same messages and requests.

I will respond to your questions, but before I do, I want to make a strong case to have significant representation from Alaska stakeholders. Far too often our situation is overlooked and misunderstood given the challenges that our communities face with the lack of law enforcement in many of our communities, the remote locations, extreme weather exacerbated by global warming and the extractive industries effects on our communities.

Our communities, both rural and urban, continue to lack basic services that would help to increase the safety for our women, children, and families. My goal in testifying again and again to federal agencies is to give voice to the voiceless and remind you that violence against women in our communities is in crisis. Each and every day, as these meetings are taking place, violence is happening to our families and our communities are suffering. It is my hope that you will listen, not just to our stories, but also think about what resources should be provided to us and then visit us, listen to us. We know what to do. We simply need help with resources and partnerships.

I am also the co-chair of the Tlingit and Haida Violence Against Women Task Force that was established in 2017. The Task Force is a community-driven response to end domestic violence and to address cases of missing Alaska Native women. It is charged with studying, analyzing, reporting, and providing recommendations on how to:

Why do we need such a group? Because the Federal government has and continues to fail the trust responsibility to our Tribal communities, especially in providing necessary resources to decrease violence and increase safety from domestic violence and sexual assault.

In the 1960’s my Grandmother’s sister, Auntie Butch was beaten, raped and, left in a ditch where my Uncle, 15 at the time, had to claim the body, and the local police wouldn’t do anything about it or help him, because she was Alaska Native. Two years ago, my daughter fled our homelands because of a stalker. When she attempted to seek help through the State court, the Judge not only allowed her stalker to question her, and denied her request for a protective order, saying she was simply too nice. All of this in spite of the fact that the perpetrator was in court just two months prior, also for stalking another woman––he is now running for School Board!

Alaska continues to rank in the top five in the rate of women murdered by men and we know this rate is higher for American Indian/Alaska Native women. We know that women killed by men are most often killed by someone they know, and more than half are killed by an intimate partner. Here we are in 2021 and we still have Native women beaten, raped, and left in ditches and law enforcement isn’t helping. In 50, 60 years we really haven’t come very far. We as Alaska Native women represent 50% of sexual violence and while American Indians are overrepresented in DV/SA, Alaska Natives are among the most victimized nationwide being victimized 2x the national average and in some areas even higher. They say 1 in 3 American Indian or Alaska Native women have experienced sexual assault and domestic violence. However, I have yet to sit in a group of my Tribal sisters and find the 2 out of 3 that have not been sexually assaulted or beaten. We really haven’t come very far.

We continue to remind the federal agencies, year after year, that in Alaska we do not have adequate law enforcement and lack the resources to remedy this situation on our own. In addition, we currently have a Governor who continues to cut law enforcement funds and support for the Tribes. Tlingit and Haida Tribe has run the Village Public Safety Officer program in Southeast Alaska, however, only has the funding to provide VPSO in a small number of our 22 communities. Due to the budget cuts and retention difficulties, a VPS officer is the only law enforcement presence, often on call 24/7 and not well paid. These officers also do not have arrest authority and are not allowed to carry firearms. This explains the low retention rates and recruitment difficulties.

The last fifteen months, with the COVID-19 Pandemic, we have seen conditions and safety in our villages drastically worsen. Lack of adequate housing, an issue before COVID, has forced victims and children to remain in the homes of their abusers. Many of the rural villages throughout Alaska thus do not have shelters or safe houses that can provide refuge and safety. The lack of sufficient funding for preventive services and resources prevents our communities from teaching how to live in safety and unlearn violence. Safety, wellness and eliminating violence for our tribal communities and citizens continues to be our top priority.

Also, do not forget about the Department of Justice State of Emergency in Rural Alaska Declaration.  On June 28, 2019, DOJ stated an emergency in rural Alaska existed and provided some resources—primarily to the state to back-fill the state cuts. We need on-going support and assistance to build the necessary infrastructure to address the dire jurisdictional issues that are truly health, safety and welfare issues and such assistance is required by the federal trust responsibility.

Again, Alaska is often overlooked or misunderstood about the extreme conditions that many of our communities face and we need strong VOICES, not VOICE, but VOICES at the table.

We believe the NIA Commission should review and adopt these recommendations:

Now to answer your questions:

Gunalchéesh––Háwʼaa––Thank you for taking the time to listen to our concerns; and we will be submitting written comments.