In 1978, Matilda Black Bear emerged as the first Native woman to advocate for battered Indian women at the national level. She continued in the movement for safety until her passage in 2014. Known to the movement as “Tillie,” she was well recognized as the Unci (Grandmother) of the Battered Women’s Movement for her leadership spanning almost four decades. Her handprints rest on historic national legislation and the founding of organizations to advance safety for women and a national agenda for strengthening Indian nations' sovereignty.

“The NIWRC honors Tillie as one of our founding mothers and as a grandmother of the battered women's movement,” said Cherrah Giles, Board Chairwoman, NIWRC. “Unci Tillie provided leadership for more than four decades and at key moments of our struggle for safety and sovereignty.”

The struggle to end violence against Native women runs parallel to the colonization of hundreds of Tribal Nations in the United States. While all Indian Nations suffered the inhuman brutality of federal law and policies, each nation has a specific history of how colonization altered the lives and safety of women.

"At night, as young children, we kept watch for government agents so we could warn our families doing a sweat, purification. It was a crime to speak our language, practice our ceremonies, and be who we are as Indian people."—Tillie Black Bear

A citizen of the Rosebud Sioux Indian Tribe, Tillie believed in the teachings of White Buffalo Calf Woman. One of the first teachings White Buffalo Calf Woman brought to the Lakota people was that “even in thought, women are to be respected.” Tillie was given the Lakota name Wa Wokiye Win, which means “woman who helps everyone” in English, a name she fulfilled in life.

A part of the legacy of U.S. colonization is the cultural genocide committed against Indigenous peoples. For the movement to increase safety for Native women, it is reflected in the erasing of the leadership roles of Native women, their names, struggles, and victories. The public honoring of historic personalities shapes who we, as a society, uphold as cultural icons.

“The erasure of Indigenous women from the public eye is part of the continuum of dehumanizing Native women,” said Lucy Simpson, Executive Director, NIWRC. “NIWRC, as an organization, is committed to unraveling the cultural foundations of violence against Native women. Telling our story is part of decolonizing.”

The federal laws and policies preventing the full protection of Native women continue to legally justify the failed response of the government, but the social normalization of such violence is culturally based. The lack of public acknowledgment of the heroines that defended their nations, the grandmothers who stood against the criminalization of those ways of being a Native woman, must be challenged by inclusion and speaking our truth.

“Unci Tillie’s understanding of social change, organizing, movement building, and making relatives are her living legacy. We honor her life and our movement by celebrating Women Are Sacred Day on the first day of the October Domestic Violence Awareness Month.”—Lucy Simpson, Executive Director, NIWRC. 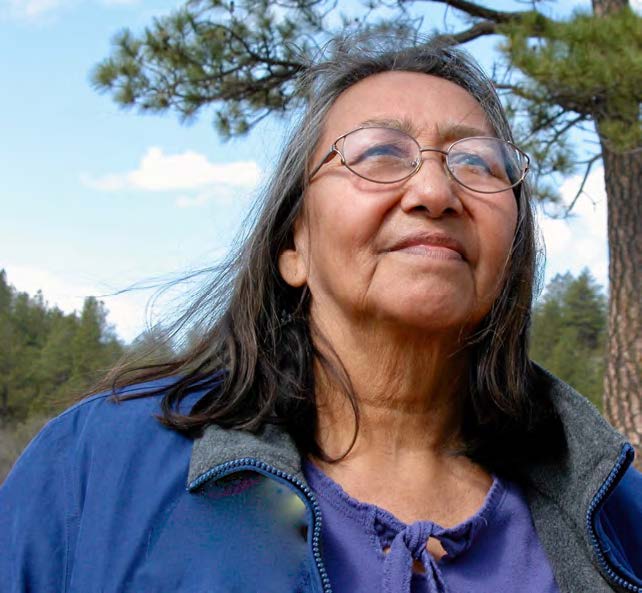 "Looking back over three decades, having spent most of my life as a woman in our resistance movement, I am so proud of our women who went beyond the shelters’ doors. As tribal women, as Indigenous women, we are helping to create a safer, more humane world."

As we celebrate Domestic Violence Awareness Month, NIWRC is honored to share a two-part interview of Unci Tillie Black Bear on our movement’s history to restore safety for Native women. Unci Tillie shares her inspirational story of grassroots organizing in the late 70s to form the White Buffalo Calf Woman Society Shelter on the Rosebud Sioux Reservation, the South Dakota Coalition Against Domestic Violence, and the National Coalition Against Domestic Violence. Unci Tillie discusses how the local organizing at the Rosebud Sioux Tribe’s was anchored by the teachings of the White Buffalo Calf Woman, the ways of the čhaŋnúŋpa  (cha-nu-pa), and seven sacred ceremonies. This history of our movement and these Tribal teachings hold increased significance in light of the struggle to develop tribally-based services for Native women. Listen to Speaking Our Truth, Podcast for Change: