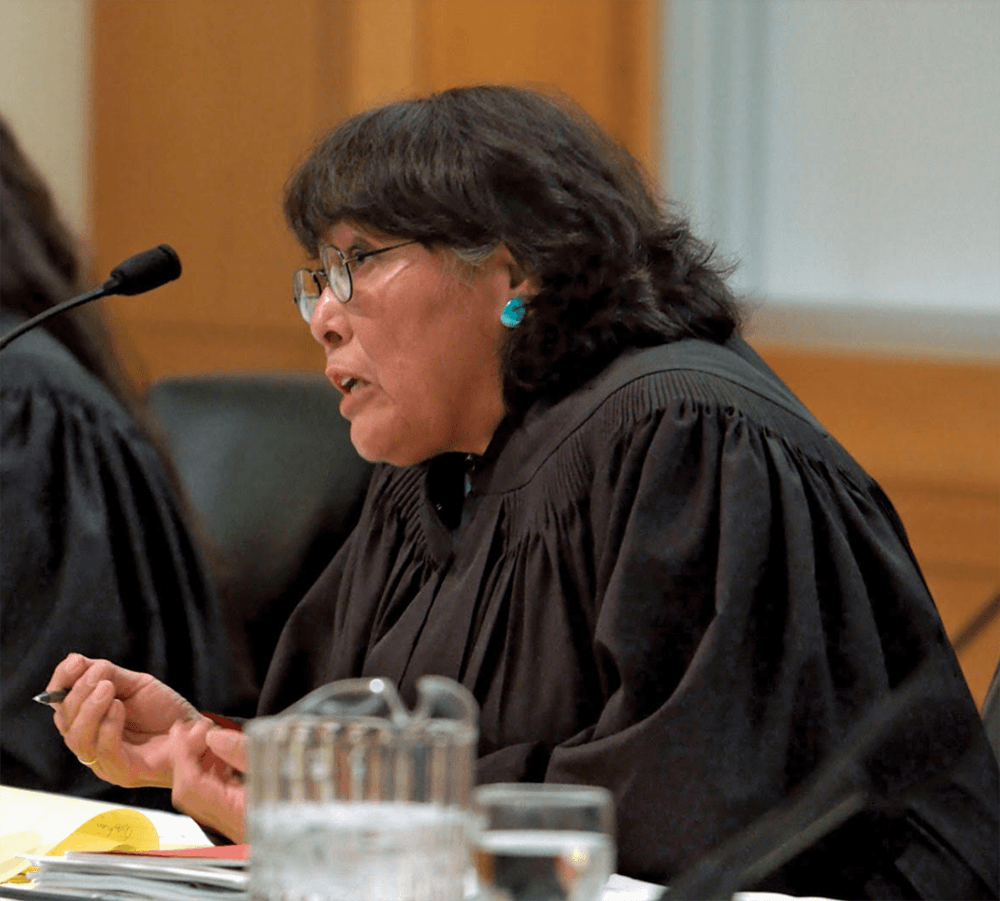 Lorene Ann Bennett Ferguson, wife, mother, grandmother, and matriarch for her family, age 77, passed away peacefully, with her daughters at her side, on Monday, March 1, 2021 at UNM Hospital in Albuquerque, NM. She was born on December 8, 1943 in Fort Defiance, Arizona into the Hashtł'ishnii (Mud clan) and born for Ta'neeszahnii (Tangle clan). Her parents were Ralph Bennett, Sr. and Mabel (Smith) Bennett. Lorene was raised in her early years by her Grandmother Bah Tsosie in a traditional hogan in Sawmill, Arizona. As a child, she helped her Grandma in the cornfields and herding sheep. She spent many an hour entertaining herself by playing “teacher” and reading to her “students”– the sheep.

As the mother of National Indigenous Women’s Resource Center (NIWRC) Executive Director Lucy Simpson, and as a retired Navajo Nation Supreme Court Justice, our staff and board honors Justice Ferguson’s life and contributions to the tribal justice system. She was a mentor to countless law clerks and attorneys throughout her career, and a strong advocate for education and traditional law.

She graduated from Window Rock High School in 1961 and went on to attend Fort Lewis College in Durango, Colorado, graduating in 1965 with a major in English Literature and a minor in Psychology. Shortly thereafter she met her future husband Dr. Bruce Ferguson while he was working at the Fort Defiance Indian Hospital. Together, they raised two daughters, Dawn and Lucy, and all the while, Lorene helped ingrain a love for family and learning in her children. In preparation for road trips, she often stayed up late into the night for weeks in advance to record herself reading books into a tape recorder to play for the kids while driving. (The Navajo original version of books on tape.) At the time, Dawn and Lucy often dreaded being forced to listen to the tapes, but as they matured, they know that their love of books and learning was a direct result of her efforts, and the knowledge from those books is still something they draw on in their lives to this day.

After graduating from Fort Lewis College, Lorene spent many years working in Navajo community development, welfare rights and as an educator. Not many people know that she was also an entrepreneur. In the 1970s, she owned and ran the Bison-Tentative, a coffee shop (before they were trendy) in the University District of Albuquerque, offering coffee, food and live music. In 1980, Lorene decided to go to law school and was accepted to the University of New Mexico School of Law, graduating in 1983. She went on to have an accomplished legal career, eventually becoming the first woman Associate Justice on the Navajo Nation Supreme Court, from which she retired in 2007.

Lorene and Bruce traveled all over with the girls, but their favorite family activities were camping in the Jemez Mountains, family river rafting, and trips to the beach. As the girls grew older, Lorene jumped headfirst into the role of beloved “Auntie” to her nieces and nephews. In particular, she and Bruce opened up their home and especially their hearts to her younger brother Ben’s children, taking them on many of the same family adventures of earlier years.

Lorene had a special love for her three granddaughters and one grandson, as well as all the family babies, and they in return adored her. All of her grandchildren and her many nieces and nephews, as well as their children, agree that she was an absolutely amazing Grandma and Auntie. Despite her trailblazing legal and professional accomplishments, she never stopped making up silly songs and games to play with the babies, and she was particularly proud of their many accomplishments as they grew up.