Statements and Recommendations By Tribal Governments are Essential

Congress amended the Violence Against Women Act (VAWA) in 2005 to include a tribal title by which it requires an annual consultation to be organized by the USDOJ and Indian tribes dedicated to addressing violence against Indian women.

“Under the consultation mandate, the federal departments–Departments of Justice, Health and Human Services, and Interior–must each consult annually with Indian nations on issues concerning the safety of Indian women. To continue to increase protections for Native women, Indian nations need to continuously identify the roadblocks and solutions that will allow us as governments to protect women.”—Juana Majel, Co- Chair, NCAI Task Force on Violence Against Women

The annual consultation mandated by VAWA between the United States and Indian nations as governments is, on the highest level, a discussion of the legal, policy, and administrative issues essential to safeguard the lives of Indian women and the successful implementation of VAWA as governments. This nation-to-nation interaction provides an avenue for tribal governments and the United States to discuss matters that at the broadest level impact the safety of Indian women. It provides an opportunity to examine and address important issues that impact all Indian nations in providing safety for women.

Based on the various concerns identified from the consultations (2006-2012), Congress strengthened the consultation mandate when it reauthorized VAWA in 2013. These amendments addressed concerns from tribal leaders about the consultation process, allowing for mutual dialogue as governments regarding the legal and policy roadblocks to the safety of Native women.

The VAWA 2013 amendment to the consultation provision mandated the Department of Interior to attend and the Attorney General to submit to Congress a report detailing the tribal recommendations made during the consultation and the progress made in addressing tribal concerns. A copy of the 2020 Government-to-Government Violence Against Women Tribal Consultation Annual Report and past reports are available on the website of the Department of Justice’s Office on Violence Against Women (OVW) at www.justice.gov/ovw/tribal-consultation.

Tribal Preparation: the Essential Link for Annual Consultation on Violence Against Women

In preparation for each of the annual consultations, the NCAI Task Force has assisted Indian tribes in preparing for the consultation. The Task Force organizes a national webinar to summarize key national concerns and emerging issues for tribal leaders to consider in their preparation. During the webinar, tribal leaders and representatives receive a briefing of priority issues, specific tribal concerns and recommendations for the consultation. The webinar is scheduled for July 21, 2021. 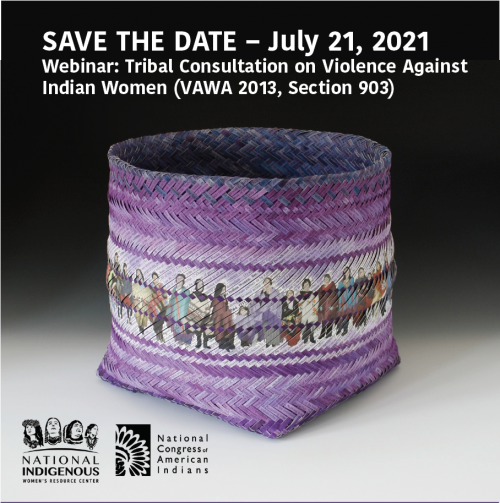 This webinar is made possible by Grant Number 90EV0452 from the Administration of Children, Youth and Families, Family and Youth Services Bureau, U.S. Department of Health and Human Services.