Running is in her blood.

A runner for the past 23 years, Jordan Marie Brings Three White Horses Daniel, a member of the Lower Brule Sioux Tribe, is a fourth-generation runner. She said she’s known since the eighth grade that she wanted to work for our people and give back to our communities and dreamed of living in Washington, D.C. in pursuit of the work.

In May, the National Indigenous Women’s Resource Center received a substantial donation from Jordan, who held a virtual run fundraiser on  Twitter and Instagram in support of the May 5th National Day of Awareness for Missing and Murdered Native Women and Girls.

A strong grassroots advocate, Daniel is continually living out her childhood dream, having served in various roles at the National Indian Health Board, the Administration for Native Americans, and interning with Congresswoman Chellie Pingree (D-Maine) in Washington, D.C. Fast track a few years into her work, she had her first taste of activism when she began attending rallies in protest of the Keystone XL pipeline in Washington, D.C.

“I really looked up to the Native people who would come to D.C. to organize,” Daniel said. “But after seeing the dog attacks on the Standing Rock youth– relatives to me who were being hurt, that’s when I said, ‘enough is enough,’ and I started organizing more and showing up at the White House and Army Corps of Engineer with my sign.”

During this time, she began noticing several non-Native groups and organizations protest against the pipeline in support of Indigenous people, but she didn’t always see Native speakers represented or land acknowledgments taking place at their protests and events.

“D.C. has such a beautiful Native community and who show up for each other, but it didn’t seem like protests were that inclusive of us and what we’re fighting for,” Daniel said. “After spending time pushing for that, my last year living there really changed as soon as I knew I wanted to be a better organizer and be a better relative for our people and our next generations.” 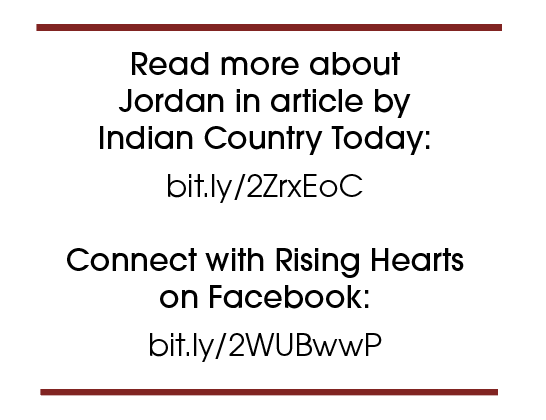 Her activism work evolved into the created a platform called Rising Hearts, a grassroots group devoted to uplifting the people and defending Indigenous rights by organizing with groups for awareness. Now living in Los Angeles and working at the University of California - Los Angeles as an Outreach & Project Manager, Daniels’ advocacy with Rising Hearts involves speaking out for the #MeToo movement to be more inclusive of missing and murdered Native women and girls. She said Native voices need to be heard across all sectors of society, from mainstream movements on up through the federal government.

“The responsibility of advocating for our communities lies so heavy on all of us, so what we’re trying to create is a space that includes allyship to help elevate awareness and help alleviate some of that weight so it doesn’t seem so heavy for us,” Daniel said. “That’s what I’m really trying to work hard towards — to bring allies and make sure that they’re getting the proper knowledge and education by directing them to Indigenous experts and resources. It can’t be just us doing this work. I think we’ll have the change we’re hoping for if we change the system and everyone is a part of that system.”