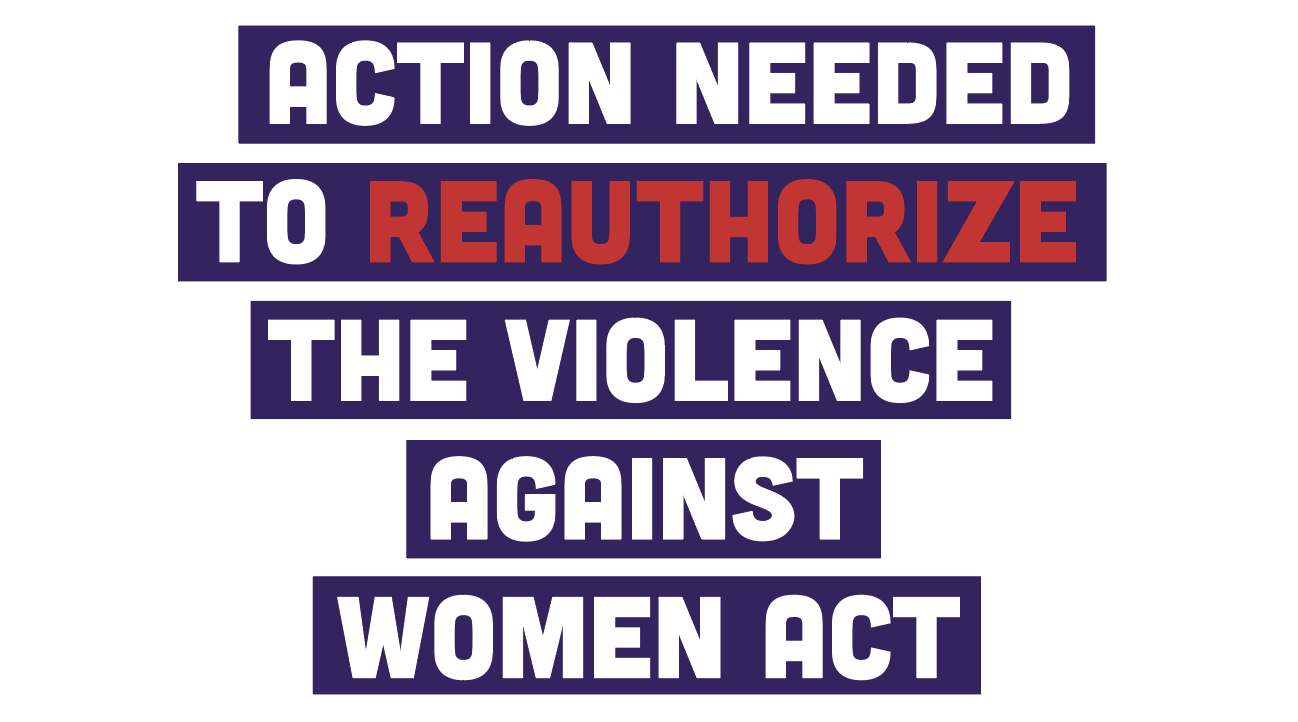 Action Needed to reauthorize the Violence Against Women Act

The Violence Against Women Act (VAWA) became the law of the land in 1995. Over the past 25 years, VAWA has grown into a historic Act reshaping the laws, policies, and responses of federal, tribal, and state governments. While the legal reforms of VAWA continue the grant provisions of VAWA expired in December of 2018 and must be reauthorized. The struggle for VAWA reauthorization is complicated and challenging reflecting the very real difference in the view of safety for Native women and safety for other populations in the United States.

As Indian tribes, the country, and peoples around the world struggle to survive and organize in response to the COVID-19 virus, the reality of domestic violence victims under social distancing restrictions is of grave concern. Specifically, the concern for how the 24-7 confinement to a living space with an abuser complicates an already dangerous setting—the potential for ongoing threats, physical abuse, and murder.  This setting is even more dangerous if the local government where you live has no authority over the abuser highlighting the urgent need for the VAWA tribal amendments contained in H.R. 1585.

“Justice in America is racialized. Indian tribes are the only governments in America without jurisdiction to protect women from violence due to the race of the abuser. We must have full authority on our lands to protect victims of abuse from non-Indians,” said Juana Majel-Dixon, Co-Chair of the NCAI Task Force on Violence Against Women. “The COVID-19 crisis has spotlighted why VAWA must be reauthorized this year to change this reality.”

The position of the NCAI Task Force is that the Senate version of the Violence Against Women Reauthorization Act must address this jurisdictional gap with local solutions that will deliver long-overdue justice to Native women and safety to tribal communities. Senate Bill 2843 is a companion bill to and mirrors the tribal provisions of H.R. 1585, specifically amendments to protect children and elders; victims of sexual violence, stalking, sex trafficking; obstruction of justice; and assaults against law enforcement and corrections personnel.

In 2013, the movement won a historic but limited victory in the return of jurisdiction to Indian tribes over non-Indians committing domestic violence. While many said this would “never happen” tribal women who were survivors of such violence understood the dangers perpetrated by non-Indians and stepped forward to testify at Congressional hearings, speak to the media, and share their stories where needed. The groundswell that led to the 2013 victory must continue to grow in 2020 to create these needed changes. The final VAWA bill should restore tribal criminal jurisdiction over non-Indians to respond to and prevent the pattern of domestic violence crimes that threatens the lives of Native women daily.

“Women and men, Senators and Representatives from all backgrounds, and tribal leaders from across Indian Country have all spoken that these injustices cannot continue,” Majel-Dixon said. “Normalization—social tolerance—of violence against Native women is intertwined with these antiquated racialized federal laws.”

VAWA has expanded its reach over the decades to more fully include support for Indian tribes to address domestic violence, sexual assault, dating violence, stalking, and sex trafficking. The 2013 VAWA amendments demonstrate an increasing awareness of the legal barriers to address violence against Native women and the essential role of tribal governments in the full implementation of VAWA. In 2020, these legal disparities in protections for Native women must be corrected. Justice cannot continue to be based on antiquated federal laws from the 1800s.

“For each reauthorization, NIWRC has joined with the NCAI Task Force, tribal leaders, and the grassroots advocacy movement for Native women to partner with Congressional champions,” said Lucy Simpson, Executive Director of NIWRC. “This national alliance has secured legal protections and increased resources for Indian tribes to protect and support Native women, and we must do so again in 2020.”

Congress, in 2013, unfortunately, limited the return of tribal jurisdiction over non-Indians to only three domestic violence crimes—domestic violence, dating violence, and violation of an order of protection. In March 2018, NCAI released a Five-Year Report on VAWA 2013’s Special Domestic Violence Criminal Jurisdiction (SDVCJ). This report summarizes the implementation of VAWA 2013’s tribal jurisdiction over non-Indians. It analyzes the impact of special domestic violence jurisdiction during the first five years of enactment. The report is a strong statement that VAWA 2013 has been successful in holding criminals accountable and protecting Native women. It is also a statement of the tremendous void that Congress allows to continue by non-Natives who are committing sexual assault, trafficking, and crimes against children and justice personnel responding to domestic violence.

Indian tribes implementing SDVCJ report many of the offenders prosecuted had a significant number of tribal police contacts prior to implementation and had been menacing their victims and straining the tribes’ law enforcement resources. The Tulalip Tribes, for example, has reported that their 17 SDVCJ defendants had a total of 171 contacts with tribal police in the years prior to SDVCJ implementation and their ultimate arrests. The implementing tribes reported the 85 defendants accounted for 378 prior contacts with tribal police before their tribe implemented special domestic violence criminal jurisdiction over non-Indians.

The Tulalip Indian Tribes shared one case example of a non-Indian defendant with 19 prior contacts with tribal police. The case involved an Indian woman who was assaulted and raped by the non-Indian father of her children. The couple’s 8-year

old son disclosed in his statement to police that he was “punched in the face” by his father. This incident, the latest in a long history of abuse, resulted in charges of Assault in the First Degree Domestic Violence and Rape Domestic Violence, but the defendant was not immediately apprehended. Based on the conduct alleged, the victim petitioned for a protection order, which was granted. Prior to defendant’s arraignment on the violent crimes, he was served with, and twice violated, the protection order. At the scene of these violations, the defendant was taken into custody. The defendant had nineteen contacts with Tulalip Police prior to these incidents. However, after the implementation of SDVCJ, the defendant was finally held accountable for his crimes.

This is but one of many examples of the success of the return of tribal jurisdiction over non-Indian abusers. The VAWA 2013 amendment has made a tremendous difference in the lives of victims of domestic violence. “Before VAWA, tribal police could only give an abuse victim “a head start” to flee the scene. In 2014, a non-Indian man attacked his Indian wife in a public parking lot of a gas station. During the assault in the car, he also bit her. When she ran out of the car and rushed into a women’s restroom to seek shelter, he followed her and continued to assault her. The police were called, and tribal and state officers arrived at the scene. In any other case, the man would have been arrested and charged. However, because the assault took place on the Sisseton-Wahpeton Oyate reservation and the defendant was a non-Indian, only the federal government had jurisdiction. So, the tribal and state police who responded did the best they could do. They held the man in custody and painfully told the woman all they could do is try to “give her a head start.” The Sisseton-Wahpeton Indian Tribe is now implementing SDVCJ. Still, for many reasons, such as the lack of resources, the vast major of other Indian tribes are not.

Why Tribal Jurisdiction Under VAWA Must be Expanded in 2020

Passed by the House of Representatives, the VAWA Reauthorization Act, H.R. 1585, includes the expansion of tribal jurisdiction over non-Indians based on the needs of victims, including specific crimes involving children and elders, sexual violence, stalking, sex trafficking, obstruction of justice, and assaults against law enforcement and corrections personnel.

Unfortunately, the U.S. Senate has yet to pass a companion bill to reauthorize VAWA. The current lack of tribal jurisdiction over non-Indian offenders emboldens criminals because they face no consequences for violent crimes committed on tribal lands. If Congress continues to stall and show their lack of concern about the safety and well-being of Native women and children, they fail to fully understand that allowing criminals to commit crimes with impunity only raises the threat to all women and children.

There are many examples of how the narrow restrictions of the VAWA 2013 SDVCJ limit the protection tribal law can provide victims of domestic violence, sexual assault, trafficking, and other crimes. In the following case reported in the NCAI Five-Year Report, a child sexual predator who evaded tribal prosecution was subsequently arrested by the county for raping a young girl.

A non-Native man with criminal convictions moved to the Sault Ste. Marie Reservation and began an intimate relationship with a tribal member. He then began making unwanted sexual advances on his girlfriend’s 16-year-old daughter. He sent inappropriate texts to the daughter and would stand outside the windows of their home. On one occasion he groped the daughter and then told her she could not tell anyone about it. The tribe charged the defendant with domestic abuse, attempting to characterize his actions toward the daughter as tied to the relationship with the mother and thus within special domestic violence jurisdiction of the tribe, but the tribal judge dismissed the case as beyond the tribal court’s jurisdiction.

Four months later, he was arrested and charged by city police with three counts of criminal sexual conduct, one count of attempted criminal sexual conduct, one count of child sexually abusive activity, one count of using a computer to commit a crime, and one count of using a computer network to commit a crime. The alleged incident involved a barely 14-year-old girl who was a tribal member and resided on the Sault Ste. Marie Reservation. The defendant allegedly contacted her online and then kidnapped and held her in an off-reservation motel, repeatedly raping her over the course of 12 hours.

“Had our tribe had jurisdiction to maintain court authority over the alleged non-Native perpetrator for the first incident, this second act of violence may have been prevented. This child’s life will never be the same.”—Jami Moran, Director of the Sault Ste. Marie Tribe of Chippewa Indians Advocacy Resource Center

VAWA’s Support for Safety and Sovereignty Since 1995 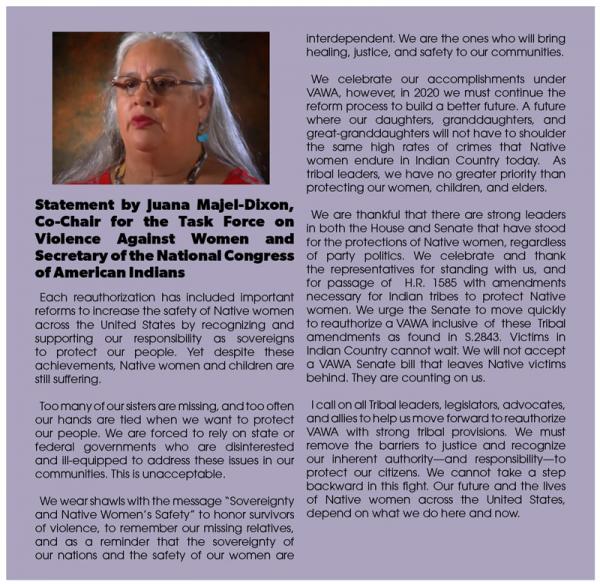 The Violence Against Women Act was originally enacted in 1994 and became law January 1, 1995. The VAWA has been reauthorized three times: 2000, 2005, and 2013. With each reauthorization of VAWA, the national movement has achieved significant victories in support of tribal authority and resources needed to increase the safety of Native women. These legislative victories include the following highlights: