“For more than five hundred years, Native communities across the Americas have demonstrated resilience and resistance in the face of violent efforts to separate them from their land, culture, and each other. They remain at the forefront of movements to protect Mother Earth and the life it sustains. Today, corporate greed and federal policy push agendas to extract wealth from the earth, degrading sacred land in blatant disregard of treaty rights. Acknowledgment is a critical public intervention, a necessary step toward honoring Native communities and enacting the much larger project of decolonization and reconciliation.”

To ceremoniously venerate a Tribe’s sacred ties to their ancestral homelands is not only about setting a respectful framework but is also about honoring the centrality of relationships and protocol within tribal nations. It’s a step forward in honoring the first peoples, including their history, treaties, and recognition as sovereign nations with the call to strengthen sovereignty. It further acknowledges a tribe’s unique worldview as expressed through familial and kinship systems, ceremonies, and core values that revere elders, women, men, and children.

As Indigenous people, we understand the symbiotic relationship between women and mother earth. In educating about these sacred, spiritual connections, we encourage our partners to adopt acknowledgment protocols including the importance of affirming respect for Native women. One might ask what land acknowledgment has to do with restoring respect for Indigenous women?

Sacred Women, Water, and Land
Each Indian Tribe has its own creation story often fused with lessons about Indigenous ways of knowing, being and living including spiritual practices, customary laws, protocols, ceremonies, and nurturing spiritual relationships among all creation. These creation stories weave land and lessons and the importance of kinship systems respecting all relations, especially women.

The starting point for many creation stories are matrilineal and acknowledge the fundamental sacredness of women within Tribal societies. In creation stories, it is often the woman who created life through birthing children, or through creating earth from their bodies, from which plants and animals emerged.  Her life-blood represents sacred womanhood along with many gifts, namely her strength, wisdom, influence, authority, autonomy, power, and gift of being a life-bearer.

Beyond creation stories, Native women historically have been highly revered within tribal societies. The importance of honoring women, kinship, and familial ties including the relationship to land and waterways, viewed as life-giving forces were deserving of the highest respect. To be sure, Indigenous women, in particular, share a sacred connection with the spirit of the land (mother earth) but also of water (carrying babies in water). Through an Indigenous lens, our waterways, mother earth and women are all viewed as life-givers, are all interrelated, and therefore rest on the principle of sacredness. 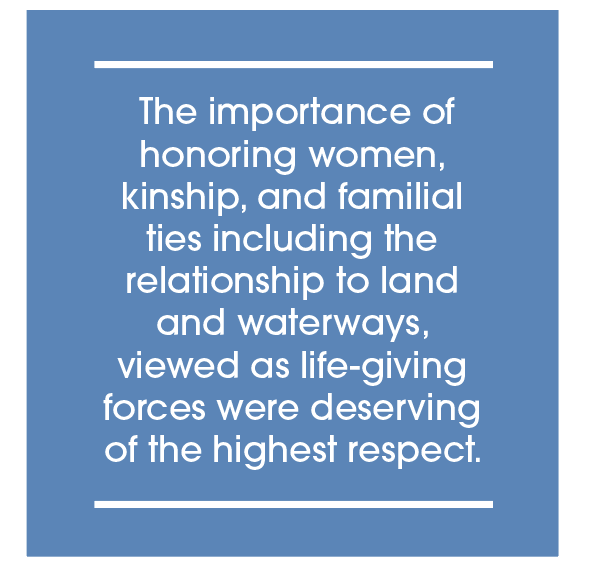 Colonization and Dehumanization
As history would unfold with contact and colonization, a radical disruption took place within tribal societies with colonizers imposing patriarchy and paternalism designed to unravel matrilineal systems and diminish the sacredness of women.  The steady decline of authority for Native women, including their political, social, and economic power, was destructive not only for them but also for tribal nations. Because tribes were forced to dismantle or modify their tribal systems of governance – this disruption caused a breakdown of customary law and tribal ways of life that safeguarded Native women from acts of violence.

“It’s about how genocide and colonization were based on the violent thought that land and bodies could be owned and consumed.” Government officials and settlers seized lands and Native women by war and violence. Native women, once revered, would be forcibly catapulted into a horrific path of dehumanization with ensuing acts of government sanctioned violence and genocide including rape and murder, still largely felt and seen today throughout the country.

A Movement of Resistance to Violence
As a way to lead efforts to create safety and ensure justice for Native women, a growing movement of resistance made up of long-time grassroots advocates began the journey of reclaiming the traditional status of women.  The movement, in their wisdom strategized to reform the federal laws, policies, and systems that have failed Native women. Fortified with vision and clarity, the movement centered their indigenous worldview, upholding the sanctity of women, and organized for action to enhance the safety of Native women.

In her infinite wisdom, Tillie Black Bear imparted that “even in thought, women are sacred.” She further reminded us that “as tribal women and allies that the commitment to bring safety and justice and restore the sacredness of women has only begun; the sovereignty of women has always been sacred.” As the movement continues to grow and educate about how violence is linked to colonization of our nations, lands, and peoples; we are beginning to observe a shift with partners and agencies and their acknowledgment of tribes, treaty rights, the foundation of disparities, and historical account of violence against Native women. 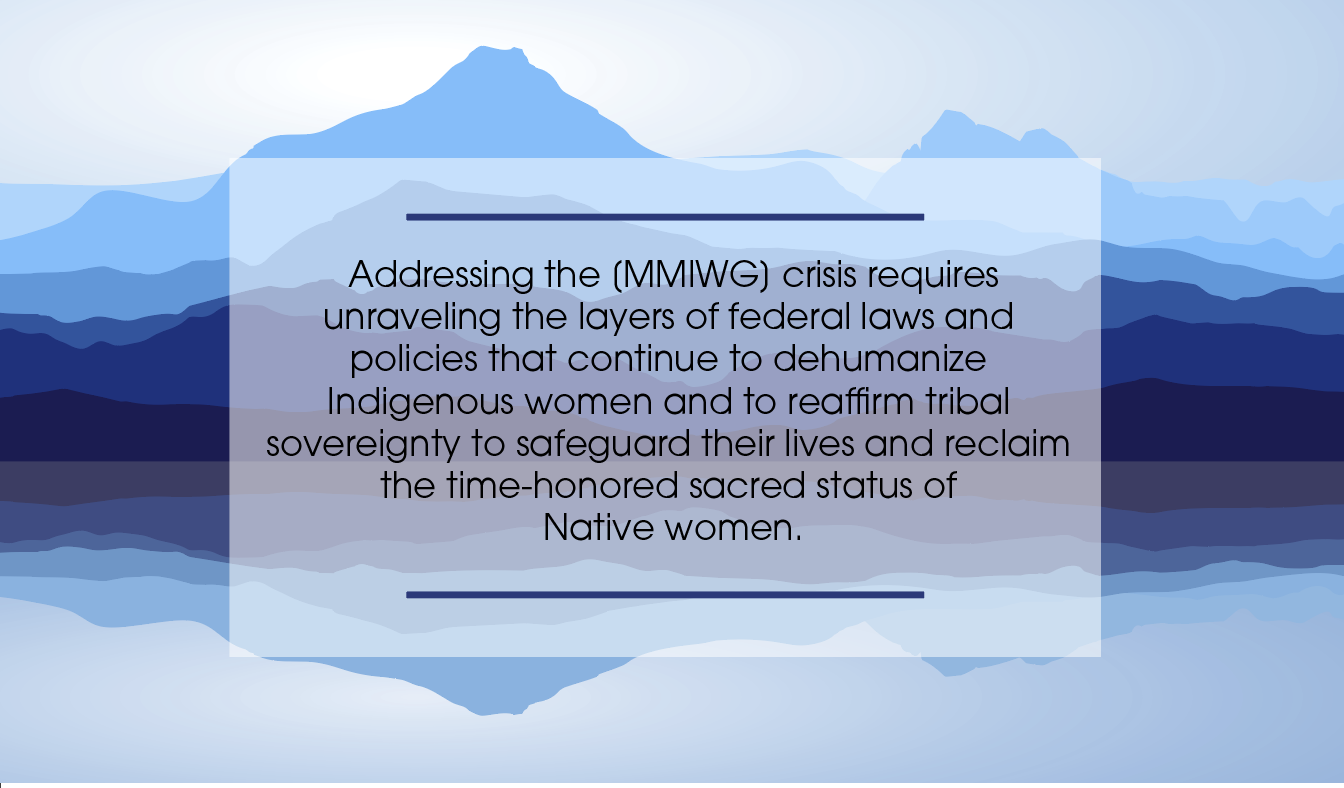 Recognizing, Affirming, and Honoring Indigenous Peoples
In the United States, land acknowledgment appears to be gaining traction in certain circles, however, many countries are far ahead of the U.S. in offering acknowledgment, truth, healing, and reconciliation. Australia, New Zealand, and Canada have enacted important protocols that respect their local Indigenous people and affirm the place of Tribal peoples among their societies. These countries share a common history with the U.S. in their colonial policies towards Indigenous peoples such as government land theft, mandated boarding schools, punishment for speaking a person’s Indigenous language, and outlawing Indigenous spirituality.

The current crisis of missing and murdered Indigenous women is one part of the broad spectrum of violence socially accepted and justified since early contact and further bolstered by acts of Congress, Supreme Court cases, and Presidential orders. Addressing this crisis requires unraveling the layers of federal laws and policies that continue to dehumanize Indigenous women and to reaffirm tribal sovereignty to safeguard their lives and reclaim the time-honored sacred status of Native women.

Land acknowledgment at the beginning of every gathering could signal one step forward in the long process of recognizing this history. Should the custom become widely accepted within the U.S., land acknowledgment offered in a conciliatory way may move the process forward and invoke respect for Indian tribes including the sacred status and respect for Native women.

By taking the first step toward land acknowledgment, there lies a responsibility and commitment towards building trust and laying the groundwork for long-term restoration efforts, including the support for self-determination and sovereignty of tribes as well as safety for Native women and other areas of injustice. This process with Indigenous peoples will require hard work and an ongoing commitment. Moreover, the practice of acknowledgment must be authentic otherwise the gesture may be viewed as disingenuous, with any future pronouncements seen as “symbolic acknowledgment” serving no reconciliatory purpose.

It is in the spirit of sacred connectedness and relationships that Native people endure and have survived. Weaving our creation stories with the sacredness of Native women and ancestral homelands is a way of honoring spaces and interconnectedness. Such connections impart the importance that all creation is related and dependent on everything in creation for their existence.  We must continue to elevate our sacred ways and they must be acknowledged and honored. We must continue reclaiming the sanctity of Indigenous women who have breathed life into our very existence.