Tribal coalitions exist throughout Indian Country, providing training, technical assistance, and support to Tribal governments and victim services providers. Currently there are 19 Tribal coalitions working to enhance the response to violence against women at the Tribal, federal, and state levels. In 2020, the Alliance of Tribal Coalitions to End Violence (ATCEV) received an award through the Office on Violence Against Women (OVW) to provide training and technical assistance to its member Tribal coalition programs, and to advance Tribal sovereignty and safety of American Indian and Alaska Native women by providing support to Tribal communities in their efforts to center local, Tribal responses to violence against Native women.

“NIWRC is delighted ATCEV is the new technical assistance provider for the tribal coalitions,” said Lucy Simpson, Executive Director for NIWRC. “We look forward to partnering with ATCEV to continue to support the tribal coalitions in their local and regional efforts, and continue building our movement nationally and internationally.”

“We were so excited to hear that Dawn Stover was named the first Executive Director of ATCEV,” said Paula Julian, Senior Policy Specialist, NIWRC. “As the former director of the Native Alliance Against Violence (NAAV), Oklahoma’s Tribal coalition against domestic violence and sexual assault, Dawn understands the essential role tribal coalitions play including the challenges to advocate for strengthening Tribal sovereignty to increase women’s safety.”

Tribal coalitions strive to offer the best services possible to support Tribal programs and individuals that provide direct services to victims of domestic violence and sexual violence. They know the most difficult and valued work in domestic violence and sexual violence advocacy is done at the ground level. When Tribal programs succeed, victims are being served and Tribal communities are being supported in speaking out against and responding to violence against women. 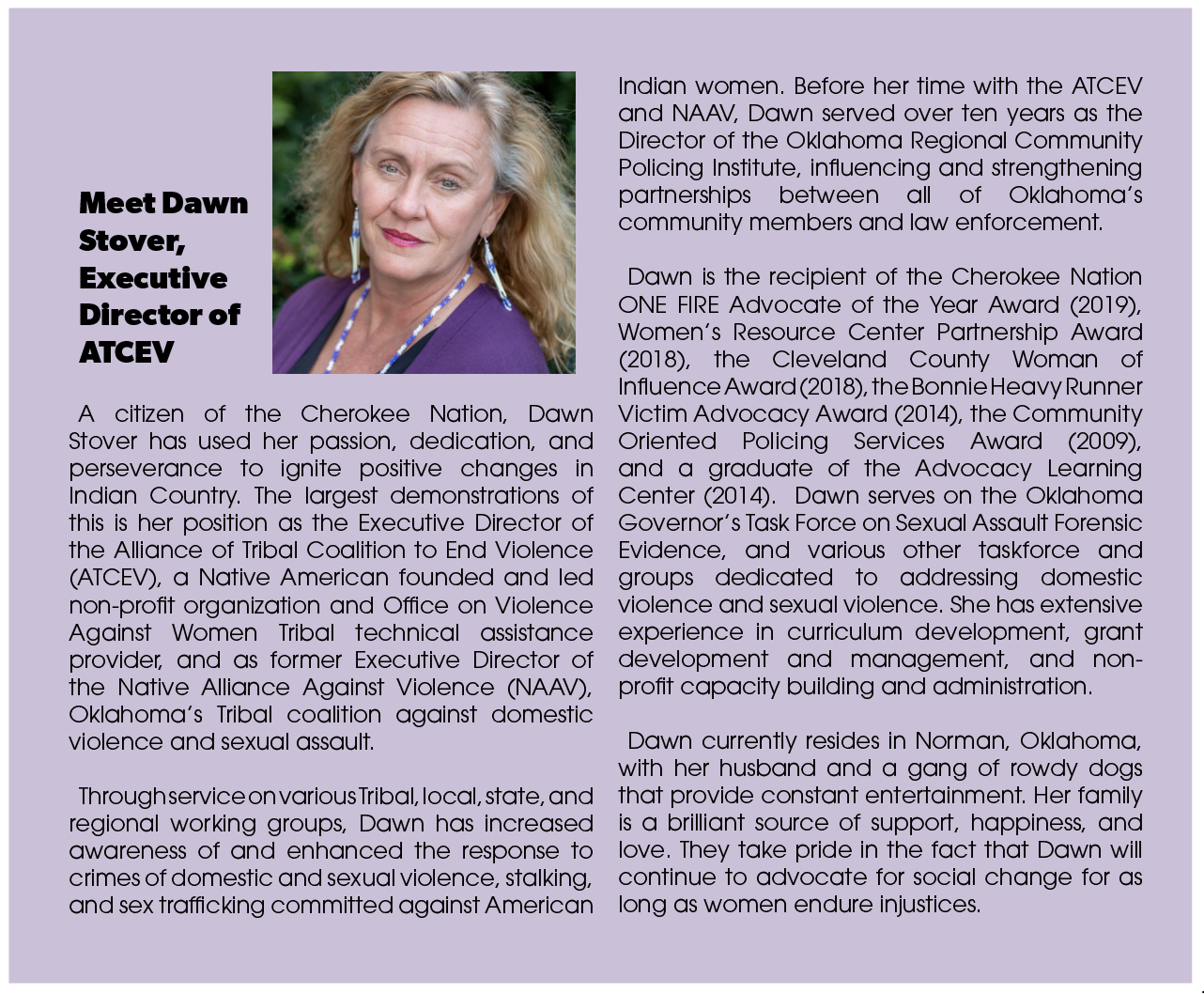 Grants under the program support the Tribal coalitions in their efforts to increase awareness of domestic violence, sexual assault, and sex trafficking against American Indian and Alaska Native women and enhance the response to violence against women at the tribal, federal, and state levels. Tribal coalitions provide education, support, and technical assistance to member Indian service providers and Tribes to enhance their responses to victims of domestic violence, dating violence, sexual assault, and stalking.

“The National Indigenous Women’s Resource Center previously served as the technical assistance provider to the tribal coalitions,  and it was an absolute honor to work with our sister coalitions in the struggle to increase safety for Native women,” said Rose Quilt, Director of Research and Policy for NIWRC. “Since 2013, in close partnership with Tribal coalitions, many steps were taken collectively to increase the safety for Native women and to hold perpetrators accountable. We look forward to our continuing this work together with ATCEV.”