Congress amended VAWA in 2005 to include a tribal title by which it requires an annual Tribal consultation to be organized by the USDOJ and Indian tribes dedicated to addressing violence against Indian women. On May 28th, OVW launched preparations for the 2020 consultation and held a WebEx to discuss plans for the 15th Annual Government-to-Government Tribal Consultation on  Violence Against Women.

“Under the consultation mandate, the federal departments—Departments of Justice, Health and Human Services, and Interior) must each consult annually with Indian nations on issues concerning the safety of Indian women. To continue to increase protections for Native women, Indian nations need to continuously identify the roadblocks and solutions that will allow us as governments to protect women.” —Juana Majel-Dixon, Co-Chair, NCAI Task Force on Violence Against Women.

An annual consultation between the United States and Indian nations as governments is on the highest level a discussion of the legal, policy, and administrative issues essential to safeguard the lives of Indian women and the successful implementation of VAWA as governments. This nation-to-nation interaction provides an avenue for Tribal governments and the United States to discuss matters that at the broadest level impact the safety of Indian women. It provides an opportunity to examine and address important issues that impact all Indian nations in providing safety for women.

Based on the various concerns identified from the consultations (2006-2012), Congress strengthened the consultation mandate when it reauthorized VAWA in 2013. These amendments addressed concerns from Tribal leaders about the consultation process allowing for mutual dialogue as governments of the legal and policy roadblocks to the safety of Native women.

The VAWA 2013 amendments to the consultation provision  established a 120-day notification period of the date and location of the annual consultation, and required the Department of Interior to attend. It also mandated the Attorney General to submit to Congress a report of Tribal recommendations made during the consultation and progress made to address the Tribal concerns. The 2019 Tribal Consultation report is available at: bit.ly/3eI4o1c

Progress Made Based on the VAWA Annual Consultation Process

Since 2006, Tribal leaders have raised at the annual consultation the most serious roadblocks to the safety of Native women and issues impacting the ability of Indian tribes to protect women.

Understanding that this government-to-government consultation process on violence against Indian women has resulted in major legislative and administrative victories is important in preparation for the 2020 annual consultation. This progress must continue until safety and justice for Native women are achieved.

2007 OVW Policy Change—Allowing children to be present at OVW-funded events.
2010 Congressional Act—Increase in sentencing limitation on tribal courts from a maximum of 1-year incarceration per offense to up to 3 years for a single conviction under the Tribal Law and Order Act amending the Indian Civil Rights Act.
2011 DOJ Policy Change—28 Indian tribes allowed direct access to the National Crime Information Center through the USDOJ.
2013 Congressional Act—Return of jurisdiction over certain non-Indian domestic violence abusers; increase in funding for the tribal coalition grant program; and other important amendments. 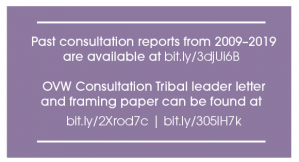 Past consultation reports from 2009–2019
OVW Consultation Tribal leader letter and framing paper can be found at: bit.ly/2Xrod7c | bit.ly/305IH7k

In preparation for each of the annual consultations, the NCAI Task Force on Violence Against Women has assisted Indian tribes in preparing for the consultation. The Task Force organizes a national webinar to summarize key national concerns and emerging issues for Tribal leaders to consider in their preparation. During the  webinar, Tribal leaders and representatives receive a briefing of priority issues, specific tribal concerns and recommendations, for the consultation. This year in light of concerns regarding COVID-19, the national webinar, “Tribal Consultation on Violence Against Indian Women (VAWA 2013, Section 903),” is scheduled for September 2, 2020, at 11 a.m. PT/12 p.m. MT/1 p.m. CT/2 p.m. ET. You can register now at bit.ly/2XzLVxd.

Like in past years, this current Restoration provides an overview of Tribal priority issues for the 2020 annual consultation. This section is intended to provide a review of concerns and recommendations made by Tribal leaders addressing the three statutory areas identified for consultation. 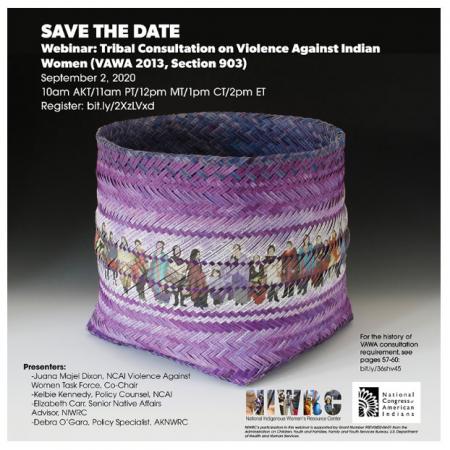 The Federal Response to the VAWA 2005 Consultation Mandate

Since 2009, the consultation process organized by OVW has improved each year with issuance of the required consultation reports to Congress and also made available online. The pre-consultation process to determine date, location, and consultation issues are determined through a series of scoping calls. The annual consultation established under the VAWA 2005 is now institutionalized and provides a process to annually review and monitor critical issues concerning the safety of Native women. OVW over the last 14 years has consistently coordinated the annual consultation and this process has resulted in annually identifying the most urgent concerns and recommendations many of which have been addressed by Congress as amendments to federal law or federal departments or agencies policy changes.

To improve the consultation process, Tribal leaders have also raised consistently that the annual consultation is a government-to-government dialogue and a time for presentations by tribal leaders of the concerns and recommendations of their respective nations regarding the three broad categories stated under the statute. The concerns previously raised have included the following:
• Consultation is not the time for federal presentations designed to provide training and education.
• Framing papers developed by the federal agencies seeking response from Tribal leaders should be distributed no less than one month prior to the consultation if not sooner.
• The consultation agenda should reflect a government-to-government relationship and should not be open to public comment or dialogue.
• The consultation statute mandates the Attorney General, Secretary of HHS, and DOI attend the consultation, and attendance of top leadership of these Departments is inconsistent.