Due to coronavirus (COVID-19) pandemic, Congress has not acted on any pending legislation and is instead focusing on legislation packages aimed to address this ongoing threat. While Congress has paused its action on pending legislation, it is expected that Congress and the President will continue to focus on bills to address the impacts of COVID-19.   NIWRC continues to advocate on behalf of Tribes and Tribal programs to ensure that the needs of victims and survivors are considered and included in COVID-19 related packages moving forward.

On May 12, 2020, democratic leadership introduced a fourth phase stimulus package, the Health and Economic Recovery Omnibus Emergency Solutions (HEROES) Act. While it is not expected to pass the Senate, HEROES would provide important funding resources to programs serving victims and survivors including:

COVID-19 Passed Legislation
Please see this short summary on the packages that have been passed by Congress and signed by the President.

Coronavirus Preparedness and Response Supplemental Appropriations Act, H.R 6074
H.R. 6074 includes $950 million for grants and cooperative agreements to be administered through the Centers for Disease Control (CDC) for state and local governments, tribal governments, tribal organizations, and urban Indian organizations. The funding is for public health preparedness and response activities, including epidemiology, lab capacity, infection control, communications, and other efforts. Of the $950 million, not less than $40 million was set aside specifically for tribal nations, tribal organizations, and urban Indian organizations. The CDC has since allocated $80 million dollars in funding to Indian Country and is now in the process of disbursing those funds.

Additionally, H.R. 6074 includes language authorizing the use of funds to reimburse federal agencies, such as Indian Health Service, in addition to tribal nations, tribal organizations, and urban Indian organizations that may have incurred costs related to coronavirus response and mitigation prior to the enactment of the supplemental funding package.

Families First Coronavirus Response Act, H.R. 6201
H.R. 6201 includes $64 million to be appropriated into the Indian Health Services Account. Additionally, it includes coverage of testing for COVID-19 at no cost-sharing to American Indians and Alaska Natives regardless of where services have been authorized. Lastly, $10 million was set aside for grants for Indian programs within the Older Americans Act (OAA).

Pending Legislation Addressing Violence Against Women
While currently paused, NIWRC continues to advocate for and track the movement of several bills related to addressing violence against Native women.  Please see below for the latest update on several bills that will likely resume negotiation and movement once COVID-19 related legislation slows.

Last reauthorized in 2013, the authorization for VAWA expired in 2018.  On April 4, 2019, the House of Representatives passed a VAWA Reauthorization bill (H.R. 1585). This bipartisan bill was developed in partnership with the national and tribal advocacy organizations.  H.R. 1585 includes critical resources for tribes to implement VAWA and necessary lifesaving amendments to enhance tribal sovereignty and safety for Native women. H.R. 1585 is widely supported across Indian Country.
Bipartisan negotiations in the Senate unfortunately broke down and has resulted in two Senate Bills to reauthorize VAWA. 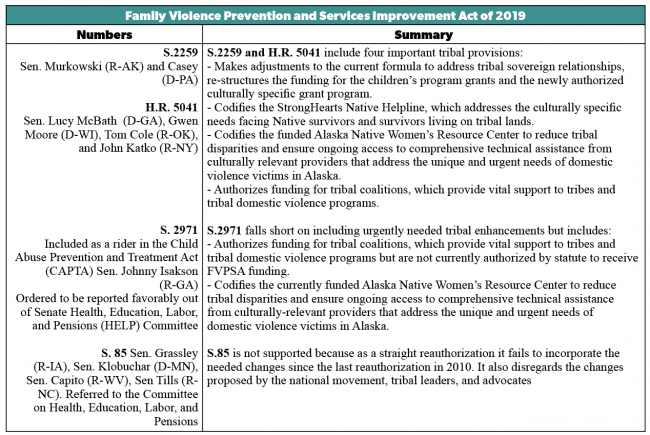 The Family Violence Prevention and Services Act (FVPSA) authorization expired in 2015. The FVPSA provides critical support for shelters, coalitions, training and technical assistance centers, children’s services, emergency response hotlines, and prevention initiatives. The FVPSA is the only federal grant program solely dedicated to domestic violence shelter and supportive services. It is the primary source of funding for these services for Indian tribes.

This past year, a coalition of national advocacy organizations worked closely with congressional staffers in both the House and Senate to draft of an enhanced reauthorization of the FVPSA reflecting the diverse needs of domestic violence victims and priorities of Indian tribes and the domestic violence field. In July 2019, Senators Bob Casey (D-PA) and Lisa Murkowski (R-AK) introduced S. 2259. In November, House Representatives Lucy McBath (D-GA), Gwen Moore (D-WI), Tom Cole (R-OK), and John Katko (R-NY) introduced a companion bill H.R. 5041. These bills, S. 2259 and H.R. 5041, expand grant programs and make many needed improvements so that more survivors have access to support and safety including:

On December 12, 2019, the Senate Health, Education, Labor, and Pensions (HELP) Committee passed S.2971 a package of legislation inclusive of a bill to reauthorize FVPSA.  Unfortunately, S.2971 falls short on the tribal enhancements included in S.2259 and H.R. 5041.

NIWRC and the coalition looks forward to continued conversations when Congress returns to regular business to ensure that the FVPSA bill moving forward is inclusive of more robust enhancements for Tribes and tribal programs. 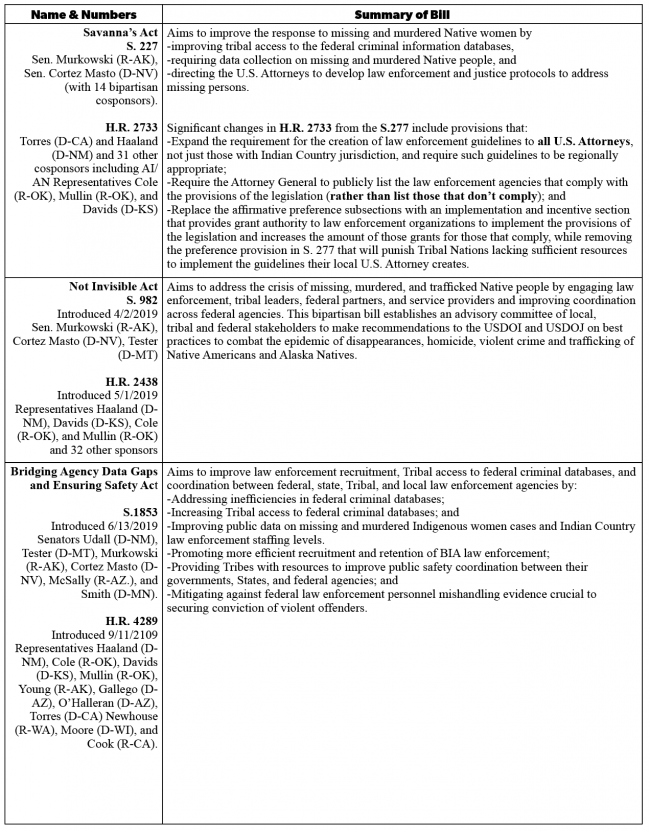 Introduced in both the Senate (S.227) and House (H.R. 2733). Originally, advocates and NIWRC raised several serious concerns with S.227. Those concerns were addressed in H.R. 2733 and have subsequently been addressed in the markup of S.227  On March 11, 2020 , S.227 was passed by Unanimous Consent in the Senate. H.R. 2733 recently passed through the House Judiciary Committee, when Congress returns to regular business, it is expected to move to a full vote in the House.

Savanna’s Act aims to improve the response to missing and murdered Native women by:

Significant changes that NIWRC and other organizations have advocated for include:

Not Invisible Act
Introduced in both the Senate (S.982) and House (H.R. 2438), the Not Invisible Act aims at addressing the crisis of missing, murdered, and trafficked Native people by engaging law enforcement, tribal leaders, federal partners, and service providers and improving coordination across federal agencies. On March 11, 2020 , S.982 was passed by the Senate.
This bipartisan bill establishes an advisory committee of local, tribal, and federal stakeholders to make recommendations to the Department of Interior and Department of Justice on best practices to combat the epidemic of disappearances, homicide, violent crime, and trafficking of Native Americans and Alaska Natives.

Introduced in the Senate, the Finding and Investigation Native Disappearance Act (FIND Act) (S.1893) aims to require the Comptroller General of the United States to conduct a study on ways to increase reporting of missing Indians and the effects of the use of methamphetamine and other illegal drugs on violent crime in Tribal communities, and for other purposes.

Introduced in both the Senate (S.290) and the House (H.R. 958), the Native Youth and Tribal Officer Protection Act (NYTOPA) aims to reaffirm tribal criminal jurisdiction over some crimes committed by non-Indians including: child abuse and crimes that are committed against certain public safety and justice officials.

Introduced and passed out of the Senate Committee on Indian Affairs, the bipartisan Survive Act (S.211) would direct that five percent of the total annual outlays from the Crime Victims Fund (CVF) be provided to Indian tribes to provide crime victim services.  Since Fiscal Year 2018, Congress has appropriated 5% of the CVF for a tribal set aside, S.211 would make the authorize the appropriation permanently.

Introduced in the Senate, the Alaska Tribal Public Safety Empowerment Act (S.2616) aims to expand the jurisdiction provided in the Violence Against Women Act of 2013 (VAWA) to apply to Alaska Native villages on a pilot basis. This bill would also expand covered crimes to include crimes of sexual violence, sex trafficking, stalking, and assault of law enforcement or corrections officers.