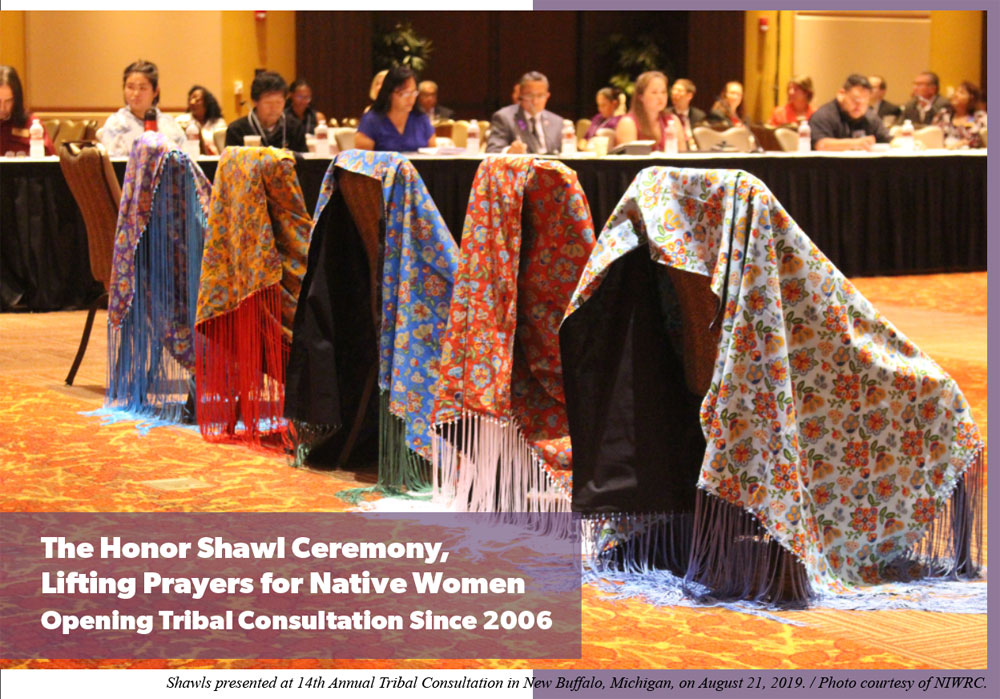 On September 16, 2006, three Honor Shawls opened the first annual tribal consultation mandated under the 2005 Violence Against Women Act held at the Shakopee, Mdewakanton Sioux Community in Minnesota. From 2006 until present, each annual consultation has opened with an Honor Shawl Ceremony.

The shawl ceremony was offered in 2005 to the Tribal coalitions as a gift from Tlingit Elder Jessie Johnnie, from Hoonah, Alaska. Through her guidance, support, and encouragement, the Tribal coalitions created three honor shawls. As Tribal leaders, advocates, and survivors from Indian tribes across the country shared their histories and how violence impacted their relatives and changed their communities, the shawl ceremony developed as a cultural practice of the annual consultation.

Originally in 2006, three shawls were created and dedicated to those lost to the violence, those yet to come, and a third for the women across Tribal nations seeking safety in their lives.  For the children yet unborn, a colorful shawl with butterflies was created. For those lost to the violence a black shawl with butterflies was created. On the black shawl, the fringe was incomplete as if there was not enough to go all the way around.

This was with intent, to signify the horrific act of women being ripped from their lives and relatives. For those seeking safety in their lives, prayers were offered that our sovereign Indian nations would stand and provide women the protection needed.

In the early years, other tribal women contributed to the shawl ceremony. Caroline Antone, of the Southwest Indigenous Women’s Coalition offered the concept of the butterflies and the message of healing and hope that butterflies represent. Tillie Black Bear, Grandmother of the Battered Women’s Movement from the Rosebud Sioux Tribe, initially offered the honor song for the shawl ceremony. Later, Elder Lorena Dixon of the Pauma Band of Luiseno Indian gifted the coalitions a song to accompany the shawl ceremony frequently led by her daughter Juana Majel Dixon.

The shawl ceremony has developed over the last 14 years and lives as a cultural component of the government-to-government consultation process lifting the voices of  Native women—past and present.