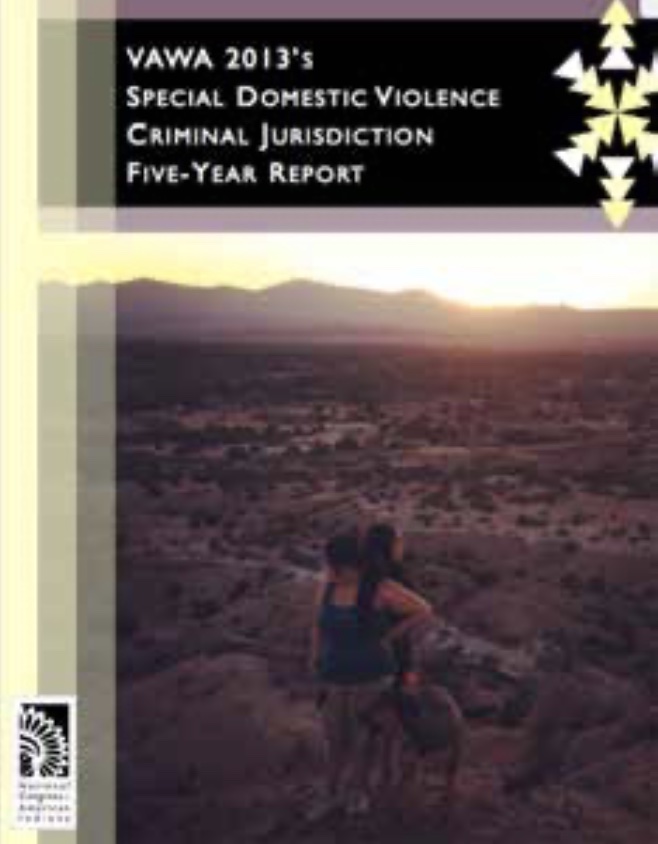 (WASHINGTON, D.C., March 20, 2018)—The National Congress of American Indians (NCAI) has released a new report summarizing results of the first five years of tribal government-expanded criminal jurisdiction over non-Indians under the tribal provisions of the 2013 reauthorization of the Violence Against Women Act (VAWA 2013).

The report was released in conjunction with the March 19th Senate Judiciary Committee Hearing on “The Need to Reauthorize the Violence Against Women Act.”

VAWA 2013 created a framework for tribal courts to prosecute non-Indians for certain violent crimes against Indian citizens—something that has not happened in 35 years, since the U.S. Supreme Court decision in Oliphant v. Suquamish Tribe reversed this sovereign jurisdiction. VAWA 2013 recognized and affirmed the inherent sovereign authority of tribal nations to exercise criminal jurisdiction over certain non-Indians who commit domestic or dating violence against Indian victims on tribal lands.

NCAI works closely with the 18 tribal nations who have arrested non-Indians under this landmark provision. These tribes report 143 arrests of 128 different non-Indian abusers. These arrests have led to 74 convictions and 5 acquittals to date, with some cases still pending. VAWA 2013 has allowed tribes to finally prosecute these long-time abusers who previously had evaded justice, and provide increased safety and justice for victims who previously had little recourse against their abusers. The report highlights specific examples illustrating successes as well as gaps in the law that Congress should address.

The report documents how committed each tribe has been to successfully implementing VAWA and ensuring the effective administration of justice in their communities. Not only do non-Indian offenders receive a fair day in court, but many tribes include broader resources aligned with cultural values for community wellness to ensure that these defendants receive help and support. Fifty-one percent of the defendants were sentenced to batterer intervention or other rehabilitation programs as a part of their tribal court sentences.

“The success of VAWA 2013 demonstrates that tribes can and will provide effective justice to their communities, and fair process to all those who appear in tribal courts,” said NCAI President Jefferson Keel.

VAWA 2013 only allows tribal courts to prosecute non-Indians for a narrow set of crimes. The report also documents the limitations of the law, including the lack of tribal court jurisdiction over crimes against children, law enforcement personnel, and sexual assault crimes committed by strangers. Tribes express continued frustration at their inability to prosecute these crimes—many of which occur in conjunction with a domestic violence offense—often with dangerous and devastating consequences for victims. Many tribes also report that a lack of funding is the only thing preventing them from implementing VAWA.

“NCAI and its member tribal nations stand ready to advocate for further expansions of this law to ensure public safety and justice in Indian Country,” said Juana Majel-Dixon, Co-Chair of the NCAI Task Force on Violence Against Women.