International Update: UN Commission on the Status of Women

The Commission held its 62nd session at UN headquarters in New York City on March 13–24, 2018. The Commission’s priority theme was “challenges and opportunities in achieving gender equality and the empowerment of rural women and girls,” and its review theme was “participation in and access of women to the media, and information and communications technologies and their impact on and use as an instrument for the advancement and empowerment of women.” The Indian Law Resource Center, National Congress of American Indians, and National Indigenous Women’s Resource Center organized a screening of the feature film Wind River and an expert panel discussion about violence against indigenous women in rural America on the sidelines of the Commission’s session. Caroline LaPorte, Senior Native Affairs Policy Advisor for the National Indigenous Women’s Resource Center; Carmen O’Leary, Executive Director of the Native Women’s Society of the Great Plains; and Chris Foley, Attorney at Indian Law Resource Center served as panelists. The screening at the UN Church Center Chapel was well attended and was effective in raising awareness among the international community and public regarding violence against indigenous women in the United States, including the crisis of murdered and missing women.

On April 17, 2018, the President of the General Assembly of the United Nations held the first of three planned informal interactive hearings about “enhancing the participation of indigenous peoples’ representatives and institutions in meetings of relevant United Nations bodies on issues affecting them.” The purpose of these hearings is to discuss how best to ensure that indigenous peoples’ governments or representative institutions are able to participate in and contribute to the work of the UN. It is important that tribal governments be able to participate directly in UN meetings on issues affecting them, such as meetings of the Commission on the Status of Women and the Human Rights Council. Violence against women and violence against indigenous women are serious human rights violations and are regular topics at many UN meetings. Tribal governments have much to contribute to those debates, but current UN rules make it difficult or impossible for them to participate. The second and third hearings will take place in Spring 2019 and Spring 2020 on the sidelines of the annual sessions of the UN Permanent Forum on Indigenous Issues. In late 2020, after this round of consultations, the General Assembly will again attempt to negotiate new rules for indigenous participation.

For more information on the history of this issue in the United Nations, see https://www.un.org/development/desa/indigenouspeoples/participation-of-… 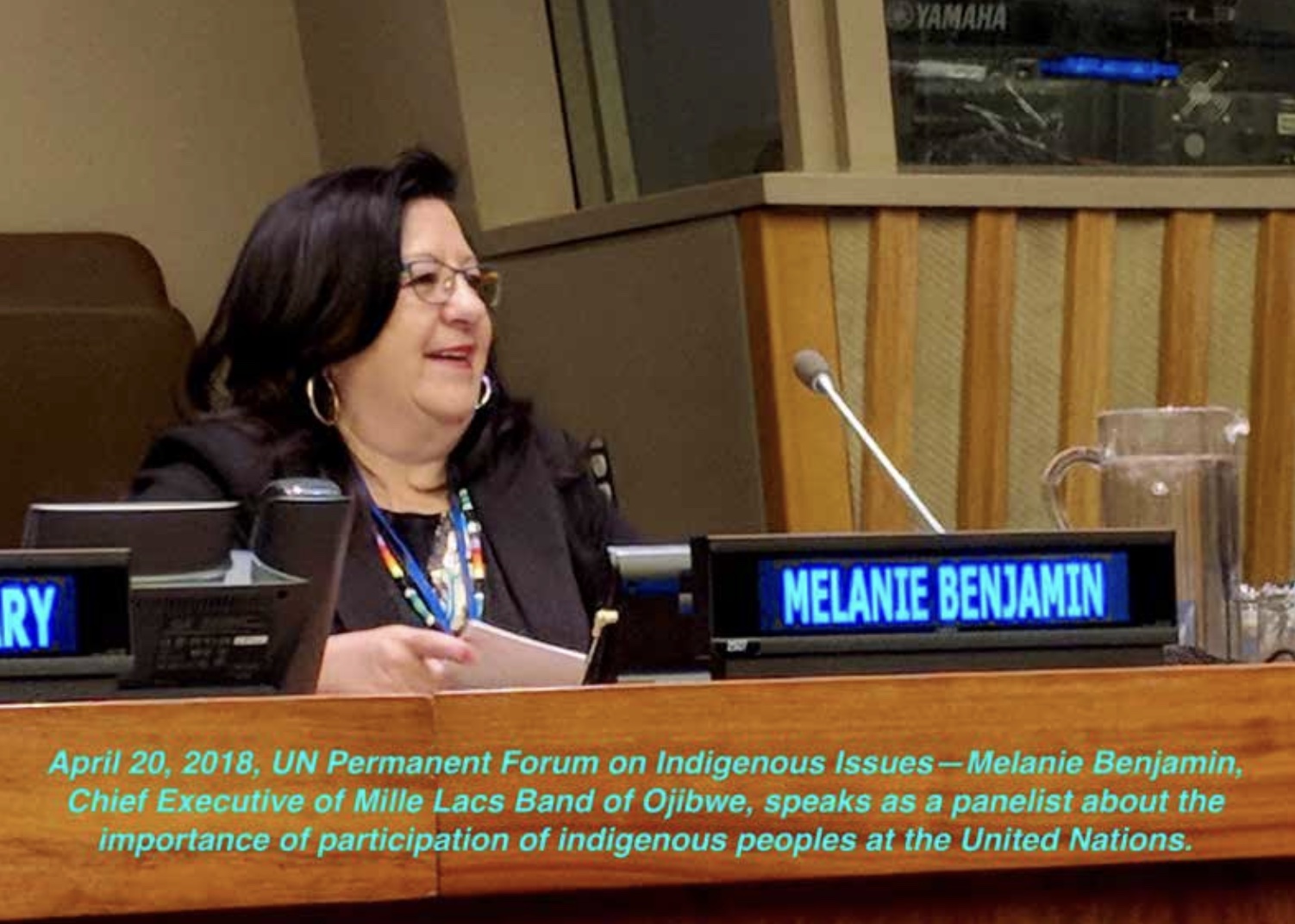 The Permanent Forum, an advisory body to the UN Economic and Social Council, held its 17th session at UN headquarters in New York City on April 24–May 5, 2018, focusing on the theme “Indigenous peoples’ collective rights to lands, territories, and resources.” On April 20, the Permanent Forum addressed follow- up to the outcome document of the World Conference on Indigenous Peoples, including participation of indigenous peoples at the United Nations. Melanie Benjamin, Chief Executive of Mille Lacs Band of Ojibwe, participated as a panelist during that discussion. She shared information about their tribal government and urged the UN to enable indigenous governments to participate fully in its work.

The Human Rights Council works to enhance the promotion and protection of human rights and to investigate human rights violations. During its 38th session in Geneva on June 18–July 6, 2018, the Council is expected to hold a day-long discussion on women’s rights. Details about the session will be available at http://www.ohchr.org/EN/HRBodies/HRC/Pages/Sessions.aspx. The Council will meet again in September 2018, when it is expected to hold a half-day discussion on indigenous rights.

Expert Mechanism on the Rights of Indigenous Peoples

The 11th session of the Expert Mechanism on the Rights of Indigenous Peoples will be held on July 9–13, 2018. The provisional agenda includes: advice and study on free, prior, and informed consent; country engagement; interactive dialogues with national, regional, and indigenous human rights institutions; the UN Declaration on the Rights of Indigenous Peoples (good practices learned); panel on transitional justice; inter-sessional activities and follow-up on thematic studies; and future work of the Expert Mechanism.