On November 18, 2019 the Indian Law Resource Center participated in a symposium at Georgetown University, Missing and Murdered Indigenous Women, Human Rights at Home. Center attorney Chris Foley spoke about how international human rights instruments address violence against Indigenous women and Congresswoman Deb Haaland of New Mexico spoke about national level policy responses to this crisis in Canada and the United States. The other panelist, Qajaq Robinson from Canada, spoke about Canada’s National Inquiry into Missing and Murdered Indigenous Women and Girls. Robinson served as Commissioner during this multi-year, federal government investigation. The final report from Canada’s Commission includes the results of their historical investigation as well as forward-looking policy recommendations. Canada’s Inquiry process and the Commission’s report are both potential models for work here in the U.S. Full details about Canada’s National Inquiry are available at mmiwg-ffada.ca/.

The UN Commission on the Status of Women will hold its 64th annual session at UN Headquarters in New York from March 9-20, 2020. This year, the Commission will observe the 25th anniversary of the adoption of the Beijing Declaration and Platform for Action. In the Beijing Declaration, countries explicitly affirmed their determination to: “[i]ntensify efforts to ensure equal enjoyment of all human rights and fundamental freedoms for all women and girls who face multiple barriers to their empowerment and advancement because of such factors as their race, age, language, ethnicity, culture, religion, or disability, or because they are indigenous people.” The Declaration and Platform for Action also acknowledge that Indigenous women often face barriers not only as women, but also as members of Indigenous communities. While registration to attend the formal meetings of the CSW has closed, there are many related parallel events organized by NGOs and women’s rights advocates that take place throughout New York City during the CSW sessions. Registration to attend these events is generally free. Details and schedules will be available at ngocsw.org/.

The UN Permanent Forum on Indigenous Issues will meet in New York from April 13-24 for its 19th Session. The Permanent Forum is a high-level advisory body to the UN Economic and Social Council that addresses Indigenous issues in six mandated areas: economic and social development, culture, the environment, education, health, and human rights.

The theme of this year’s session is “Peace, justice and strong institutions: the role of Indigenous peoples in implementing Sustainable Development Goal 16.” Sustainable Development Goal 16, an internationally agreed upon policy goal, is to “promote peaceful and inclusive societies for sustainable development, provide access to justice for all and build effective, accountable and inclusive institutions at all levels.” During the Permanent Forum’s session there will also be a separate UN meeting to discuss how to change UN rules to allow tribal governments to participate in certain UN meetings as governments. If these rules are changed, then tribal governments would be able to speak directly on the international stage about tribal policy concerns and priorities, including matters related to violence against indigenous women. This would be an important step towards realizing Indigenous peoples’ rights of self-government and selfdetermination. 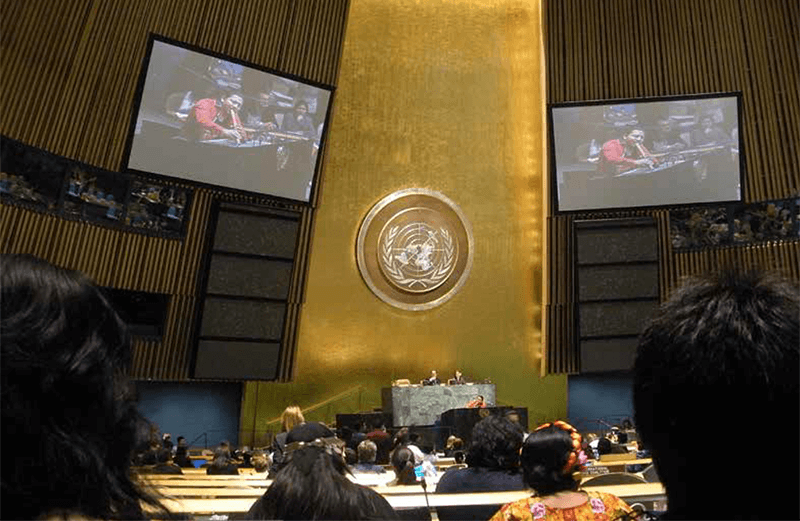 Registration for the Permanent Forum is now open, and details can be found at https://bit.ly/2uoe7Iw. There will probably be a separate, simpler registration process for the meeting about the participation of indigenous governments at the UN. Details should be posted on the same webpage. Contact the Indian Law Resource Center at mt@indianlaw. org if you have questions about how to attend the Permanant Forum or similar UN events.

On May 11, 2020, the United States is scheduled to be reviewed by the United Nations’ Universal Periodic Review Working Group. The Universal Periodic Review (UPR) is a country-driven UN human rights process that involves a review of the complete human rights performance of a country. These rights include Indigenous peoples’ collective rights, Indigenous women’s rights to live free of all forms of violence and discrimination, and other rights acknowledged in the UN Declaration on the Rights of Indigenous Peoples. Every member state of the UN is reviewed on a four-year cycle. The Working Group does this work by reviewing a report prepared by the United States government, as well as stakeholder reports submitted by civil society organizations, and conducting an in-person review with representatives of the U.S. government. The Working Group then issues a report with recommendations for actions to improve human rights compliance. The United States’ report is due in February. However, the U.S. did not meet the deadline to file its midterm report in May 2019, and it is not clear if the government will meet this next deadline either. If the U.S. refuses to participate in this process, the Working Group will likely decide to reschedule the review for 2021.

Finally, the UN Human Rights Council will hold its 44th Session June 15-July 3, 2020. This session is expected to include a full day discussion of women’s rights, although the agenda has not yet been finalized.