A Retrospective on the Alaska Native Women’s Resource Center 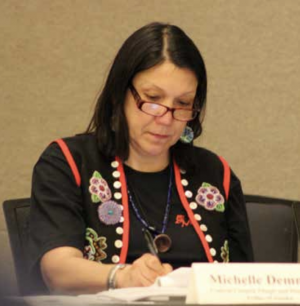 The Alaska Native Women’s Resource Center (AKNWRC) looks forward to a new decade of serving the broad needs of our Alaska Native tribes and communities. “We have made progress in carrying out our mission for the last two years with full funding, and this next year will be no exception,” said Tami Truett Jerue, AKNWRC Executive Director. “The services, information, and assistance we provide continues to be making a difference to Alaska Tribal Governments and the tribal citizens they serve.”

Over the next decade, the AKNWRC will continue to expand partnerships with state, tribal, and federal government agencies, sharing necessary critical information and providing platforms for tribes to identify and share their culturally specific ways of addressing domestic violence and sexual assault with an emphasis on isolated underserved tribes. The Center is working closely with tribes to develop Alaska Native specific advocacy and tribal court training modules creating tribally driven tools for strengthening local and statewide capacity to address domestic violence and sexual assault.

Reestablishing Safety Through the Exercise of Tribal Sovereignty

The Alaska Native Women’s Resource Center is unique to Alaska. The State specific tribal resource centers were originally authorized in 2010 as part of the Family Violence Prevention and Services Act reauthorization (FVPSA 42 U.S.C. 10410 or Sec. 310). Congress included the following description for state resource centers “to reduce disparities in domestic violence in states with high proportions of Indian (including Alaska Native) or Native Hawaiian populations,” and such centers “shall provide statewide information, training, and technical assistance to Indian tribes, tribal organizations, and local domestic violence service organizations serving Indians (including Alaska Natives) or Native Hawaiians, in a culturally sensitive and relevant manner.” Funding of the AKNWRC is essential to providing the Indian tribes in Alaska the support needed to sort through the complicated and interlocking laws, policy and resulting barriers preventing the exercise of sovereignty by Alaska tribes to protect Native women. It is an extension of the federal trust responsibility to Indian tribes. 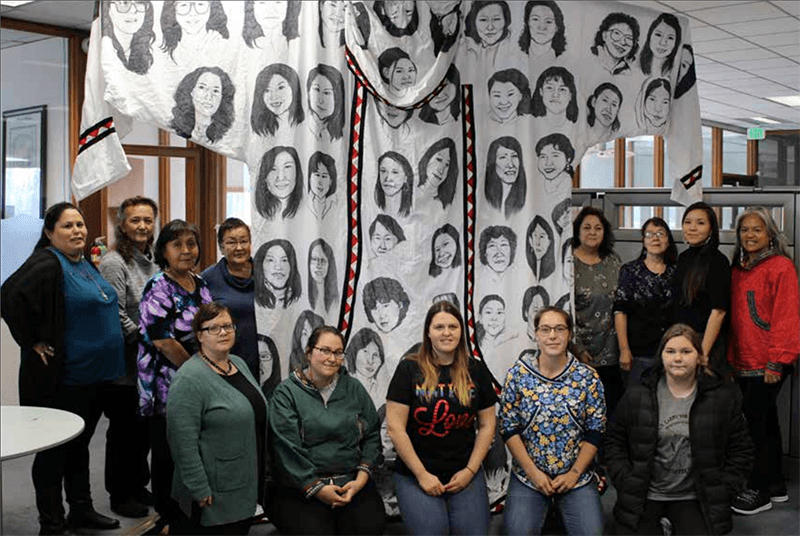 Staff and advocates pose with the Memorial Qaspeq, created by Amber Webb, at the Advocacy Organizer’s Meeting in Fairbanks, Alaska, in October 2019 at the Alaska Native Women’s Resource Center. | Photo courtesy of AKNWRC.

First, the National Indigenous Women’s Resource Center (NIWRC) was funded under this language in 2011 to assist in the formation of an Alaska Native Women’s Resource Center. After working closely with and receiving the support of the NIWRC, the AKNWRC was formally funded in 2017 under this same authorizing language. Since receiving funding, the AKNWRC has been successfully implementing over the past two and one-half years, grassroots efforts developing tribally driven culturally-specific materials for Alaska Native tribes. Because of the disparities severely impacting the health and safety of underserved Indian tribes in isolated, remote regions of the state, including the outreach and availability of technical assistance to Alaska Native tribes, we continue to prioritize working with underserved remote tribes. Given the geographic remoteness assisting tribes in identifying a network of information and possible collaborators is very important. In 2020, two developmental working groups of tribal representatives are being formed with convenings in the summer of 2020 to expand the development of Alaska Native specific materials. In addition, the AKNWRC will continue to expand its knowledge base by convening developmental working groups of Alaska Native tribal experts and leaders. This year, we will attempt to define the role that their faith plays in developing tribal responses to domestic violence. The Center will continue to provide regional outreach opportunities in 2020 to Alaska Tribal leaders and presentations on AKNWRC services and victims’ unmet needs such as emergency shelter services and challenges to current responses, including emergency transport and law enforcement intervention.

In 2020, the AKNWRC will launch culturally driven technical assistance for the Office of Victims of Crime grantees, providing tools for developing Crime Victim Services Programs that are as unique as the tribes themselves. “The OVC TA Project is particularly exciting in that this is a new funding source for tribes in Alaska, and also Indian tribes in the lower 48, to expand and develop crime victim services programs with the recent funds Congress set aside under the Crime Victims Fund for Indian tribes,” said Jerue. The AKNWRC is anticipating Alaska Native tribes will develop meaningful and successful programs to finally be able to provide services to the broad array of tribal crime victims who have been severely underserved in our state.