As social justice actions continue to increase across Indian nations and communities, lawmakers and government departments are being held accountable to remove the legal barriers and make the changes needed. Survivors, their families, Indian nations, and the movement for the safety of Native women have created a national groundswell calling for justice. This grassroots movement has also worked to build relations and gain the support of the United Nations Commission on the Status of Women, and the Permanent Forum on Indigenous Peoples.

Failed Federal Laws and Policies By Which They Are Implemented

Indian nations and the world community are confronted by many issues needing action to be addressed. Yet, the reality that the lives of Indigenous women and girls are the price paid for inaction has created a groundswell calling for justice for MMIW. Congressional hearings, federal reports, statistics, consultations, and testimonials all confirm the MMIW crisis is real, and current laws and lack of resources prevent Indian Nations from protecting Native women from non-Indian perpetrators. These laws are clearly racial loopholes benefiting criminals who are non-Indians. Congress has the authority to restore tribal protections for the safety of Native women and girls. It has the power to authorize and appropriate the resources for tribal justice systems and the services women and girls need to become and stay safe. It is widely recognized that the responsibility for the MMIW crisis rests upon Congress in its inability to act as a body and pass laws to make the changes needed to save the lives of women and girls. For decades federal law has boxed, limited, the response of tribal law enforcement to non-Indian offenders. “The best we can do is give her a head start.” “The best we can do is take him to the reservation boundary.” “The best we can do is tell her to move off reservation.” How is this response acceptable? The words “safety” and “justice” should have meaning for Native women and girls. 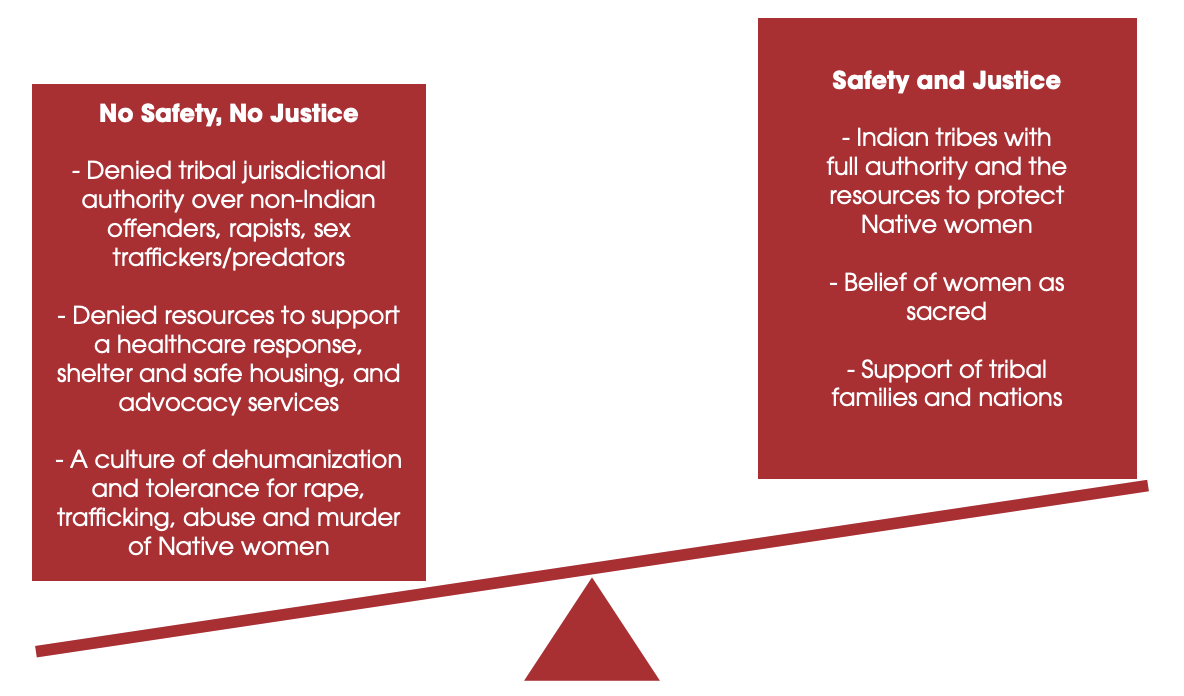 In 2019, Congress failed to pass a single law to address the MMIW crisis. In 2019, six bills were introduced in the Senate and House to recognize, study, and increase the coordination and response of law enforcement agencies to the MMIW crisis. Unfortunately, none of the MMIW legislation introduced in 2019 became law. As concerning, is the failure of Congress to reauthorize legislation that Indian tribes rely on to fund tribal justice and the services for Native women—the Violence Against Women Reauthorization Act (HR 1585 and S.2843) and the Family Violence Prevention Services Act (S.2259). While Congress had the opportunity to act, it fell short on legislating the changes needed.

In 2019, the Senate did pass an important resolution recognizing May 5, 2019, as a National Day of Awareness for Missing and Murder Native Women and Girls. And both the House and Senate held hearings on MMIW. Tribal champions for Native women are pushing for changes but clearly the process has stalled. In 2019, the President issued a Presidential MMIW proclamation and executive order establishing Operation Lady Justice, a task force addressing MMIW. These actions represent an acknowledgment of the crisis but more is needed at a foundational level from the White House such as support for the reauthorization of VAWA (S.2843), the Senate companion to the House passed H.R. 1585.

The NIWRC is working in partnership with the NCAI Task Force, and sister organizations to inform Congress and urge it to act. Efforts at all levels of tribal, state, and federal government are required to begin making the changes needed. The movement has and must continue to compel action by Members of Congress. The power to generate change rests in the hands of local organizers.

2019 State Responses: Legislative action is also happening at the city, county, and state levels. From the entire west coast to the great plains, southwest and upper midwest state lawmakers have acted to pass legislation to increase the response to MMIW. The state legislation centers on increasing the response to MMIW by monitoring cases through dedicating state personnel and the creation of local task forces. The NIWRC is now tracking legislative actions by state and federal governments to address the crisis of MMIW. Each month, a compilation of MMIW legislative actions, state and federal, is released to our listserv. To sign up for the “Monthly National Legislative Summary Update,” visit https://bit.ly/2Hh1dzM.

Each Person Holds the Authority and Responsibility to Take Action Stand with the Mothers, Sisters, Families, and Nations of the MMIW Organize to Increase Protections for Native Women! Honor MMIWG!

“We demand meaningful legislative reforms that remove barriers to safety for Indian women by recognizing and strengthening the sovereign ability of all tribal nations to protect women and their children.”

Organizing to Recognize and Support Tribal Authority, Responses, and Services

Laws shape public perception and the cultural norms of what is unacceptable, or is a crime. The normalization of violence against Native women occurred as federal law and policies eroded the authority of tribal governments to protect women. It happened as the fundamental right of Native women to safety as human beings were ignored by the United States and violated. These laws and policies over time placed Native women in the status of “unprotected.” The old laws, dating back to the 1800s, that led to this crisis continue to exist today and must be replaced.

“By organizing for changes to federal laws and policies, we remove the foundation of tolerance for violence against Native women,” said Elizabeth Carr, Senior Native Affairs Policy Advisor for the NIWRC. “By demanding justice for our missing and murdered sisters, we compel this government to prioritize and take responsibility for the crisis it has created through its laws and policies.”

The current federal justice system is outdated. Pending legislation is waiting to be voted upon but has stalled. The MMIW crisis occurs at the hands of a range of criminals— domestic abusers, sexual predators, sex traffickers, and other criminals. This crisis requires a range of responses to strengthen tribal sovereignty and provide the resources to implement changes needed. The House has passed H.R. 1585, now the Senate must pass S.2843 to reauthorize the Violence Against Women Act.

Certain MMIW specific legislation supported by NCAI and NIWRC is included under the bills to reauthorize VAWA, H.R. 1585 and S.2843. Other MMIW bills introduced later in 2019 are not included. NIWRC urges Congress to incorporate all of the 2019 MMIW legislation into the final version of VAWA. Indian tribes require passage of the full range of VAWA, and funding under FVPSA (S.2259), and SURVIVE (S.211) to increase their response to this crisis.