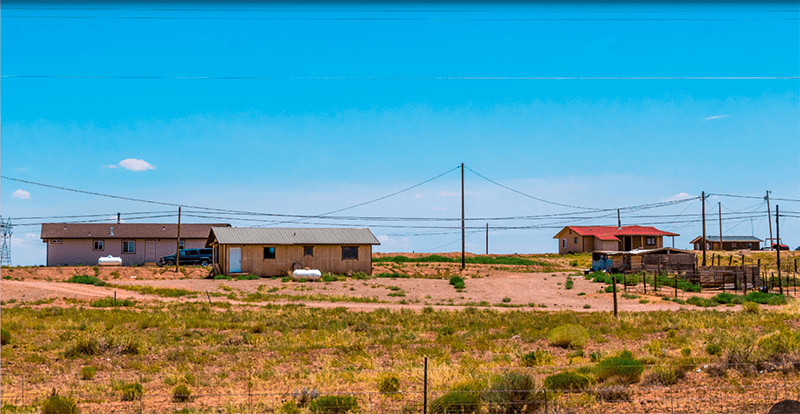 The National Indigenous Women’s Resource Center, the Alaska Native Women’s Resource Center and the National Resource Center on Domestic Violence convened a meeting in Phoenix, Arizona June 4-5, 2019 to establish a National Workgroup on Safe Housing for American Indian and Alaska Native (AI/AN) Survivors of Gender-Based Violence. The goal of this workgroup was to bring together experts from Indian Country who work in the fields of gender-based violence and housing to develop policy and create concrete recommendations for technical assistance, resources and other supports for the sole purpose of increasing the availability of safe, affordable, accessible and sustainable housing for AI/AN survivors of gender-based violence.

At the core of this convening were essential questions about how we can be good relatives to one another, to our nonhuman kinship and to the Land. Because if housing stability is going to be fully realized, we have to ask and answer important questions about what it means to have a duty to one another, about what it means to do good work and to be good people. If we start from the framework that we all deserve safety, that we all deserve a place to belong, that we all deserve community, we can start to move forward. If we can believe that housing and shelter are basic human rights, just as they are basic human needs, we can start to see the outlines of what it is that we have to change about our existing framework and about how we have set about doing this work in the past. What the convening showed us, if anything, is that we truly need time to get our arms around these issues, because the actualization of housing stability will require a major shift in how we have approached this issue historically.

The need for safe, affordable and sustainable housing is a grave concern for AI/AN gender-based violence survivors, the advocates and services who seek to help them, and for their communities who value them. This is especially true considering that domestic violence and sexual assault are the leading causes of homelessness in most communities within the United States.1 The shelter and housing “crisis” in Indian Country and for AI/AN people is nothing new. Housing issues have been present ever since the moment that Indigenous ways of life and tribal communities were destroyed by colonization. A quick study on the eras of federal Indian law and policy make it clear that inhumane practices towards AI/AN peoples and Indian Tribes have historically been the norm and housing is not an exception.

The basic lack of housing for AI/AN peoples is factually the result of massive land theft, systemic removal and other intentional acts across the timeline of the United States’ history.  The treatment of AI/AN people, of Indian Tribes with regards to land became statutorily enshrined around 1830, when Congress passed the Indian Removal Act under the tutelage of one Andrew Jackson. Between 1832 and 1843, most Eastern tribes were removed to the West or were forced to live on smaller reservations East.2

Between 1887 and 1934, the federal policy towards Indian people was shaped by two efforts: 1) take Indian Lands for settlement by whites and 2) take Indians, specifically children, and assimilate to them into white society.3 As a result, the General Allotment Act (commonly referred to as the Dawes Act) was passed. The overall goal of the Dawes Act was “to extinguish tribal sovereignty, erase reservation boundaries, and force the assimilation of Indians into society at large.”4 In accordance with the Act the President was authorized to divide “communally held tribal lands into separate parcels (‘allotments’).”5 Tribal members were assigned an allotment and a trust was supposed to ensue after a set period of time. The remaining tribal land was sold to non-Indian farmers. The idea was to satisfy the goals of non-Indian settlers while making Indians white (and thereby eliminating Indian poverty), simply by having them live in close proximity to one another.6 The act was successful at taking tribal communal land and transferring it to white colonizers for individual consumption, but it was not at all successful in eliminating Indian poverty, which occurred as a direct result of the policy and treatment of AI/AN people since the first contact between Indians and non-Indians occurred.7 First, the Indians had no desire to become white because they were already Indians. Second, the allotments they received, upon which they were to farm and ranch, were not suitable for agriculture. Due to their poverty, many Indians were forced to sell their allotments to white colonizers or they lost the land to foreclosures. Of the nearly 150 million acres of land that tribes owned in 1887, by the time the Dawes Act was repealed in 1934, less than 50 million acres remained.8 My own ancestors lost an 80-acre allotment of land in the Upper Peninsula of Michigan on the East side of Monocle Lake. It is now part of the Hiawatha National Forest.

Thus, the housing crisis in Indian Country has to be viewed first as a historical injustice, one that has been utilized as a tool in the ongoing genocide of indigenous populations. The same is true for the high incidence of gender-based violence in AI/AN populations. The housing crisis and the high rates of violence, lack of adequate resources and criminal justice response to that violence in Indian Country and in communities where AI/AN people reside outside of Indian Country, cannot be viewed as randomized or even consequential occurrences, but rather as manifestations of a larger goal: the eradication of Indigenous people from their lands.

The need for safe, affordable, accessible and stable housing is one of the most pressing concerns for American Indian and Alaska Native survivors of gender-based violence. Domestic and sexual violence are leading causes of homelessness for women and children generally.9 Housing is a basic human right, yet AI/AN survivors of gender-based violence frequently report access, habitability or sustainability issues, leading to layers of vulnerability and increased risk of new or continued victimization. These issues are felt almost universally by the AI/AN population across the housing spectrum. Just as there are urgent issues for AI/AN survivors of gender-based violence who attempt to access shelters or emergency and transitional housing, the same issues are present with regards to the availability of housing assistance and affordable, habitable, sustainable and stable housing.

Please note that for the purposes of this report, the term AI/AN people includes AI/AN people in Indian Country and off reservation. AI/AN people reside in all communities, tribal or non-Tribal, urban or rural, and the policy recommendations included at the end of this report would need to be differentiated based on the needs of AI/AN peoples and based on the resources that can be found within our communities. Consultation would also be needed in order to vet these recommendations through Tribal leadership, who are in the best possible position to know and elevate the needs of their Nations.

The National Institute of Justice (NIJ) through the USDOJ released a study in May, 2016, which found that American Indian and Alaska Native women experience severe rates of violence in their lifetimes, including:

Of the women who experienced sexual violence, 96% of them were victimized by at least one non-Indian perpetrator. This cannot be ignored, though it is certainly true that intraracial violence occurs in tribal communities as well. A Center for Disease Control and Prevention (CDC) report issued in 2017 found that Non-Hispanic black and American Indian and Alaska Native women experienced the highest rates of homicide (4.4 and 4.3 per 100,000 population, respectively).11 The CDC report further concluded that there was a strong link between homicide and intimate partner violence, finding that 55.4% of the cases involving American Indians and Alaska Natives were at the hands of an intimate partner.12 38% of these women were killed with a firearm.13

The link between homelessness and sex trafficking victimization is equally strong and was discussed at the convening extensively. The report “Garden of Truth: The Prostitution and Trafficking of Native Women,” found that of the 105 women who were prostituted and sex trafficked, 98% of them were either currently experiencing or had experienced homelessness.14

These numbers represent the lived experiences of AI/AN women. They are not simply statistics or talking points. They are real individuals, with real experiences of violence in their lives. It is essential to center their stories, which are lacking in this report. It is going to be imperative moving forward to include survivors’ voices into reports such as this one. While working group participants brought their many experiences to the table during the convening, hearing valuable anecdotal information from survivors was not the focus of the convening itself. The focus of the convening was to look at systemic issues from a practice and policy lens.

The intention of this convening was to bring together advocates from diverse fields, backgrounds, regions, and experiences in order to begin thinking about what
During the convening, the following became clear:

Ongoing Questions of the Workgroup

Because the working group was able to begin delving into the many layered issues of housing access, instability and inequality for survivors in AI/AN communities, the convening produced additional questions that need to be explored further. These questions were not resolved by the working group because they are inherently difficult to answer and are existential in nature. They also ask us to examine our underlying premises for the ways in which we have traditionally approached this work with our funders. We have to accept that these are the issues that are at hand for all of us, not just for AI/AN advocates and survivors. An illustrative, not exhaustive, list of these questions is provided below:

Other questions arose that can be answered with additional time and funding allocated to continue the work of the group:

Core Conversations and Themes that Emerged from the Workgroup

The workgroup’s core conversations centered on the following: the housing spectrum, survivors needs, the Trust Responsibility of the Federal Government, Historical Trauma, The Violence Against Women Act, Tribal Housing Codes, The Picture of Poverty and Homelessness In AI/AN
communities, The Need for Culturally Created Resources, The Role of  Tribal Government, Alaska Specific Needs, and Creative Ways to Leverage Funding.

The following are policy recommendations that emerged from the working group as well as from the listening session and the critical conversation which were both held at the FVPSA Tribal grantee meeting. These recommendations were the culmination of the conversations that have occurred over the past year, but they are not meant to be exhaustive. Additional conversations have to happen to ensure that this list is representative of all AI/AN peoples in the United States. A report is forthcoming that details the policy recommendations, the themes that emerged during the convening, and the core conversations that were had. While it awaits approval, the following article is a summation of what was discussed. Again, this is not exhaustive (the actual report is around 60 pages):

The working group is expected to reconvene (and grow) in order to more fully develop these recommendations. Again, the working group met over the course of a day and half. What the working group found to be essential was that space was created over that day and a half to convene individuals from different fields, rather than creating a silo-ed space with gender-based violence advocates only. It was incredibly beneficial to hear from the experts who work primarily in response to housing instability (who service GBV survivors, but who do not mainly focus on the GBV field), to hear what types of funds they access, how they layer that funding, and how they leverage their resources into sustainable services. It is critical going forward to continue engaging in these conversations.