Organized in 2015, the Alaska Native Women’s Resource Center is a tribal nonprofit organization dedicated to ending violence against women with Alaska’s 229 tribes and allied organizations. AKNWRC board members and Steering Committee are Alaska Native women raised in Alaska Native Villages with over 200 years of combined experience in tribal governments, nonprofit management, domestic violence, and sexual assault advocacy (both individual crisis and systems and grassroots social change advocacy at the local, statewide, regional, national and international levels), and other social service experience. AKNWRC’s philosophy is that violence against women is rooted in the colonization of indigenous nations; the tools to address violence against women are inherent in tribal sovereignty and the return of cultural lifeways.

S. 2616 will create a pilot project for qualified tribes to expand the jurisdiction provided in the VAWA 2013 to apply to Alaska Native villages on a pilot basis. While VAWA 2013 exemptions were repealed, the practical effect was that only one of the 229 tribes in Alaska could potentially exercise special domestic violence criminal jurisdiction (SDVCJ). The Alaska Tribal Public Safety Empowerment Act seeks to remedy this situation by extending SDVCJ and other qualifying crimes to Alaska Tribes. The 2013 SDVCJ was limited to crimes that occur in the Indian country of a tribe, which left Alaska Native women unable to obtain protection from incidents of domestic violence.

Upon introduction, Senator Murkowski stated: “[f]ar too many communities in Alaska know what it feels like to lack any means to seek help or justice for a crime of domestic violence or sexual assault because their village lacks advocacy services and law enforcement. This bill aims to change that and empowers villages to develop local solutions to problems,” said Senator Murkowski. “When it comes to domestic violence, Alaska Native women are over-represented by 250 percent—that means our sisters, mothers, aunts, cousins, and loved ones are being violated at rates that are unacceptable anywhere, in any state. Alaska’s tribes need to be able to exercise the special domestic violence criminal jurisdiction to address our staggering statistics. Alaska tribes, with support from the federal government, can be effective partners with the State to address Alaska’s rural public safety crisis.” 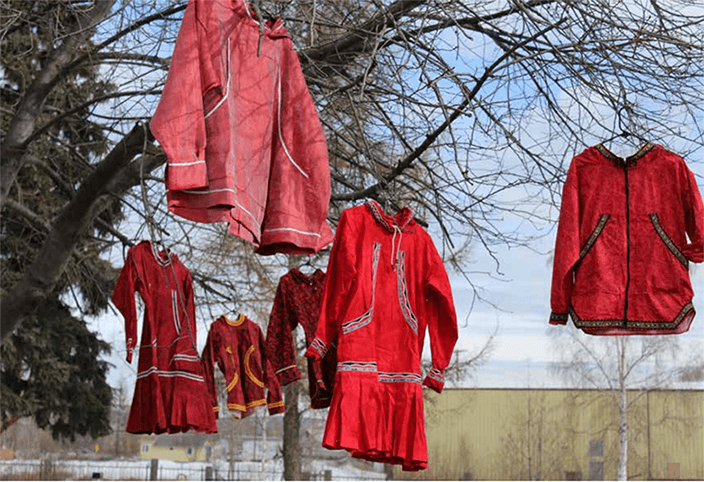 Red kuspuks are displayed as a public honoring of missing and murdered Alaska Native women during the first MMIW Walk for Justice in Fairbanks, Alaska on May 5, 2018, | Photo courtesy of AKNWRC.

The House of Representatives included a pilot project provision in the VAWA Reauthorization Act, H.B. 1585, recognized the inherent authority of Alaska tribes to exercise SDVCJ and defined Indian Country for the purposes of exercising this jurisdiction to: “(1) Alaska Native-owned Townsites, Allotments, and former reservation lands acquired in fee by Alaska Native Village Corporations pursuant to the Alaska Native Claims Settlement Act (43 U.S.C. 33) and other lands transferred in fee to Native villages; and“(2) all lands within any Alaska Native village with a population that is at least 75 percent Alaska Native.”

Senator Murkowski’s bill takes a different approach to defining jurisdiction. While she agrees the population has to be 75% Alaska Native, rather than use the term “Indian country,” she defines jurisdiction to a “village,” which means the Alaska Native Village Statistical Area covering all or any portion of a Native village (as defined in section 3 of the Alaska Native Claims Settlement Act (43 U.S.C. 1602)). The bill would also expand covered crimes to include crimes of sexual violence, sex trafficking, stalking, assault of law enforcement or corrections officers, obstruction of justice, and assault of a law enforcement or correctional officer, any crime against a child, and any crime involving the possession, transportation, or sale of alcohol or drugs where that possession, transportation, or sale is prohibited by an applicable Federal, State, or Tribal law. Eligible tribes must meet the required criteria, including having a community be predominantly Native.

“Senator Murkowski again demonstrates her commitment to the public safety crisis in Alaska,” commented Tami Truett Jerue, Alaska Native Women’s Resource Center Executive Director. “This bill would provide real change to our tribal communities, especially if there is a funding mechanism tied to this bill or implementing tribes are permitted to use funding under the Office on Violence Against Women grant programs.”