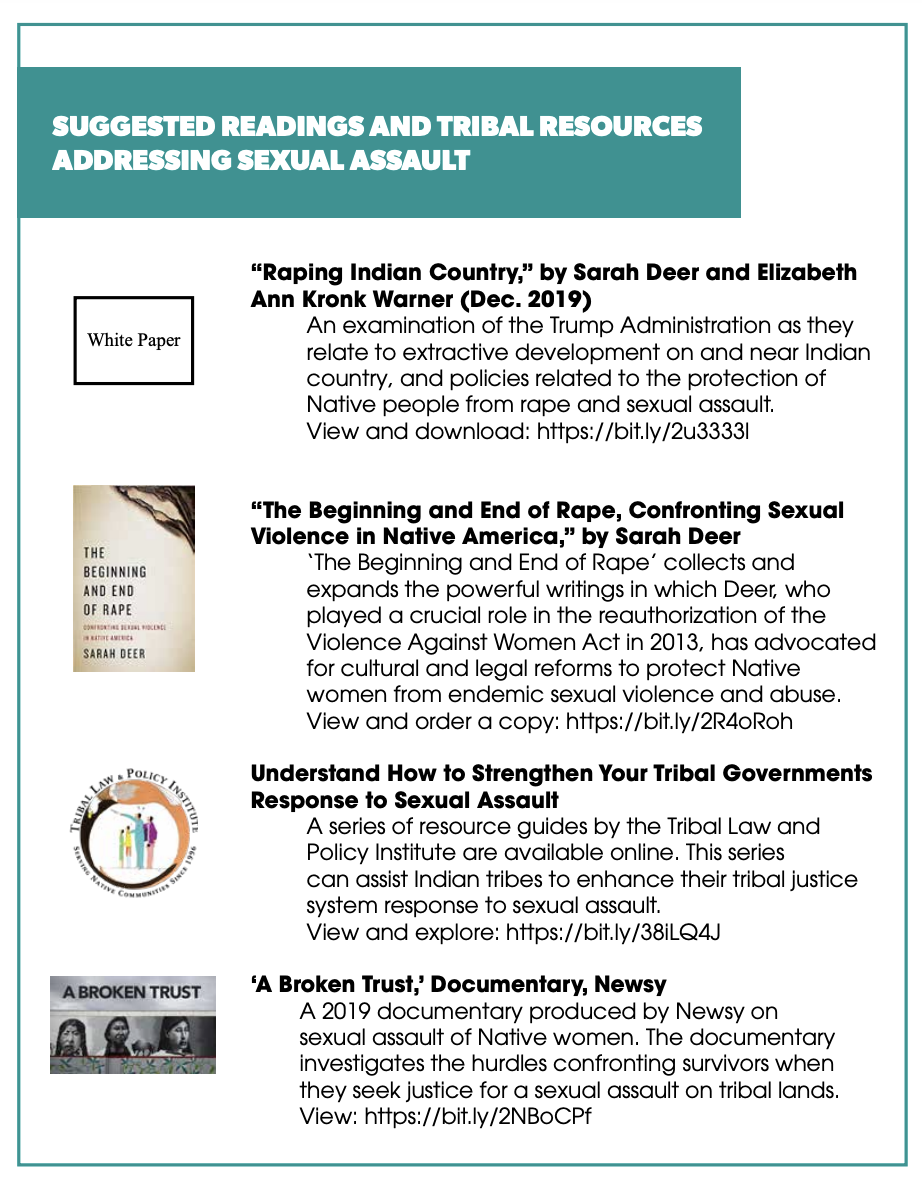 Every year Native women, advocates, and Indian tribes across the United States organize within their communities to host Sexual Assault Awareness Month activities. These community activities are essential to making strong public statements that we will not tolerate sexual violence in tribal communities. The most effective response to sexual assault is an immediate response to support victims of sexual assault and hold rapists accountable. If the system fails to respond, it sends the signal that sexual abuse is accepted, and abusers face no consequences.

Women are sacred, and support for survivors of sexual assault is central to ending violence against Native women. Awareness activities during April are a strong statement of this support. Activities calling for justice such as walks, marches, vigils, prayer circles, and other events throughout April are various forms of tribal community statements honoring survivors of rape and sexual abuse. These activities can also be an important part of the healing journey for survivors and their communities. As the movement organizes to inform the nation and reform the criminal justice system, survivors deserve to know they are supported by their community.

“When the system has failed you time and time, and time again, you don’t feel empowered. It feels like a disconnect between this moment of ‘Me Too’ and the reality of Indian country and sexual assault.”—Sarah Deer, “A Broken Trust, Sexual Assault and Justice on Tribal Lands.”

Lack of Services for Native Survivors of Sexual Assault

The U.S. Attorney’s office declined to prosecute 64% of sexual assault cases across all reservations from 2013-2018. Access to services for sexual assault survivors is similarly limited. Approximately 34% of Native women are raped in their lifetime, and nearly half will experience sexual violence other than rape within their lifetime. When Native women are raped, they are more likely to experience other physical violence during the attack, their attacker is more likely to have a weapon, and they are more likely to have injuries requiring medical attention. Sexual Assault Examiner (SAE) and Sexual Assault Response Team (SART) programs have been shown to improve both the care of survivors of sexual assault and criminal justice outcomes in sexual assault cases. These programs, SAEs and SARTs, are instrumental in facilitating immediate access to appropriate health care and other services for survivors and for minimizing re-victimization by the justice system. A 2014 study used GIS mapping to evaluate the proximity of trained forensic examiners to 650 census-identified Native American lands. The study found that more than two-thirds of Native American lands are more than 60 minutes away from the nearest sexual assault forensic examiner.