National Day of Awareness for Missing and Murdered Indigenous Women May 5th Actions Calling for Justice! 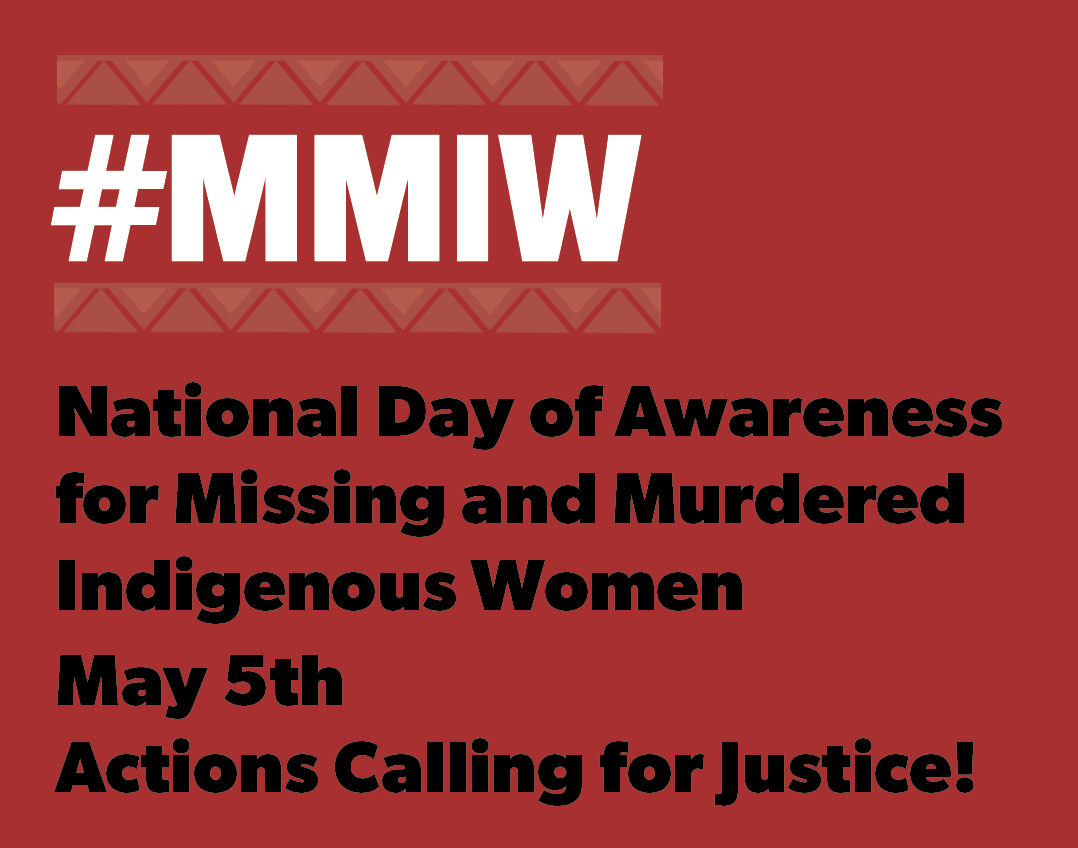 In 2017, Senators Steve Daines and Jon Tester from Montana introduced a resolution recognizing May 5, as a National Day of Awareness for Missing and Murdered Native Women and Girls. It was in response to the murder of Hanna Harris on the Northern Cheyenne Reservation and other abductions and killings of Native women across the United States. Since 2017, actions on May 5th to honor MMIW at the local, regional, and national level continue to grow across the United States and internationally. These efforts are as varied as the Indian Nations, where they are being organized. The silence of tolerance and inaction is being challenged.

When a mother, daughter, or sister goes missing communities understand action is needed immediately. Silence is being replaced with the understanding of the urgency to act—alerting tribal leadership, reporting to law enforcement, not accepting the “no action response,” but demanding a “yes crisis-mode response.”

The United States implemented inhuman governmental policies toward Indian Nations and women. Congress in its 2009 Apology to Native Peoples acknowledged “years of official depredations, ill-conceived policies,” and apologized for the “many instances of violence, maltreatment, and neglect inflicted on Native Peoples by citizens of the United States.” The foundation of the crisis of MMIW is like two sides of a coin, official government laws and policies of depredations representing one side; tolerance and inaction the other. The movement for justice for MMIW challenges these separate crimes against Indigenous women and the system that allows this crisis to continue.

The tribal press conferences, community searches, and justice marches taking place across the continent reflect the emergence of a new standard—holding the government accountable for the criminals, government employees, and the public, who are allowed to prey on Native women and girls. Increased educational awareness actions are needed. Organize conferences, community runs, and public art displays. Produce songs, videos, and films. Wear red and explain to those around you, the world, why. The list of movement actions taking place is long; it is as varied as the people taking action across the nation. 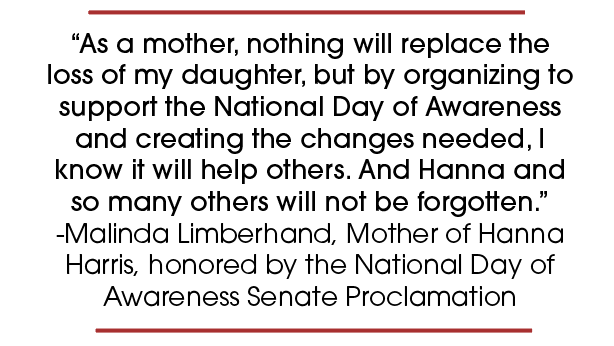 While large organized actions are essential, individual actions provide a social statement of the depth of MMIW. These actions relay to the world the reality that MMIW touches all Indian Nations and the peoples of which they are comprised. In making these personal statements, the loved one is honored, and we hope the family and community are supported. Restoration showcases the following MMIW actions to thank the artist and producers, and encourage everyone to participate in the May 5th, MMIW National Day of Awareness.

Individual Action: Shifting the Cultural Balance to Respect and Awareness

“The main inspiration for the qaspeq was the disappearance of Val Sifsof in July of 2012 from Granite Creek campground. She was a family friend. It was also the awareness of the pattern of deaths and disappearances that I didn’t hear people talking about but that I’d been aware of since I was about 8 years old. They are all our relatives. The goal of the project is to humanize the issue and find a way to make people feel it. I wanted to make the qaspeq large to represent the space that the grief occupies within Native communities. It was done to honor the memory of our relatives and remind the world that it shouldn’t be up to Native women to prove their innocence before crimes against them are investigated. It was also about healing myself and sparking healing for all Native women. I carry these stories, but they are not mine. The project has its own energy and my job is just to facilitate its movement. I can’t undo these crimes, but if we can open conversations about the root causes of violence that are honest and do not minimize the effects of violence, then the project is worth doing. The project has been ongoing for the last 18 months. With the larger qaspeq, I’m hoping that my efforts will also honor the advocacy work happening all over North America. This work has been driven by the efforts of Native women and it’s important to acknowledge that. Visibility is a step toward changing social attitudes. It has been featured on Alaska channels 2 and 11, the Juneau Empire, First Alaskans magazine, First Americans magazine, and was present during testimony in Juneau for HR 10 in support of Savanna’s Act and continued funding for VAWA. The resolution passed unanimously.—Amber Webb, Creator of the Memorial Qaspeq. 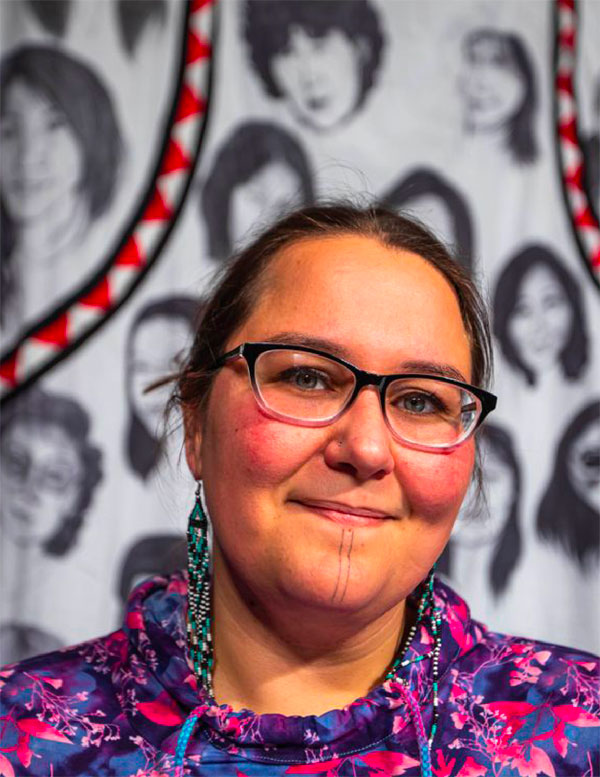 Yup’ik artist Amber Webb stands with her 12-foot qaspeq Thursday, Oct. 17, 2019 during the Alaska Federation of Natives convention at the Carlson Center in Fairbanks. Webb made the qaspeq, which displays portraits of over 200 Alaskan, Canadian, and Native American Murdered Indigenous Women and Girls. Webb received the 2019 Dr. Walter Soboleff “Warriors of Light” award from AFN. (Photo courtesy of Loren Holmes / ADN).