The thematic hearing was well attended. “Although the hearing was only an hour, the Commission strongly expressed interest in learning more about violence against indigenous women in the United States, particularly the urgent situation of Alaska Native women and of missing and murdered Native women,” said Jana Walker, Senior Attorney at the Indian Law Resource Center. “The fact that Commissioner Garcia called the high level of violence against Alaska Native women ‘astonishing’ shows just how important continued public outreach about this issue is. Alaska Native women experience the highest rates of assault and violence in the United States and almost no one knows about it.” “Significantly, President Macauly assured our delegation that the Commission will continue to monitor the situation,” said Chris Foley, Attorney, Indian Law Resource Center. “We are responding to questions the Commission raised at the hearing and sending additional information to enhance the Commission’s reporting in the future, which can help spur federal action on this crisis."

The Commission has now released its report on its 169th Session and a summary of the thematic hearing. The summary notes that the Commission “asked the U.S. authorities to take appropriate measures to fully understand the causes of this phenomenon and comply with their obligation to prevent such crimes against women.” Video of the hearing and copies of materials submitted to the Commission by Alaska Native Women’s Resource Center, Indian Law Resource Center, National Congress of American Indians, and National Indigenous Women’s Resource Center are available at https://goo.gl/sgf6h8. The Commission’s summary is available at https://goo.gl/EHFJN1.

The Commission is an autonomous body of the Organization of American States (OAS), a regional organization consisting of 35 countries, including the United States. The Commission promotes respect for human rights and defends these rights within the Americas. It holds thematic hearings to investigate human rights concerns.

UN Commission on the Status of Women

The UN Commission on the Status of Women (CSW) will meet in New York from March 11-22 for its 63rd Session. The CSW’s priority theme this year is “Social protection systems, access to public services and sustainable infrastructure for gender equality and the empowerment of women and girls.” In addition to the discussions on the official agenda, there are a large number of side events and parallel events that take place in the UN and in nearby off-campus venues as part of the CSW’s session. These programs, sponsored by non-profit organizations, UN offices, and UN member states, address a broad range of women’s rights issues. In most years there are several programs related to indigenous women’s rights. Details about the CSW and side events can be found at https://goo.gl/1NCCVp. Details about parallel events will be posted at https://www.ngocsw.org. If you would like to attend the CSW and need help with the free registration, please contact the Indian Law Resource Center at mt@indianlaw.org and we can help guide you.

The UN Permanent Forum on Indigenous Issues, an advisory body to the UN Economic and Social Council, will hold its 19th Session in New York from April 22-May 3, 2019. This year’s theme is “Traditional knowledge: Generation, transmission and protection.” Among other matters, the Permanent Forum is expected to release a report on “good practices in addressing violence against indigenous women and the impact of grassroots movements in achieving national action” in North America.

Registration is required to attend meetings of the Permanent Forum, but it is free and will open in early 2019. Details about this and the agenda will be posted online over the coming months at https://goo.gl/G8c7bm.

Consideration continues on how to enhance indigenous peoples participation at the UN: Occurring on the sidelines of the Permanent Forum’s meeting will be the second informal interactive hearing with the UN President of the General Assembly to discuss how to improve indigenous participation within the UN. For those of us here in the United States, this UN discussion is about creating a status for our tribal governments that recognize tribal sovereignty and acknowledges the leading role our governments should play in international advocacy about critical issues such as eliminating violence against women and girls. It is essential that tribal governments be able to participate directly in UN meetings on issues affecting them, and robust advocacy from tribal leaders and other advocates is necessary to convince the UN to act on this matter. For more information on the history of this issue in the United Nations, see https://goo.gl/ojRM8h. 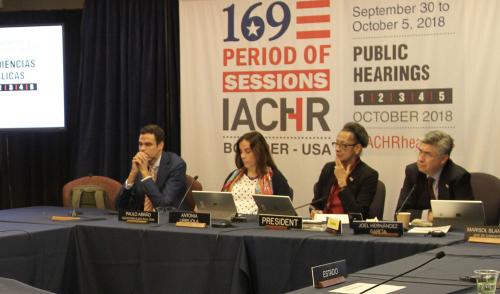