Conversation With the Field: Highlighting and Supporting Indigenous Women’s Sacred Ties to Their Homelands and Culture as a Protective Factor

Rosemond K. Pettigrew, Board President, Pouhana O Nā Wāhine sharing her perspective on Indigenous women’s sacred ties to their homelands and culture as a protective factor.

The National Indigenous Women’s Resource Center (NIWRC) policy team held a Conversation With the Field (CWTF) with a diverse group of grassroots advocates, Tribal coalitions, and staff from various Tribal organizations to highlight Indigenous Women’s sacred ties to their homelands and to discuss culture as a protective factor. Developed by the NIWRC in the early 2000s, the CWTF is an important tool for organizing national dialogue to inform and develop a national platform of current and emerging issues of concern and recommendations to increase the safety of victim-survivors of domestic violence and gender-based violence. The team was also joined by Rosemond (Loke) Pettigrew (founding member of the Pouhana O Nā Wāhine) and Christopher Foley (Indian Law Resource Center) to provide their insight and wisdom regarding the sacredness and connection of Indigenous women to their homelands.

To directly correlate with our work, this CWTF was specifically designed to elaborate on point six of NIWRC’s Advocacy in Action: Restoring Safety of Indigenous Women. In close collaboration with our National Partners, the NIWRC developed the 6-Point Action Plan, with point six recognizing that both land and Indigenous women are sacred and connected and that both require legislative and policy actions to protect them from violence, such as the passage of the Save Oak Flat legislation, HR 1884/S.915.

Conversation With the Field

In the July CWTF, the session’s overview began by recognizing the spiritual connection of Indigenous women to the land, further highlighting the 6-Point Action Plan, acknowledging that traditionally, Indigenous women were respected and held sacred within their nations. However, with colonization, the current spectrum of violence against Indigenous women ties directly to the layers of systemic barriers embedded within the U.S. federal government. These barriers developed as the U.S. seized the homelands and natural resources of Indigenous peoples who were forcibly removed and relocated, which further exacerbated living conditions leaving Native women vulnerable to violence. To fully address the current crisis of violence against Indigenous women, we must have conversations with advocates, first responders, leaders, and family members to inform our work and further help remove the systemic barriers to restore the sacred status of Indigenous women.

The overview acknowledged that our identity and our sovereignty are tied to maintaining the sacred connection with Mother Earth including the important ceremonies where the land and water/natural resources are integral and sacred and therefore require protection. To further facilitate conversation and dialogue following the brief overview, the team opened up the space for sharing and discussion. The team posed several questions to help start the dialogue, including 1) In your view, can you share about this connection of protecting the land and protecting Native women? What does culture as a protective factor mean to you? 2) There are a lot of people who do not understand this connection and are still learning about the sacredness of ceremonies, and protections within Indigenous cultures and traditions. What would you say to people who may not understand these connections? What do you want them to hear, understand, respect and honor? 3) What are you doing now or plan to do after our CWTF to support Indigenous communities’ struggles to protect their homelands and women? How can other people/organizations/partnerships support your efforts?

To appropriately ground ourselves, our relative, Loke shared among other critical teachings, that central to Native Hawaiian culture is the relationship of everyone with one another through the land. “We’re connected through the aina because Hawaii is our home,” Loke said. And like American Indian and Alaska Native (AI/AN) women, Native Hawaiian women, like their land, have been subjected to alarmingly high rates of violence, trauma, and assault since colonization and into the present day. Their call or Kahea for unity and change reflects that “the life of the land is in its people,” Loke said, quoting the Native Hawaiian writer Dana Naone Hall. “If your people need healing and need to be taken care of, you have to take care of your land. If you don’t take care of your land, you can’t take care of your people.”

The much-needed conversation brought out many teachings and wisdom about the sanctity in which we uphold the land, as one person commented, “we draw our strength from our land. It protects us and we give back.” An important reminder was raised about how the land plays a part in why Indigenous women do not leave abusive relationships. She shared that “our connection to the land hinders our desire to leave our lands to go off into an unknown world even for our own safety. We find comfort in what we know and are linked to versus going out and leaving our abuse.” To this, a relative who works with survivors of intergenerational trauma noted the importance of land to help in personal healing and recognized that our land including trees, medicines, water, air, and fire all serve as paths to healing.

“We must continue to honor and reclaim our respected values and kinship systems to promote safety and protections for Indigenous women including the lands, waterways, and medicines that carry us forward in our healing and lifeways.”
—Rose M. Lashawaat Quilt, Yakama, Director of Policy and Research, NIWRC

As the stories echoed throughout our virtual circle, we were reminded that as relatives, we were participating in a ceremony and ceremony is about thanking what has been given to us from the Creator and Mother Earth. She shared that in ceremony, a circle of people are connected and that it takes us all to mend the broken/disconnected circles. Such ceremonies to heal our homelands and our Indigenous women are long overdue.

Near the close of the conversation, Christopher Foley (ILRC) shared with us how international human rights law has helped Indigenous women and other countries in advancing protections and guarantees of the rights of Indigenous peoples and protections of their homelands. He also shared how the climate crisis has impacted Indigenous women including how climate change increases and fuels violence against them. For example, when unsustainable development takes and damages Indigenous land and resources, whether through extraction, deforestation, environmental degradation, tourism, and other related activities, it not only contributes to global climate instability but also adversely impacts Indigenous women and their communities and increases their vulnerability to violence. However, as Christopher shared through international forums and documents such as the Universal Declaration of Human Rights, many of our Indigenous relatives are advocating for their protection, survival, and well-being, including the rights of Mother Earth.

“As the stories echoed throughout our virtual circle, we were reminded that as relatives, we were participating in ceremony and ceremony is about thanking what has been given to us from the Creator and Mother Earth.”
—Rose M. Lashawaat Quilt, Yakama, Director of Policy and Research, NIWRC

The overarching theme among the July CWTF circle is that the relationship between Indigenous people and the land is one of reciprocity and respect - the land sustains and provides for the people, and the people sustain and manage it as

stewards moving on and in it with respect, sacredness, culture, and ceremony. Because of this close connection, when the land is disrespected, damaged, or destroyed, this can have a real impact on the well-being of Indigenous people including the safety of Indigenous women. Therefore, we must continue to honor and reclaim our respected values and kinship systems to promote safety and protection for Indigenous women including the lands, waterways, and medicines that carry us forward in our healing and lifeways.

As we continue to be challenged with an unpredictable pandemic and a climate crisis, this CWTF was not only welcomed with much gratitude but came with recommendations to hold additional conversations to delve deeper into culture as a protective factor and how the collective can inform recommendations for the 6-Point Action Plan recognizing that both land and Indigenous women are sacred and connected and that both require legislative and policy protections. 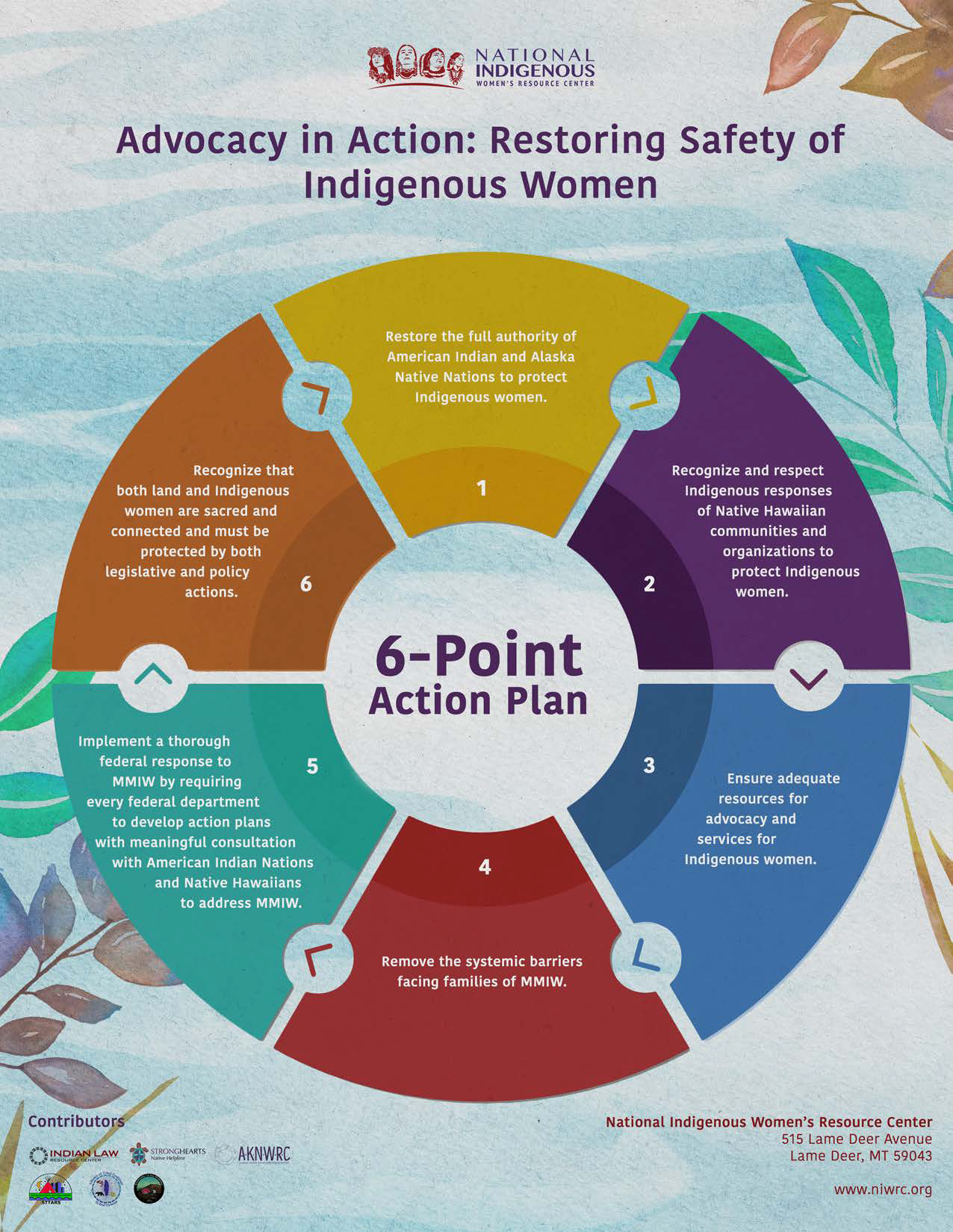 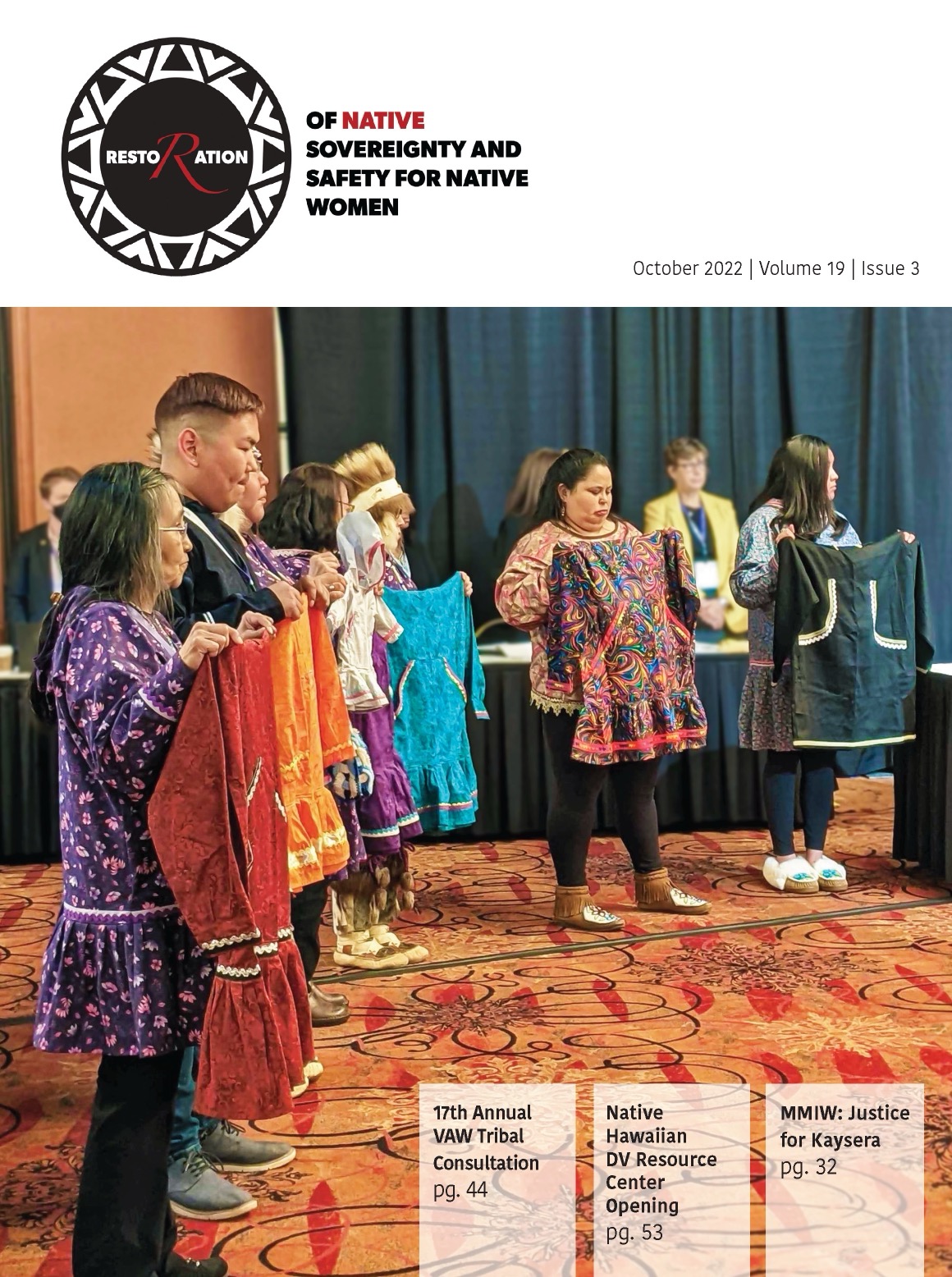