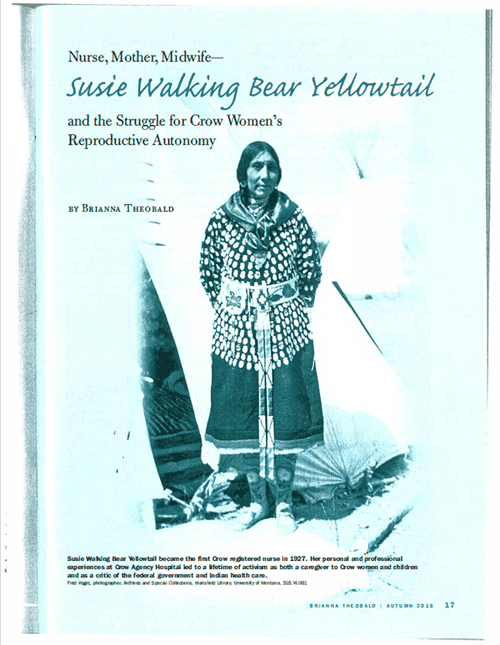 Written by Brianna Theobald. Coercive sterilization of Indigenous women at Crow Agency, and the activism of Indigenous women, has a longer history than scholars have recognized. In the late 1920s and 1930s, Susie Walking Bear Yellowtail, the first Crow registered nurse, and other Crow women charged hospital personnel with violations of their reproductive rights, including cases of coercive ster­ilization. The experiences of Yellowtail and other Crow women suggest that the American eugenics movement had grave consequences on reservations such as the Crow and demand further research into the linkages between early twentieth-century eugen­ics and the "neo-eugenics" of the 1960s and 1970s. For her part, Yellowtail's personal and professional experiences in the late 1920s and 1930s spurred a lifetime of activism as both employee and critic of the federal government and Indian health care. Her story, then, offers a point of entry into this history, and demands the recognition of yet another dimension of the twentieth-century struggle for tribal sovereignty­, one in which Native women played the central role.