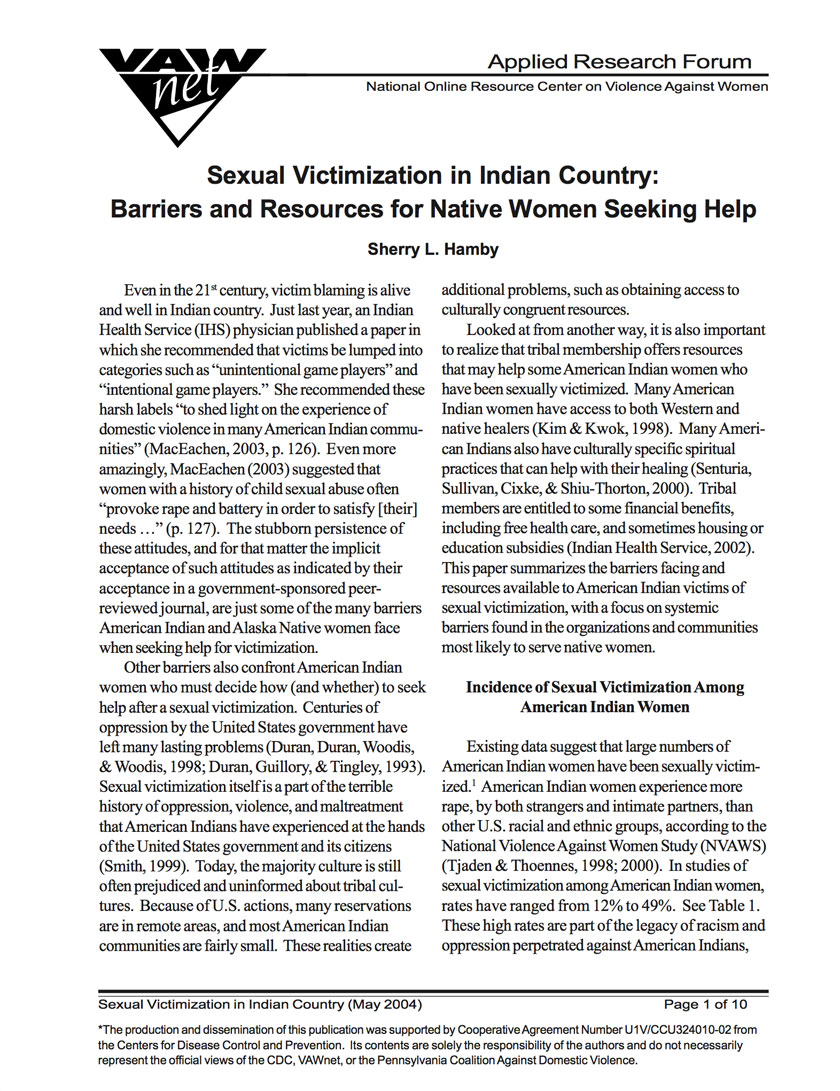 Even in the 21st century, victim blaming is alive and well in Indian country. Just last year, an Indian Health Service (IHS) physician published a paper in which she recommended that victims be lumped into categories such as “unintentional game players” and “intentional game players.” She recommended these harsh labels “to shed light on the experience of domestic violence in many American Indian communities” (MacEachen, 2003, p. 126). Even more amazingly, MacEachen (2003) suggested that women with a history of child sexual abuse often “provoke rape and battery in order to satisfy [their] needs …” (p. 127). The stubborn persistence of these attitudes, and for that matter the implicit acceptance of such attitudes as indicated by their acceptance in a government-sponsored peerreviewed journal, are just some of the many barriers American Indian and Alaska Native women face when seeking help for victimization.

Other barriers also confront American Indian women who must decide how (and whether) to seek help after a sexual victimization. Centuries of oppression by the United States government have left many lasting problems (Duran, Duran, Woodis, & Woodis, 1998; Duran, Guillory, & Tingley, 1993). Sexual victimization itself is a part of the terrible history of oppression, violence, and maltreatment that American Indians have experienced at the hands of the United States government and its citizens (Smith, 1999). Today, the majority culture is still often prejudiced and uninformed about tribal cultures. Because of U.S. actions, many reservations are in remote areas, and most American Indian communities are fairly small. These realities create additional problems, such as obtaining access to culturally congruent resources.

Looked at from another way, it is also important to realize that tribal membership offers resources that may help some American Indian women who have been sexually victimized. Many American Indian women have access to both Western and native healers (Kim & Kwok, 1998). Many American Indians also have culturally specific spiritual practices that can help with their healing (Senturia, Sullivan, Cixke, & Shiu-Thorton, 2000). Tribal members are entitled to some financial benefits, including free health care, and sometimes housing or education subsidies (Indian Health Service, 2002). This paper summarizes the barriers facing and resources available to American Indian victims of sexual victimization, with a focus on systemic barriers found in the organizations and communities most likely to serve native women.

From the Roots Up