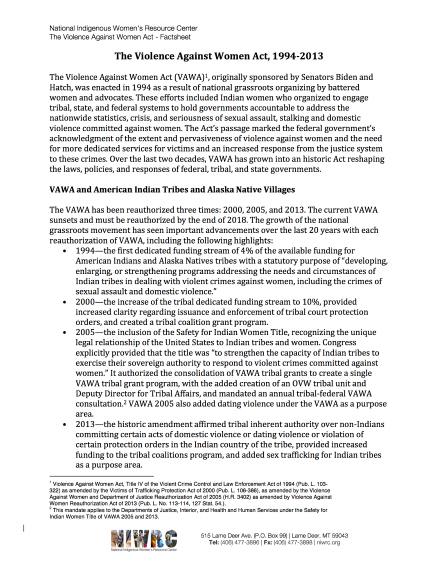 The Violence Against Women Act (VAWA), originally sponsored by Senators Biden and Hatch, was enacted in 1994 as a result of national grassroots organizing by battered women and advocates. These efforts included Indian women who organized to engage tribal, state, and federal systems to hold governments accountable to address the nationwide statistics, crisis, and seriousness of sexual assault, stalking and domestic violence committed against women. The Act’s passage marked the federal government’s acknowledgment of the extent and pervasiveness of violence against women and the need for more dedicated services for victims and an increased response from the justice system to these crimes. Over the last two decades, VAWA has grown into an historic Act reshaping the laws, policies, and responses of federal, tribal, and state governments.