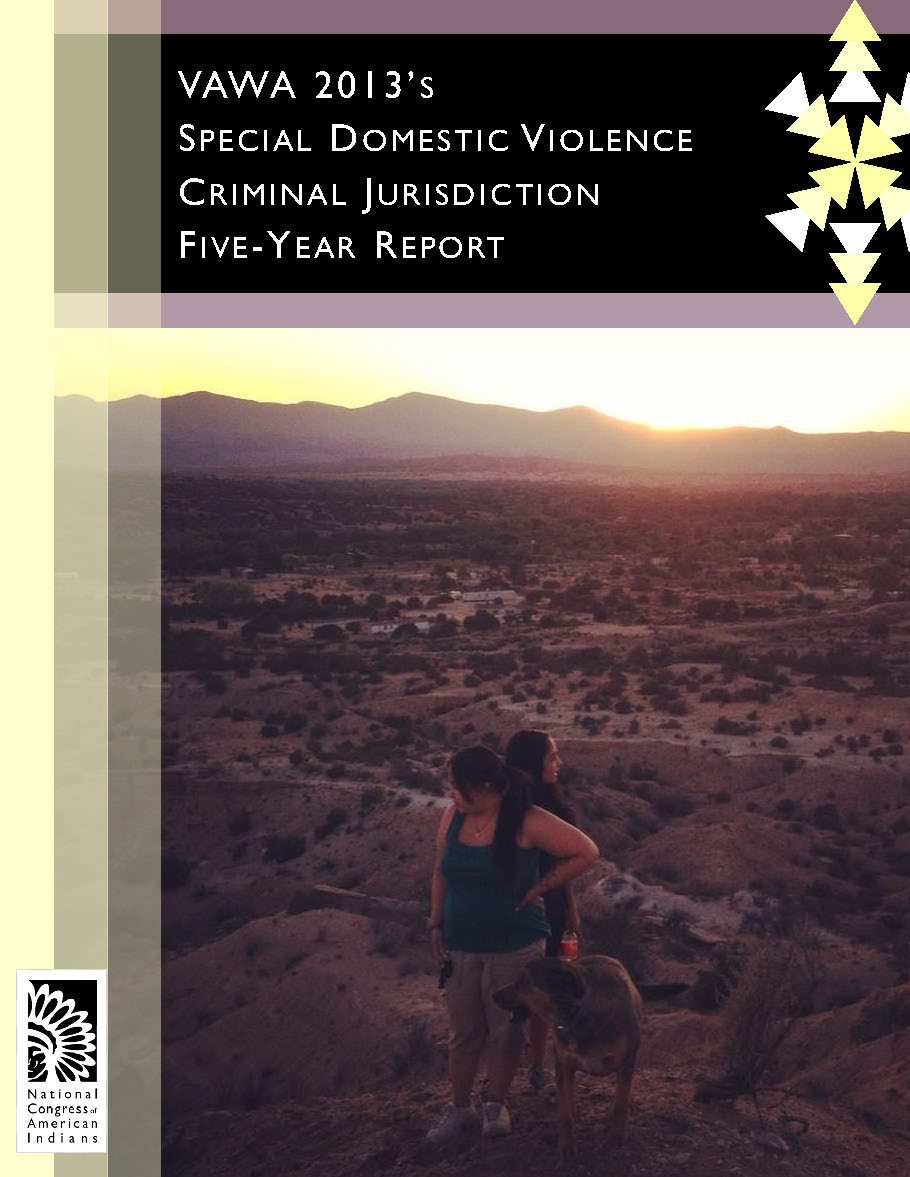 EXECUTIVE SUMMARY
Five years ago, Congress passed the Violence Against Women Reauthorization Act of 2013 (VAWA 2013).2 In response to the high rates of domestic violence being perpetrated against American Indian and Alaska Native women by non-Indian men,i and harrowing stories from victims whose abusers seemed out of justice’s reach, the law contained a new provision. VAWA 2013 recognized and affirmed the inherent sovereign authority of Indian tribal governments to exercise criminal jurisdiction over certain non-Indians who violate qualifying protection orders or commit domestic or dating violence against Indian victims on tribal lands.3 This provision in VAWA 2013 created a framework for tribal courts to prosecute non-Indians again—something that had not happened in 35 years, since the U.S. Supreme Court decision in Oliphant v. Suquamish Tribe, which removed tribal authority to prosecute non-Indians.4

VAWA 2013’s limited reaffirmation of inherent tribal criminal jurisdiction over non-Indians, known as Special Domestic Violence Criminal Jurisdiction (SDVCJ), has fundamentally changed the landscape of tribal criminal jurisdiction in the modern era. By exercising SDVCJ, many communities have increased safety and justice for victims who had previously seen little of either. SDVCJ has allowed tribes to “respond to long-time abusers who previously had evaded justice”5 and has given a ray of hope to victims and communities that safety can be restored.

To date, 18 tribes are known to be exercising SDVCJ (throughout this report these tribes are referred to collectively as “implementing tribes”).ii Tribes are implementing SDVCJ with careful attention to the requirements of federal law and in a manner that upholds the rights of defendants. In order to exercise SDVCJ, tribes must comply with a series of federal statutory requirements that include, among other things, providing certain due process protections to non-Indian defendants.6 Most of these implementing tribes have worked closely with a group of over 50 other tribes as part of an Inter-tribal Technical-Assistance Working Group (ITWG) on SDVCJ that has been an important forum for tribal governments to work collaboratively to develop best practices.

To date, the implementing tribes report 143 arrests of 128 non-Indian abusers. These arrests ultimately led to 74 convictions, 5 acquittals, and 24 cases currently pending. There has not been a single petition for habeas corpus review brought in federal court in an SDVCJ case. Although preliminary, the absence of habeas petitions suggests the fairness of tribal courts and the care with which tribes are implementing SDVCJ.

Implementation of SDVCJ has had other positive outcomes as well. For many tribes, it has led to much-needed community conversations about domestic violence. For others it has provided an impetus to more comprehensively update tribal criminal codes. Implementation of SDVCJ has also resulted in increased collaboration among tribes and between the local, state, federal, and tribal governments. It has revealed places where federal administrative policies and practices needed to be strengthened to enhance justice, and it has shown where the jurisdictional framework continues to leave victims—including children and law enforcement—vulnerable. Implementation thus far has also revealed that additional resources are necessary in order for the benefits of the law to expand to more reservations.

This report summarizes how VAWA 2013’s landmark provision has been implemented and analyzes its impacts in the 5 years since it was enacted.iii This examination of the tribes’ early exercise of SDVCJ suggests that VAWA 2013 has been a success. As Congress intended, the law has equipped tribes with the much-needed authority to combat the high rates of domestic violence against Native women, while at the same time protecting non-Indians’ rights in impartial, tribal forums.7

The report begins in Section I with a brief overview of the need for the tribal provisions in VAWA 2013 and the context for their passage. It then provides in Section II, an overview of nationwide SDVCJ prosecution statistics and analyzes tribal experiences exercising SDVCJ over the past four years. It identifies four key findings, which are as follows:

1. Tribes use SDVCJ to combat domestic violence by prosecuting offenders harming their communities
1-1. Non-Indian perpetrated domestic violence is a real problem
1-2. Many defendants have numerous prior contacts with tribal police, demonstrating SDVCJ can end impunity
1-3. Many SDVCJ defendants have criminal records or outstanding warrants
1-4. A diverse array of tribes have successfully implemented SDVCJ
2. Tribal courts uphold the rights of defendants and are committed to their rehabilitation
2-1. SDVCJ case outcomes demonstrate fairness
2-2. Tribes are invested in helping defendants get the help they need
3. Implementation revealed serious limitations in the law
3-1. The statute prevents tribes from prosecuting crimes against children
3-2. The statute prevents tribes from prosecuting alcohol and drug crimes
3-3. The statute prevents tribes from prosecuting crimes that occur within the criminal justice system, thereby endangering law enforcement and undermining the integrity of the system
3-4. There was initial confusion concerning the scope of the federal statutory definition of “domestic violence”
3-5. SDVCJ is prohibitively expensive for some tribes
3-6. Detention issues and costs create implementation challenges
3-7. SDVCJ is jurisdictionally complex
4. SDVCJ implementation promotes positive changes
4-1. SDVCJ promotes positive tribal reforms
4-2. Inter-tribal collaboration creates successes beyond SDVCJ
4-3. SDVCJ promotes better relationships with other jurisdictions

Following the findings in Section II, Section III provides an overview of the requirements of those provisions and how they are structured. After supplying this context on the law, Section IV includes brief profiles of the 18 implementing tribes, including individual prosecution statistics. Finally, Section V examines the diversity in how tribes have chosen to meet the statutory requirements of VAWA 2013 and illustrates how the statute has allowed tribes to implement SDVCJ differently depending on the needs and values of their communities. The appendices to this report include resources on implementation of SDVCJ and other materials that may be of interest.

i See infra Section I.
ii Since the end of the pilot period, tribes are not required to notify the U.S. Department of Justice if they begin exercising SDVCJ. This report covers the 18 implementing tribes that have reported implementation to the National Congress of American Indians and its partner technical assistance providers, although it remains a possibility that there are other tribes implementing SDVCJ.
iii Although VAWA 2013 was enacted 5 years ago, the SDVCJ provision took effect as a Pilot Project 1 year later and became effective nationwide in March of 2015.