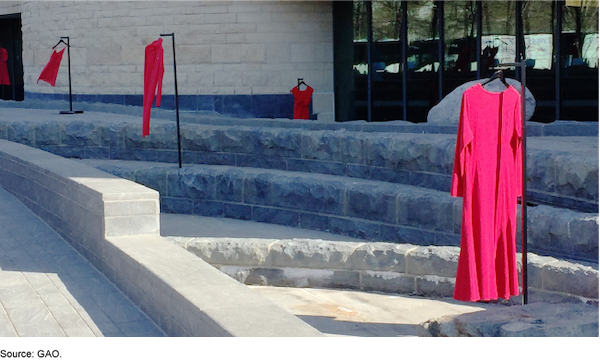 An art installation at the National Museum of the American Indian (2019) intended to draw attention to violent crimes against Indigenous women. Photo credit: GAO

According to researchers, American Indian and Alaska Native (AI/AN) women in the U.S. experience higher rates of violence than most other women, and tribal and federal officials have stated that this incidence of violence constitutes a crisis. Various federal officials and tribal stakeholders have raised concerns about challenges with cross-jurisdictional cooperation and a lack of comprehensive national data on cases. The Government Accountability Office (GAO) was asked to review the federal response to the missing or murdered AI/AN women crisis. This report examines the extent to which (1) the number of missing or murdered AI/AN women in the U.S. is known and (2) the Department of Justice and Department of Interior have taken steps to address the crisis.

Human Rights Day in Honor of Tillie Black Bear: Opening Those Closed Doors - Advocacy and Actions, We Must

Youth Magazine: Relationships | Healthy, Unhealthy, When There is Danger

NIWRC 10-Year Anniversary: Carrying Our Medicine Forward - A Decade of Lifting the Movement of Safety for Native Women