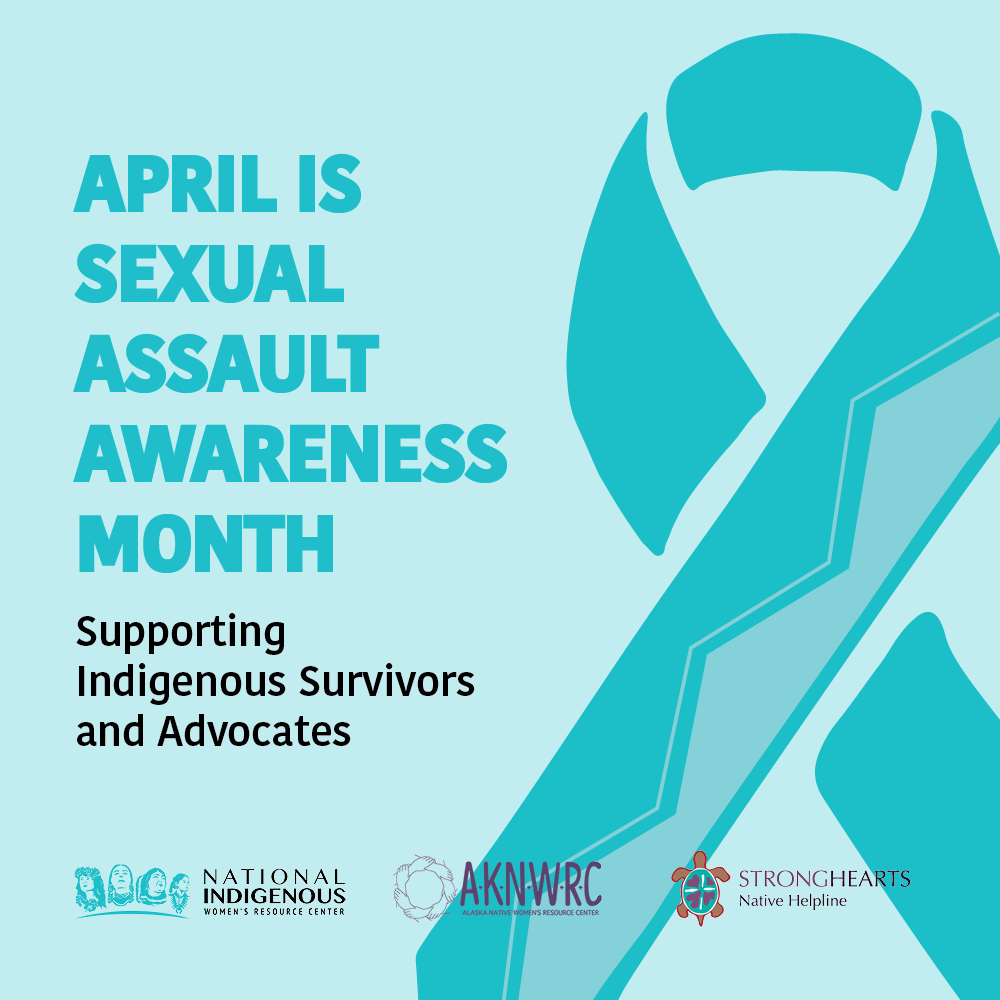 This April, StrongHearts Native Helpline, the National Indigenous Women’s Resource Center, and the Alaska Native Women’s Resource Center recognize Sexual Assault Awareness Month (SAAM) by raising awareness of sexual assault and supporting victim-survivors of sexual violence. Rape and sexual assault are never the victim’s fault. It is crucial that we recognize sexual violence as part of the continuum of violence against Indigenous peoples, and that it is interwoven with colonization, intimate partner violence, missing and murdered Indigenous women (MMIW), trafficking and extractive industries.

Sexual violence is not traditional. It is a tool and result of colonization, which is responsible for the theft, occupation, resource extraction and exploitation of Native lands that continues to this day. Today, Native Americans who are living in Tribal communities on or near lands that are exploited by extractive industries face the highest rates of sexual violence. Culturally, we view any attack on the land—our Mother Earth—as an attack on the lives and bodies of Indigenous peoples. The same government infrastructure—federal laws, policies, and institutions—targeting and permitting sexual assault, abuse, and harassment of Native women in the 1800s continues to exist in 2022. Removing these structural inequalities requires awareness and transformative action in understanding and advancing changes to end sexual violence. For decades, Indigenous advocates—often survivors themselves—have challenged systemic barriers, policies, and laws permitting such abuse to make our communities safer.

The experiences and voices of Native survivors of violence are often ignored and disregarded, leaving many of our relatives without access to medical care, justice, supportive services, and healing. Survivors often do not report sexual assault or seek help out of shame, embarrassment, or fear of retaliation by the person who assaulted them. Additionally, Native survivors can experience jurisdictional hurdles when they report a crime, and oftentimes, the reports do not result in investigations, prosecution, or convictions.

During Sexual Assault Awareness Month, we join together as relatives to support Indigenous survivors of sexual violence and advocates.

What is Sexual Assault?

Sexual assault is any type of sexual activity or contact that you do not consent to. It may occur within an intimate relationship as a tactic of domestic violence. Sexual assault is a type of sexual violence and is rooted in power and control, a way for perpetrators to instill fear into victims. Forced sexual acts cause great trauma and harm people physically, spiritually, mentally, and emotionally.

The trauma of a sexual attack on one’s spirit and wellbeing can last a lifetime, particularly if safety, support, and culturally based resources for healing aren't accessible. We know that these services are often not readily available in Tribal and Native communities. For relatives who are hurting, StrongHearts Native Helpline (1-844-762-8483, strongheartshelpline.org) provides peer support and a connection to services as a nationally available domestic, dating, and sexual violence helpline designed by and for Native people.

Below you will find more information about Sexual Assault Awareness Month and advocacy resources on sexual assault.

StrongHearts Native Helpline was created by and built to serve tribal communities across the United States. It is a culturally-appropriate, anonymous, confidential and free service dedicated to serving Native American and Alaska Native survivors, concerned family members and friends affected by domestic, dating and sexual violence. Dial 1-844-7NATIVE (1-844-762-8483) or click on the chat now icon at strongheartshelpline.org 24/7. Connect with knowledgeable advocates who can provide lifesaving tools and immediate support to enable survivors to find safety and live lives free of abuse. StrongHearts Native Helpline is a proud partner of the National Indigenous Women’s Resource Center and the National Domestic Violence Hotline. Learn more at strongheartshelpline.org.

Organized in 2015, the AKNWRC is a tribal nonprofit organization dedicated to ending violence against women with Alaska’s 229 tribes and allied organizations. AKNWRC board members are Alaska Native women raised in Alaska Native Villages and have over 153 years of combined experience in tribal governments, nonprofit management, domestic violence, and sexual assault advocacy (both individual crisis and systems and grassroots social change advocacy at the local, statewide, regional, national and international levels), and other social services experience. aknwrc.org