State of Alaska Task Force on the Crime of Human Trafficking, Promoting Prostitution and Sex Trafficking 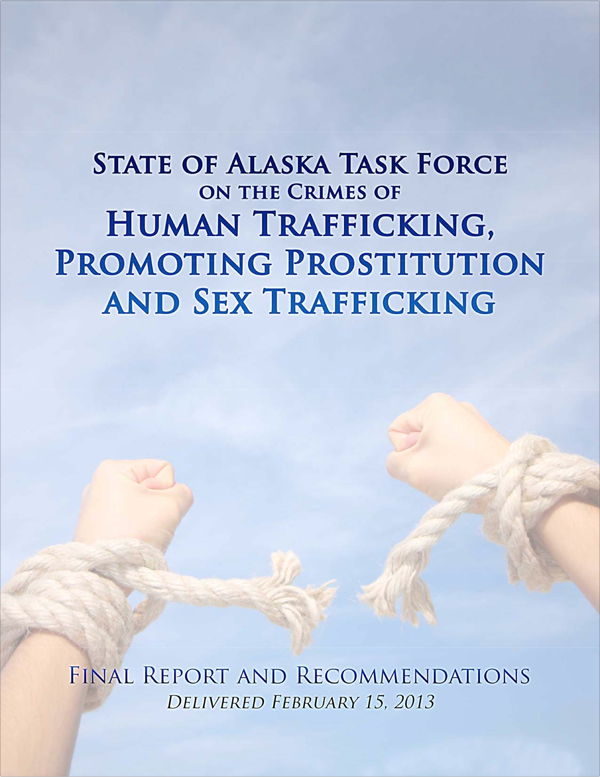 The State of Alaska Task Force on the Crimes of Human Trafficking, Promoting Prostitution and Sex Trafficking was established by legislation in 2012 to do the following: (1) look at the prevalence of the crimes of human trafficking and sex trafficking in Alaska; (2) assess the current services available to victims of human and sex trafficking; and (3) make recommendations for ways to further assist victims. This report is the final culmination of the task force’s work and includes the task force’s final recommendations.

The task force met over the course of five months and held three public hearings in Anchorage, Bethel and Hooper Bay. In addition to hours of testimony and some written comments, the task force also received background information from its staff to gain a better understanding of services available throughout the state and the prevalence of the issue in Alaska. Although the task force received a lot of information, it found that there are also a lot of gaps in information due to the underground nature of the crime and the tendency of trafficking victims not to self-report. Therefore, many of the task force’s recommendations focus on how to better identify victims and public awareness of human trafficking.

From the Roots Up