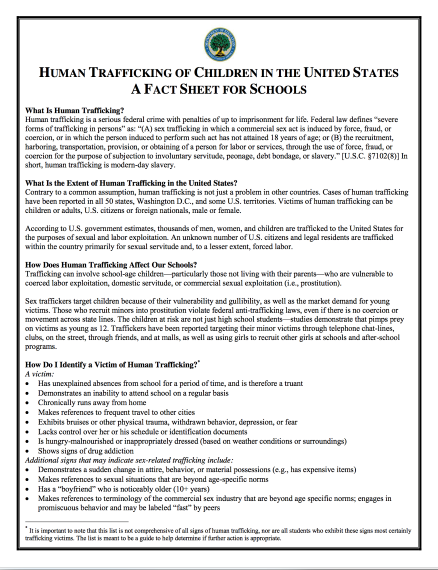 What Is Human Trafficking?
Human trafficking is a serious federal crime with penalties of up to imprisonment for life. Federal law defines “severe forms of trafficking in persons” as: “(A) sex trafficking in which a commercial sex act is induced by force, fraud, or coercion, or in which the person induced to perform such act has not attained 18 years of age; or (B) the recruitment, harboring, transportation, provision, or obtaining of a person for labor or services, through the use of force, fraud, or coercion for the purpose of subjection to involuntary servitude, peonage, debt bondage, or slavery.” [U.S.C. §7102(8)] In short, human trafficking is modern-day slavery.

According to U.S. government estimates, thousands of men, women, and children are trafficked to the United States for the purposes of sexual and labor exploitation. An unknown number of U.S. citizens and legal residents are trafficked within the country primarily for sexual servitude and, to a lesser extent, forced labor.

How Does Human Trafficking Affect Our Schools?
Trafficking can involve school-age children—particularly those not living with their parents—who are vulnerable to coerced labor exploitation, domestic servitude, or commercial sexual exploitation (i.e., prostitution).

Sex traffickers target children because of their vulnerability and gullibility, as well as the market demand for young victims. Those who recruit minors into prostitution violate federal anti-trafficking laws, even if there is no coercion or movement across state lines. The children at risk are not just high school students—studies demonstrate that pimps prey on victims as young as 12. Traffickers have been reported targeting their minor victims through telephone chat-lines, clubs, on the street, through friends, and at malls, as well as using girls to recruit other girls at schools and after-school programs.

Accountability is a Requirement for Safety and Change