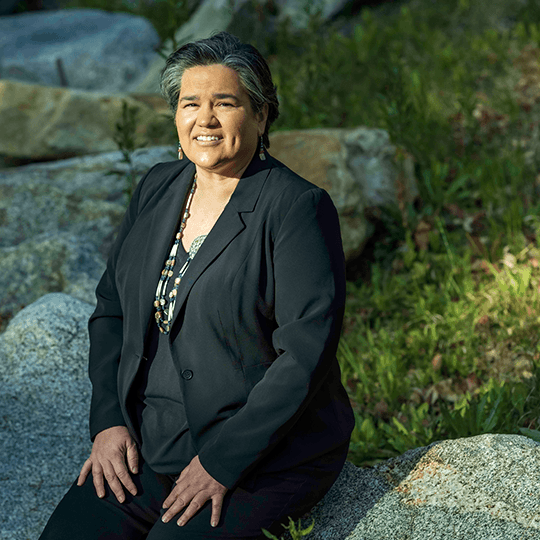 Wendy Schlater is a dual citizen of the La Jolla Band of Luiseno Indians and the U.S. In March 2019, Wendy was elected Vice Chairwoman for her Tribe, her third term as an elected tribal leader. Wendy also serves as Program Director of La Jolla’s Avellaka Program addressing safety for Native women on her Reservation. In this capacity, she organized the La Jolla Native Women’s Advisory Committee to host the first annual Inter-Tribal Sexual Assault Awareness Walk in 2010, which continues today traveling from reservation to reservation. One of Wendy’s passions is to assert and utilize tribal sovereignty to bring much needed services to her people.  Wendy is also a member of the San Diego County Sexual Assault Response Team Committee and a Tribal Subcommittee member of the Violence Against Women Act Committee. Wendy is a founding Board member of a non-profit tribal coalition, the Strong Hearted Native Women’s Coalition and the National Indigenous Women’s Resource Center, for which she currently serves as NIWRC’s Board of Directors’ Treasurer. NIWRC is a national tribal nonprofit dedicated to restoring tribal sovereignty to increase Native women’s safety. Throughout her career, she has advocated for Native LGBTQ/2Spirit youth and adults, tribal youth, health, education, land, environmental issues and safety for Native women, developing innovative ways to create Tribal responses and programs respective of her people’s customs and traditions.