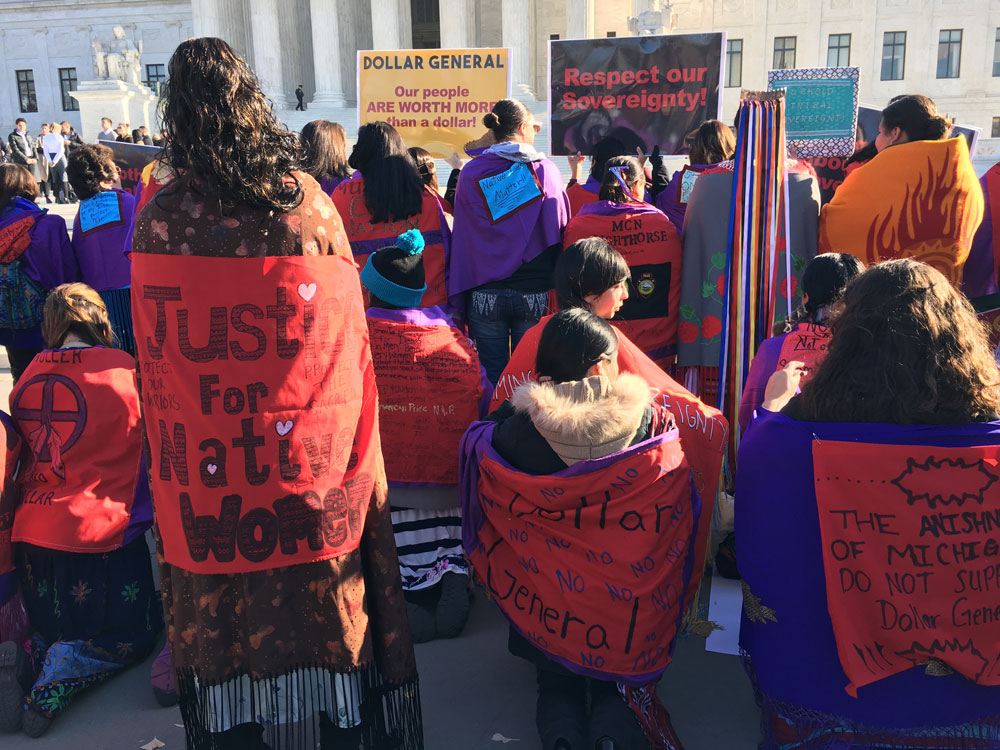 The National Indigenous Women’s Resource Center (“NIWRC”), a leading advocate against domestic violence in Indian Country, participated in the Supreme Court case as amicus curiae and filed a brief to preserve the inherent sovereign authority of American Indian Nations to protect their women and children living on tribal lands. NIWRC’s amicus brief was joined by 104 additional organizations that share NIWRC’s commitment to ending domestic violence, rape, sexual assault, and other forms of violence in the United States.

“The Supreme Court’s decision today upholds tribal sovereignty and as well as the inherent authority of Tribes to exercise civil jurisdiction over actions that occur on tribal lands,” said Lucy Simpson, Executive Director of the NIWRC. “In this instance, a tribal youth suffered at the hands of a Dollar General store manager, and as a result of today’s decision, he doesn’t have to leave his home to seek justice, but can instead continue with his lawsuit in the court of his Nation.”

On December 7, 2015, the day of the argument, hundreds of Native women, men, children, and allies stood outside the Supreme Court to speak in support of tribal jurisdiction.  “We prayed for jurisdiction,” states Diane Millich, a survivor of non-Indian perpetrated domestic violence whose story of survival appeared in the New York Times in 2013. “We prayed for our children.”

“A lot was at stake here,” explains Cherrah Giles, President, Board of Directors for NIWRC. “Our Native women and children face rates of sexual assault and abuse higher than any other population in the United States. The majority of these assaults are committed by non-Indians. So it would be horrific to tell our Tribes they can no longer protect their women and children from the majority of individuals assaulting them.” The latest study published by the National Institute of Justice in May 2016 reports that more than 4 out of 5 Native women and men, respectively, have suffered violence in their lifetime. The DOJ has reported that 67% of violent assaults committed against American Indians are committed by non-Indians.

“Dollar General asked for nothing less than the complete eradication of tribal jurisdiction,” states Mary Kathryn Nagle, Partner at Pipestem Law, PC, and counsel to NIWRC. “Today’s decision is a victory for Tribal Governments who, for hundreds of years, have fought tirelessly to maintain the inherent sovereignty necessary to protect their women and children from those who seek to assault them.”

“Today’s decision is a victory for all of us, but we have so much more work to do to ensure the safety of our Native woman and children,” states Deborah Parker, Member of NIWRC’s Board of Directors. “Because of Oliphant, Indian Nations cannot criminally prosecute the people who sexually assault their children. We celebrate this decision, but we also urge the Supreme Court to uphold the Violence Against Women Act (VAWA) special jurisdiction over non-Indians.”

“We call on Congress to fully restore our Tribes’ jurisdiction,” states Wendy Schlater, Member of NIWRC’s Board of Directors. “Until our Tribal Governments can exercise their inherent sovereignty to protect all of us, none of us are safe.”

Dollar General appealed the Fifth Circuit decision to the Supreme Court, arguing that Tribes should be stripped of all civil jurisdiction over nonmembers unless the nonmember gives explicit consent to the jurisdiction.

“The Court’s 4-4 ‘tie’ is a wonderful outcome and affirms the 2014 Fifth Circuit ruling, which was a victory for Tribal Nations,” said Sarah Deer, co-author of the NIWRC’s amicus brief. “Now the victim can finally proceed to trial on the merits.  Whether Dollar General chooses to settle the case out of court or proceed with a trial, the jurisdiction of the Mississippi Choctaw tribal court has been solidified.  Our work will continue to ensure that all Tribal Nations have the ability to hear cases where their citizens are harmed by abuse and violence.”

As a result of the Supreme Court’s decision today, the case will return to MBCI’s District Court, where the case will be litigated on the merits.